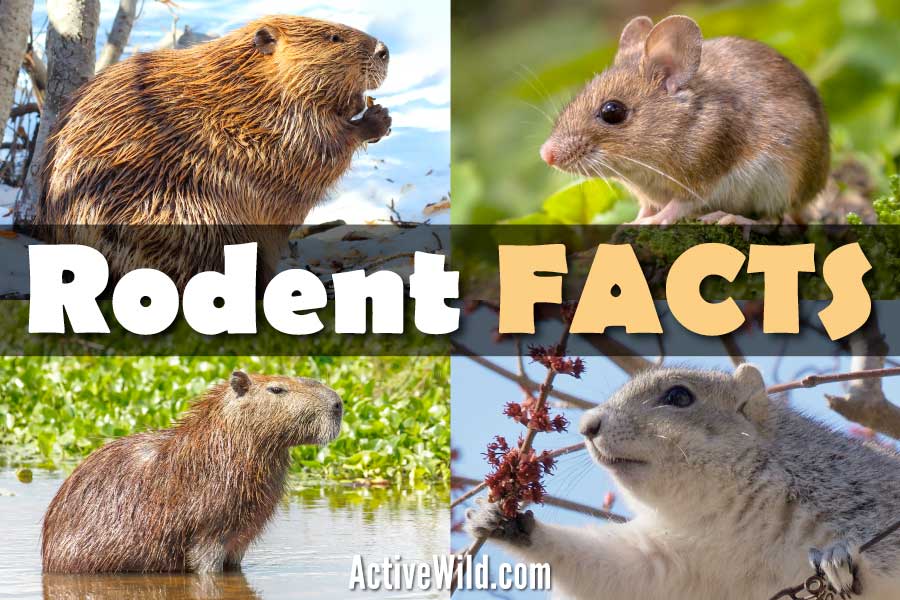 As the old saying goes, you’re never more than six feet away from a rat, and there is probably some truth in that statement; rodents–the group of mammals that includes rats and mice–are a hugely successful group of animals. Rodents are found–often in large numbers–in a wide range of habitats and on every continent except Antarctica.

What Is A Rodent?

A rodent is a mammal in the order Rodentia. Familiar rodents include mice, rats, squirrels, beavers, porcupines and hamsters.

Most rodents are small animals. Although the largest rodent, the capybara, is around the size of a medium-sized dog, most are much smaller.

Rodents are mammals, and therefore possess characteristics common to all mammals. These include: having hair, being warm-blooded, having four limbs, and (in female mammals) producing milk to feed their young.

The name “rodent” comes from the Latin word “rodere”, which means to gnaw; all rodents are gnawing animals. Many of the characteristics that separate rodents from other mammals are related to gnawing.

Although rodents can vary greatly in appearance, all show remarkable similarities in the structure of their skulls and teeth.

Rodents have a pair of very large incisor teeth in both the upper and lower jaws. These are the teeth used for gnawing. A rodent’s incisors are unusual in that they continue to grow throughout the rodent’s lifetime. This is vitally important for an animal that spends much of its life chewing on seeds, nuts, and other tough plant material.

When a rodent gnaws, it grinds the top and bottom incisors against one another, resulting in the teeth becoming honed as sharp as chisels – ideal tools for biting.

Another unusual characteristic of rodents is that they lack canine teeth and some of the premolars. Instead, they have a gap (known as a “diastema”) between the incisors and the molars.

In some species, this gap allows food to pass from the sides of the mouth and into cheek pouches for storage. In others, the toothless area is covered by a fold of skin from the upper lip. This allows the animal to move undigestible items (such as bits of nutshell) out of its mouth while continuing to gnaw on the digestible food inside.

Rodents have specialized musculature on their skulls that enables them to operate their unusual teeth in efficient ways.

Anyone who has watched a squirrel eating a nut will be aware of just how skilled (and fast) these animals are at getting to the edible parts inside!

There are around 2,500 rodent species. In terms of number of species, the order Rodentia is the largest mammalian order.

An incredible 40 to 50% of all mammal species are rodents, and there are almost twice as many rodents as there are bats, which make up the next-largest mammalian order.

Rodents live on every continent except Antarctica. Their various adaptations have made them successful in most terrestrial habitats, from deserts to Arctic tundra.

Types of rodent include mice, rats, squirrels, porcupines, beavers, guinea pigs, capybaras and naked mole rats. The order Rodentia is divided into 5 suborders and around 30 families.

Muridae (whose members are known as “murids”) represent more than 1,100 species; almost half of all rodents. This means that around a quarter of all mammal species are either mice, rats, hamsters, voles, muskrats, lemmings, gerbils, or other murids.

Rodent classification is complex and ongoing; the grouping of rodents is liable to change as we learn more about rodents and the animal kingdom in general.

Other Characteristics of Rodents

In general, rodents are not large animals; most weigh less than 6.5 lbs (3 kg).

The largest extant (living) species is the capybara (Hydrochoerus hydrochaeris) of South America. Adults of this species can reach 146 lbs (66 kg), with a body length of up to 53 in (135 cm).

In contrast, the smallest rodent is the pygmy jerboa (Salpingotulus michaelis), a species native to the hot, sandy deserts of Pakistan. It has a mass of about 0.2 oz (5 g) and a body length of 2 in (5 cm), excluding its very long tail.

Rodents are mostly herbivorous, eating seeds, bark, leaves and fruit, although many will also feed on insects at times.

Grasshopper mice (found in the USA and Mexico) are carnivorous, feeding on insects, spiders, worms and even snakes.

The rats and mice that live in association with human settlements are notoriously omnivorous, and will eat almost anything they come across.

Rodents show a variety of activity patterns, with some being diurnal (active during the daytime), while others are nocturnal.

Many rodents hibernate during the winter. Some species of chipmunks, dormice, squirrels and prairie dogs sleep for between 5 and 8 months of each year; during hibernation their body temperatures and metabolic rates decrease, thereby reducing their need for food.

The Arctic ground squirrel (Urocitellus parryii) hibernates through the winter months. While hibernating its body temperature can get as low as 28.6oF (-3oC).

Many desert species, in addition to hibernating during the winter, have a daily pattern of dormancy, sleeping in their burrows during the heat of the day and only emerging at night. This low-energy lifestyle allows them to survive on food with low nutritional value.

As well as the familiar scurrying movement of mice and rats, rodents employ many other forms of locomotion.

The elongated hind limbs of jerboas, gerbils, kangaroo rats and springhares allow them hop at break-neck speeds over desert flats.

Another group of arboreal rodents, the flying squirrels, have a furry membrane of skin between their forelegs and hindlegs. This acts as a parachute, allowing them to glide from tree to tree.

Water rats, coypus, muskrats and beavers are rodents whose primary form of locomotion is swimming. They have thick, water4proof coats and many species are equipped with webbed feet and thick tails for moving through the water.

Although many rodents are excellent burrowers, the molerats of the African continent must surely take the digging prize. These strange fossorial (burrowing) rodents are, confusingly, neither moles nor rats. Instead, they belong to their own family, Bathyergidae.

Molerats have cylindrical bodies, hardly any neck, tiny (almost blind) eyes and no external ears; all are adaptations for moving around underground. The molerat excavates its tunnels using its enormous, protruding incisors – literally gnawing its way through the ground.

Although some rodent species live solitary lives, only coming together briefly to mate (for example edible dormice and pocket gophers), the majority live in small groups made up of family members.

Members of these groups forage and defend their territories together.

Ground squirrels and prairie dogs are well-known for living in systems of underground tunnels and chambers.

Nests built by packrat groups in the western desert regions of North America are so resilient that researchers have analyzed their contents in order to investigate changes in vegetation and climate over 50,000 years.

The most extreme form of social behavior among rodents is that exhibited by naked molerats (Heterocephalus glaber) from east Africa.

These burrowing animals live in underground colonies of up to 80 individuals. A dominant female (a queen) breeds with a few breeding males, but the remaining females in the group are sterile and function as workers only. This highly evolved eusocial behavior is reminiscent of that found in bee, ant and wasp societies.

Rodents produce offspring that are either altricial (born naked, underdeveloped and with closed eyes) or precocial (born fully developed, covered with fur and with open eyes).

In both cases, mothers nurse their offspring and care for them until they are weaned.  Some species (for example types of rats and mice) are able to produce several litters in one year, while others (for example beavers and porcupines) have longer gestation and weaning periods, and will produce only one litter a year.

Rodents are known for being prolific breeders. This has enabled them to colonize many different habitats and build up large populations.

Early mammals co-existed with dinosaurs for over 100 million years and, although these early forms were sometimes rodent-like, they were not true rodents.

The first fossils of true rodents are found in rocks from the late Paleocene epoch, about 66 million years ago. This time period coincides roughly with the extinction of the dinosaurs, and it is likely that many ecological niches left empty at this time were taken over by rodents.

The earliest rodents are thought to have evolved in Asia, when it was part of a northern supercontinent called Laurasia.

As rodents colonized new territories and habitats, they diversified into different types, a process called adaptive radiation. The ability to breed rapidly and feed opportunistically enabled rodents to quickly adapt to a wide range of different habitats.

Rodents first arrived in Australia, via the islands of Indonesia, around 5 million years ago. The only rodents found on the continent are murids (members of the family Muridae. Today around 60 different species are present on the continent.

Rodents have long been associated with man. Species such as mice and rats have spread to many parts of the world in part due to their ability to live alongside humans.

Rodents are not always welcomed by human communities; they are well-known for being transmitters of infectious diseases (such as the bubonic plague) and can also decimate crops.

There are several cases in which the introduction of rats to oceanic islands has resulted in the extinction of ground-nesting birds and other indigenous animals.

Rodents are often viewed as pests and their populations controlled using methods such as trapping and poisoning.

Despite their often negative image, only a few rodent species are responsible for harmful activities; the great majority of rodent species live in wild places and have little or no direct effect on humans.

Rodents provide many benefits to humans. Many societies hunt rodents for food, and species such as dormice, guinea pigs and capybaras have been farmed for their meat.

The dense fur of chinchillas and coypus has been used for making clothing, while the relatively docile nature of many rodent species makes them wonderful pets.

Controversially, white mice and rats are used extensively in medical, genetic and cosmetic research and rats have even been trained to locate landmines hidden under the soil.

Rodents play an essential part in the ecosystems of many (if not most) terrestrial ecosystems. Often found near the bottom of the food chain, rodents provide a valuable source of food for many other mammals, as well as birds and reptiles.

Rodents should not be overlooked due to their small size and familiarity. Their presence is vitally important and it is important that we protect their habitats and ensure that they survive into the future.