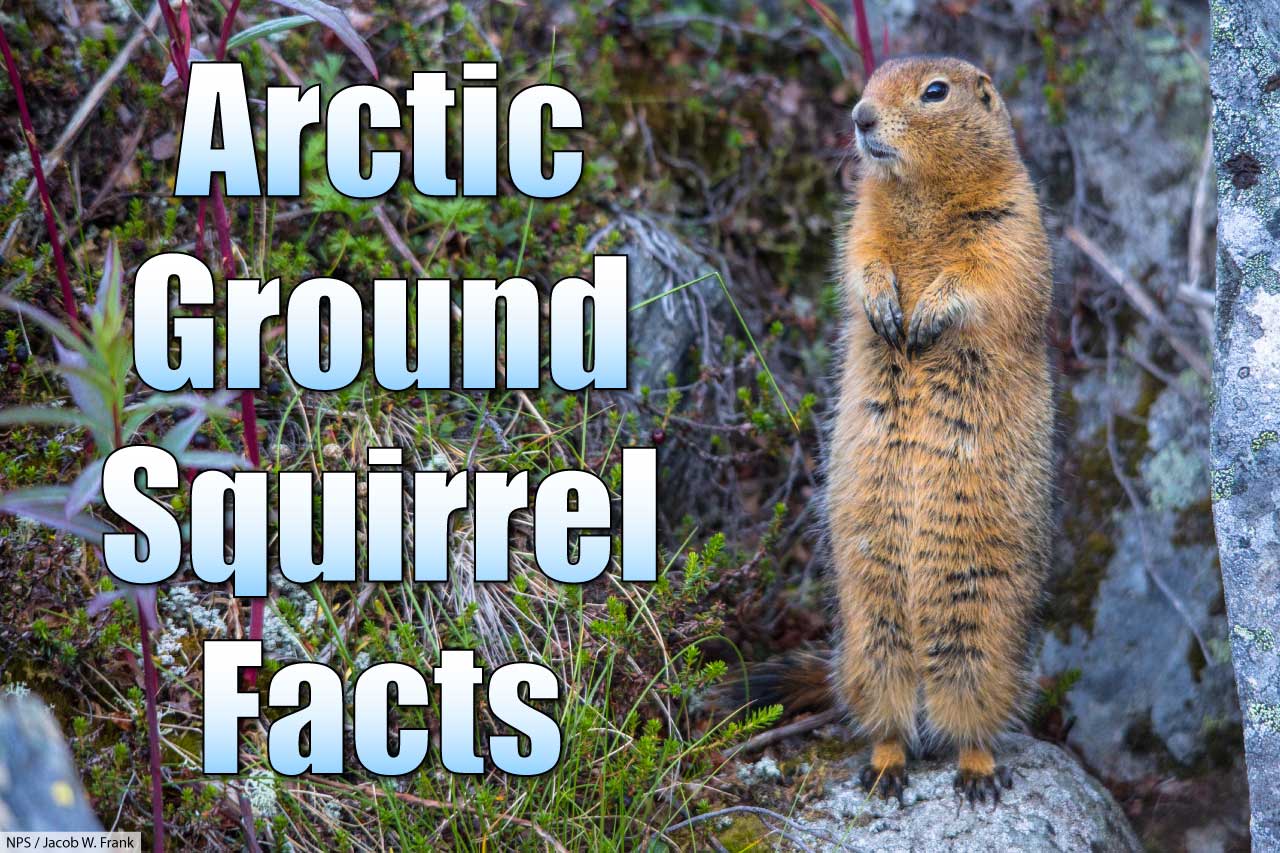 Read on to find out more about this fascinating Arctic rodent….

The Arctic ground squirrel is a rodent that lives in Arctic regions of North America and Russia. It is found further north than any other ground squirrel, and is known for its exceptionally long hibernation period.

In fact, this Arctic rodent can hibernate for almost three quarters of the year; that’s longer than any other animal!

The species’ coat is traditionally used in the ruffs of parka jackets. This practice has led to the species’ alternative name of ‘parka squirrel’.

The Arctic ground squirrel has a cylindrical body and short, powerful limbs. Its snout is short and its ears small and round. White rings surround its large eyes. The feet have sharp claws and soft pads on the soles. The tail is flat, bushy and relatively short. Male Arctic ground squirrels are larger than females.

The Arctic ground squirrel’s coat is reddish-grey and silver with red-brown patches on the head and legs. The undersides are pale grey / white, the tail dark.

The squirrel molts twice a year. Its summer coat is soft and fine and reddish-brown in color. In winter the coat is thick and stiff, and becomes more silver-grey in color.

Where Is The Arctic Ground Squirrel Found?

The Arctic ground squirrel is found in Alaska and in Arctic regions of eastern Russia and Canada.

Although the species is found across an extremely wide area (covering an estimated 2 million km2 / 770,000 sq. mi.), its distribution is patchy; it is present in high numbers in some areas but absent in others.

The Arctic ground squirrel is found in a wide range of both open and forested habitats. These include: mountain slopes, river valleys, lake shores, open meadows, coastal sand ridges, forest clearings and meadow steppes. It lives at elevations of up to 1,400 m (4,600 ft.).

Ideal habitat for the Arctic ground squirrel consists of sloping ground with sandy soil and sparse vegetation (the sandy soil is easy to burrow in and the lack of thick vegetation makes it easier to spot predators).

The Arctic ground squirrel lives in colonies consisting of a dominant male, several closely-related females and their young.

The colonies live in shallow burrow systems. The burrows are used for escaping from predators, as a den for expectant mothers, and as a winter refuge. Burrows used for hibernating are between 5 and 8 feet below the ground.

Nests within the burrow systems are lined with dry grass, leaves, lichens and fur.

During summer, the squirrels are generally active between 5 am and 11 pm. They return to their burrows at night and during periods of bad weather.

The Arctic ground squirrel hibernates for up to nine months of the year. This ‘extreme hibernation’ is an adaptation that enables the species to survive long periods of extreme cold and lack of food.

Females hibernate longer than males, retreating to their burrows in early August only to emerge in late April. Males hibernate from late September to early April.

The squirrels may wake and emerge from their burrows for short periods during the hibernation period.

The Arctic ground squirrel communicates via scent, touch and a range of vocalizations. Male squirrels use scent glands on their cheeks and back to mark their territories. When individuals meet, they often press their noses together.

Vocalizations used by the squirrel range from screeches to rattles. Arctic ground squirrels vary their alarm calls depending on the type of threat they are facing. A deep guttural sound indicates a land-based predator, while a whistle-like call warns of a bird of prey.

The Arctic ground squirrel mating season begins when the squirrels first emerge from hibernation and lasts for around 2 weeks.

Violent encounters between males are frequent during this time as they fight for control over territories and access to the females that reside there. The female is only receptive for 12 hours and may mate with multiple males during that time.

Gestation lasts 25 to 30 days, after which the female gives birth to a litter of 5 to 10 pups in an underground burrow.

The young weigh around 10 g (0.35 oz.) at birth and are hairless, toothless and blind. The female nurses the pups for up to 35 days. Maternal responsibilities are often shared with related females.

The young grow extremely fast. By 8 to 10 weeks of age they are independent and appear above ground.

After leaving their mother, male squirrels are more likely to disperse while females tend to stay in the same area.

What Do Arctic Ground Squirrels Eat?

During the summer, the squirrel’s diet contains a larger ratio of seeds and fruit. The animals increase their body fat by 30 to 41.5% in preparation for hibernation.

Male squirrels also store grass and nuts inside their hibernation chambers – they rely on this cache of food when they re-emerge from hibernation before the females.

The Arctic ground squirrel is an important prey species to many animals. The species’ land-based predators include the Arctic fox, red fox, wolverine, lynx and grizzly bear.

The main anti-predatory strategies of the squirrels are constantly scanning the environment when above the ground and using alarm calls.

Is The Arctic Ground Squirrel Endangered?

The Arctic ground squirrel is rated ‘Least Concern’ by the IUCN.

The species is found across a wide range and has a large population. Although unsustainable hunting (both for the squirrel’s meat and for its skin) threatens some local populations, it does not threaten the species as a whole.