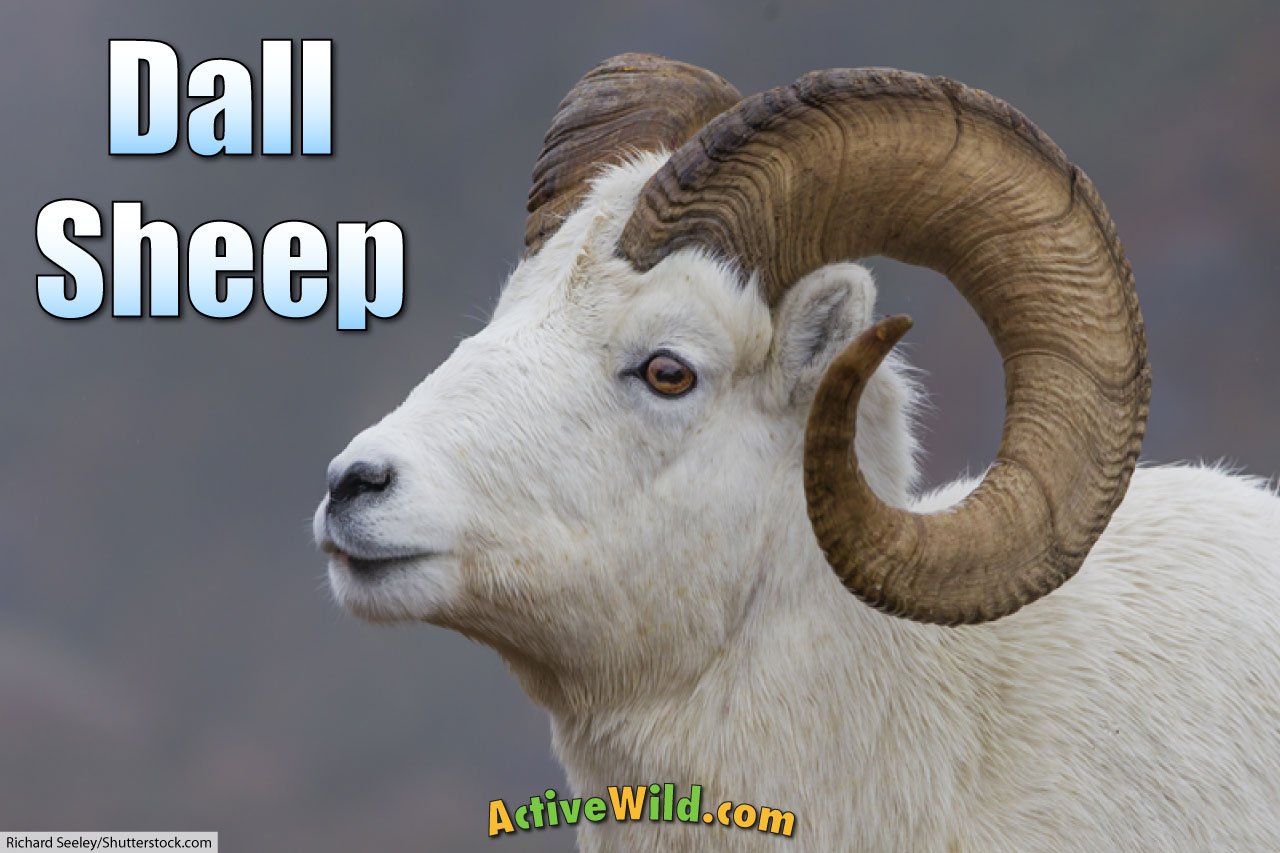 Dall sheep facts, pictures and information. The Dall sheep is an animal of rocky, mountainous terrain. Native to North America, it is found in subarctic regions of Alaska and Canada. In this inhospitable habitat, its white coat provides camouflage against the snow.

Read on to find out more about this hardy mountain animal…

Dall Sheep Facts At A Glance

Other interesting Dall sheep fact: A Dall sheep’s horns grow fastest during the summer, causing a pattern of rings that can be used to determine its age.

The Dall sheep is a wild sheep native to North America. It lives in mountainous regions and is well-known for its white color, which provides camouflage against the snow.

The species is named after American naturalist William Healey Dall. (Other animals named after Dall include the Dall’s porpoise and several species of mollusk.)

The division into separate subspecies has been questioned; some studies have found little genetic difference between the two.

(On this page, whenever we refer to the ‘Dall sheep’ we mean both subspecies unless an individual subspecies is specifically named.)

In the video below you can see wild Dall sheep in their natural environment. (You may want to turn the volume down at first due to the wind noise.)

The Dall sheep is a medium-sized sheep with a robust body, slender legs and a short tail. The coat of the Dall sheep subspecies (O. d. dalli) is pure white to creamy-white in color.

The Stone sheep’s (O. d. stonei) coat ranges from gray to black. This subspecies has a black tail and a white patch on the rump.

Interbreeding between the subspecies can occur. This results in young with an intermediate coat.

A third color type, known as the Fannin sheep, has a white head and rump and a dark ‘saddle’ marking on its back.

The Dall sheep’s coat consists of long, stiff outer guard hairs with an undercoat of fine wool. The sheep molts annually from March to July. The winter coat can be up to 5 cm (2 in) thick.

Both males (rams) and females (ewes) have horns.

The ram’s horns are thick, deeply-ridged with sharp tips. They curl round as they grow, forming a full circle in around 8 years. The horns can make up 8 – 10% of a mature ram’s weight.

The ewe’s horns are shorter, thinner and only slightly curved.

The Dall sheep does not shed its horns, which grow continually throughout the sheep’s lifetime (although growth slows in the later years). The horns grow fastest during the summer. A sheep’s age can be ascertained by counting the ridges (which correspond to the faster summer growth).

The Dall sheep’s alternative name, ‘thinhorn’, refers to the species’ relatively thin horns compared to those of the bighorn sheep (another North American sheep species).

Where Is The Dall Sheep Found?

The Dall sheep is native to North America. The species is only found in mountainous regions of central and northern Alaska and western Canada.

Areas in Alaska in which the Dall sheep is found include: Kenai, Chugach, Mentasta, Nutzotin, and northern Wrangell Mountains, the Denali National Park and Preserve, Tanana Hills, White Mountains and Brooks Range.

In Canada, the Dall sheep is found in northern British Columbia, Yukon (including the Kluane National Park and Reserve) and Northwest territories.

The Dall sheep typically inhabits dry, mountainous areas in subarctic (bordering the Arctic Circle) regions. It lives in alpine (above the tree line) conditions and is present at elevations of up to around 2,000 m (6,560 ft.).

Dall sheep habitat consists of rocky hillsides, steep cliffs, outcrops and gorges. The species may also be found in alpine meadows, although it is rarely found far from rugged ground into which it can flee from predators.

The sheep is often found in windswept areas where snow is prevented from building up. During winter, the species often migrates to lower ground where there is less snow.

The Dall sheep is a social animal, with both males and females living in groups.

Mature rams live together in small bands. These ‘bachelor groups’ typically consist of around 15 individuals.

Ewes, lambs and young rams live in large flocks. Nursery groups are common in these flocks, with one or two ewes keeping an eye on several lambs while the other females feed.

Typically, adult males and females only come together during the mating season.

The Dall sheep is well-known for its head-butting fight ritual, used to establish dominance among males.

A social hierarchy exists among the rams. The top spots are held by older, large-horned rams: it is these dominant individuals who will successfully breed during the mating season.

Dominance is often established without fighting, with the sheep simply ‘sizing each other up’ without resorting to violence.

However, when two similarly-sized males meet a fight may ensue. Although fights occur sporadically throughout the year they are more common during the rut (mating season).

Fights between similarly-matched opponents can be spectacular, with each sheep retreating up to 40 feet before charging and butting its opponent. The sound of these collisions can be heard over half a mile away.

You can see footage of Dall sheep fighting in the video below (skip to around the 1 minute mark for the action to begin).

Although the sheeps’ brains are protected by a double layer of bone, fights can be hazardous for the participants. Battling rams can sustain injuries and may even be pushed off cliff edges.

Fighting and butting among ewes can occur but is rare.

The mating season of the Dall sheep occurs in November and December. The sheep are polygynous (i.e. males have several mates), with dominant males mating with more females than younger males lower down in the social hierarchy.

After mating has taken place, the male guards the female up to 3 days before moving on to find a new mate.

The gestation period of the Dall sheep is around 4.5 months. Lambs are born between late May and early June. The ewe finds a secluded spot protected by rugged cliffs and gives birth to a single lamb (twins are rare).

The newborn lamb is able to stand within 30 minutes of being born and can start traveling with its mother within 24 hours.

What Do Dall Sheep Eat? 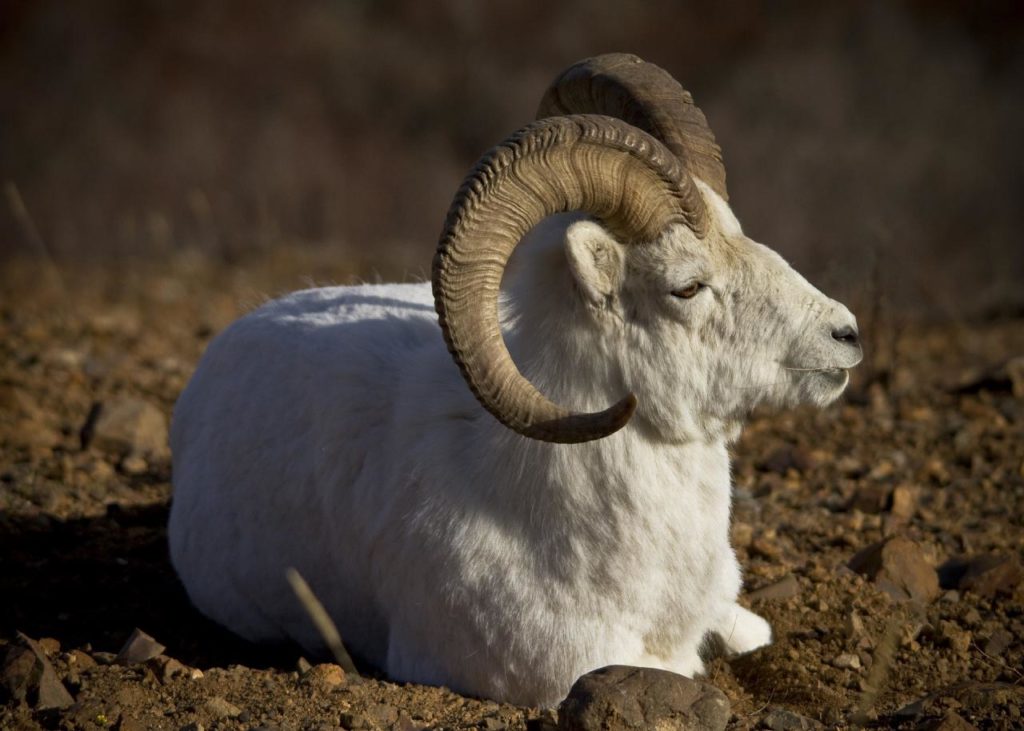 During the summer, the animal’s diet is varied and can include 50 to 120 different species of plants. In contrast, its winter diet is restricted to between 10 and 15 species and consists mainly of frozen grass, sedge stems, lichen and moss.

In the spring, many Dall sheep populations travel several miles to visit mineral licks, where they consume the mineral-rich soil to supplement their diet. (A mineral lick is an area in which minerals occur naturally within the soil.)

Known predators of Dall sheep include gray wolves, coyotes, black bears, grizzly bears, wolverines and lynxes. During the first few weeks of its life, a young Dall sheep is also vulnerable to predation by golden eagles.

The animal’s main strategy to avoid predation is to inhabit rugged terrain with steep cliffs.

Is The Dall Sheep Endangered?

The species is widely distributed and its population is considered stable with no major threats.

Dall sheep generally occupy remote areas. Here they are mostly unaffected by human activity. The sheep are hunted for sport or for food in some areas, but usually only in small numbers.