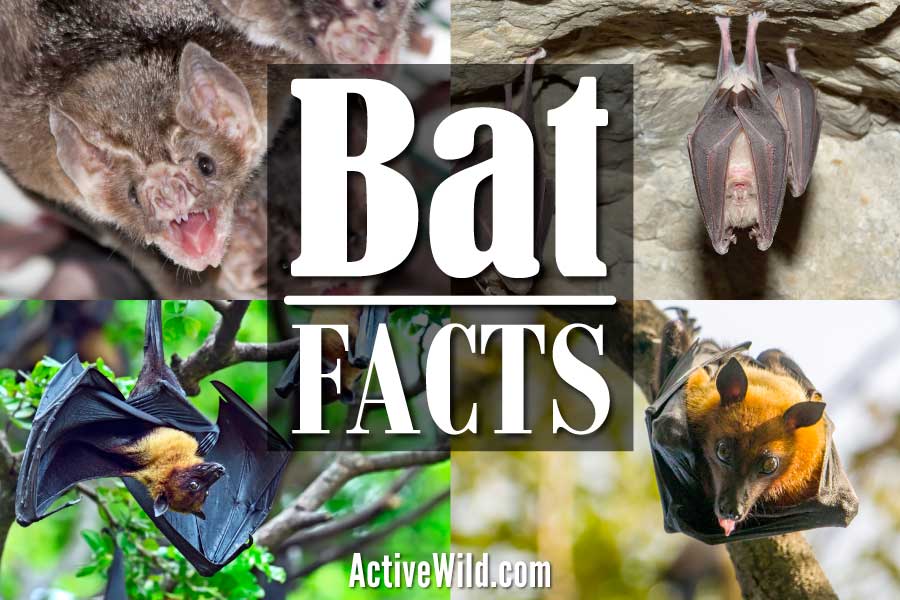 Representing an incredible 20% of all mammal species, bats are the world’s only flying mammals. On this page you’ll find a complete introduction to the lives and behavior of these unique animals…

What is a Bat?

Bats are winged, flying mammals in the order Chiroptera. They are the only mammals capable of true, flapping flight.

The name Chiroptera is derived from the Greek words “cheir” and “pteron”, meaning “hand” and “wing”.

Although their wings function in a similar way to those of birds, bats don’t have feathers. Instead, their wings consist of a thin membrane stretched between the bones of the arms, elongated fingers, and legs.

Bats are found in most habitats apart from extreme deserts and polar regions, and are a familiar sight in many urban areas.

There are more than 1,100 living bat species; together they represent almost 20 percent of all known mammal species.

In recent times, bats have been implicated in the spread of diseases such as SARS. Although these diseases are not naturally passed directly to humans from bats, they may originate in areas where bats and other types of animal are kept in close proximity to each other and subsequently handled or consumed by humans.

Bat skeletons are small and light, and as a result do not fossilize easily. There is therefore relatively little fossil evidence of early bats. Not much is known about their evolutionary history and how an early, four-legged terrestrial mammal evolved wings and the ability to fly.

The oldest-known bat species is Icaronycteris index. A complete fossil of this early bat was found in the Green River formation of Wyoming. It has been dated to the early Eocene, and thought to have lived approximately 52.2 million years ago.

Icaronycteris index had a wingspan of 37 centimeters (15 in). At the end of each of its first wing fingers was a claw. The species is believed to have hunted using echolocation, just like modern microbats (see below).

The fossil gives few clues about how, or when, the forelimbs of bats first became adapted as wings. Paleontologists will have to find more fossils, particularly those dated between 50 and 66 million years ago, if they wish to solve this mystery.

Although we use the traditional bat orders of microbats and megabats on this page, recent molecular evidence suggests that some microbats are more closely-related to megabats than they are to other microbats.

There are around 930 species of microbats. Together they make up the suborder Microchiroptera.

Microbats occur all over the world. Most are insectivorous (insect-eating) and use echolocation, rather than sight, to locate their prey.

The 197 species of megabat that make up the suborder Megachiroptera feed predominantly on fruit, pollen and nectar. This group includes the fruit bats found in tropical regions in the Old World.

Most megabats do not echolocate and instead depend on sight and smell to find their food.

The classification of bats is a difficult business and there is still debate over which groups of bats belong together in each suborder.

Bat wings consist of a thin membrane, the patagium, which extends from the shoulders, around the tips of the fingers, all the way to the feet. This membrane continues from inside each leg, and either partially, or wholly, encloses the tail.

The patagium is richly supplied with blood vessels that supply oxygen to the muscles. Because of this, bats can lose a lot of heat from their wings as they fly.

It’s thought that bats are able to absorb oxygen directly from the air into the blood vessels in their thin wings.

Bats have relatively large hearts, when compared to similarly sized mammals in different orders; this is another adaptation to supply oxygen while in flight.

The elongated fingers of a bat are flexible and under individual control, just like your own fingers. This enables bats to make fine adjustments to the shape of their wings and allows for quick changes in direction.

Megabats generally have 2 claws on each hand, whereas the microbats have only one – on the thumb. These claws are used for clinging to surfaces, such as tree trunks, rock faces and walls, and enable bats to clamber around.

When roosting, a bat folds its wings and may wrap them around its body to help regulate its temperature.

Most of the microbats, as well as some species of megabat, use echolocation to detect prey and obstacles in their environment while hunting at night.

These bats send out a stream of very loud clicks. The sounds bounce off structures and return to the bat in the form of echoes, helping the bat to build up a ‘picture’ of its surroundings.

The sounds produced by a bat while echolocating are at too high a frequency for humans to hear. Bats have evolved elaborate external ears, and noses shaped like disks or leaves, that help them receive the incoming echoes.

Studies have shown that bats often use their wing and tail membranes to scoop up their insect prey and direct it towards their mouth; this leaves the head area free to continue with the process of echolocation until the last moment, when the prey is eaten.

Some insect species produce similar ultrasonic sounds, effectively tricking a hungry bat into thinking that it is about to fly into an obstacle. This causes the bat to change course, allowing the insect to fly away unharmed.

Almost all bat species are nocturnal, beginning their foraging as dusk falls. This helps them to remain cool and to avoid daytime predators.

During the daytime, bats roost in dark, secluded places such as caves, crevices and abandoned buildings, or in the dense canopies of trees.

While roosting bats use their claws to either hang upside down or cling to a surface.

Many species go into a state of torpor during their day-time roost. This can see their body temperatures dropping to between 43 and 86 °F (6 and 30 °C),

This energy-saving adaptation is important; bats store very little fat, as this would make them heavier and affect their flying ability.

Many bat species either undergo seasonal hibernation, during which they avoid extreme environmental conditions, or migrate to more hospitable locations.

Bats need to eat large quantities of food due to their high metabolic rates and the high energetic demands of flying.

Frugivorous (fruit-eating) bats may consume as much as twice their own body weight in fruit each night. They often take ripe fruit back to their roost, where they suck out the juice, leaving the pulp and seeds to fall to the ground.

Nectarivores (nectar-eating species) have elongated snouts and very long, thin tongues that end in bristles; this enables them to reach into the tube of a flower and collect the sugary nectar. As they push their heads into the flower, pollen becomes stuck to their fur; they carry this pollen to the next flower and so act as pollinating agents.

The flowers of many species of plant open only at night to allow for pollination by bats.

Insectivorous bats prey on a wide variety of night-flying insects, including moths, mosquitoes, crickets, beetles and flies. They may consume up to 120 percent of their body mass in insects each night.

Research has shown that the little brown bat Myotis lucifugus can capture 500-600 mosquitoes per hour.

There are bat species that eat other types of food, including fish, frogs and lizards, but they are not as common.

The three species of vampire bat that make up the subfamily Desmodontinae feed only on blood. These bats, which are found in Central and South America, have razor-sharp incisors that are used to make a cut in the skin of a sleeping mammal or bird. The bat then laps up the blood as it flows from the wound.

Most bat species are social, living in large groups and forming communal roosts. They can recognize individuals and form bonds through sharing food and grooming one another.

Living in large groups helps reduce an individual’s chance of being predated, and improves the chance of mating and breeding.

Most bats are polygynous, meaning that one male mates with several females. The young are born mostly in spring, and each female gives birth to only one young pup.

In many species, the pregnant females form maternity colonies, where they help each other with birthing and caring for the offspring.

Pups are born hairless and underdeveloped, but able to cling steadfastly to their mother’s fur. In less than 80 days, the young are weaned, covered in fur, and able to fly.

Throughout history, people have associated bats with graveyards, witches and the underworld. In fables from long ago, witches are described as riding on their broomsticks, against a full moon, and accompanied by a cloud of bats.

As a consequence, many people see bats as creatures to be feared and reviled. Even the Bible (Deut. 14) tells us that bats fall into the category of unclean animals that must not be eaten.

In truth, bats are largely undeserving of their bad reputation. They play an important ecological role and in many parts of the world their presence is highly beneficial to humans.

Nectarivorous bats are important pollinators of many plants in tropical and subtropical regions, including at least 200 economically important species, such as bananas, mangoes, dates, figs, peaches and avocados.

In addition, bat droppings (guano) are a source of fertilizer that can be used to enrich soil for farming.

Despite these useful ecological contributions, bats remain disliked and maligned by people in many parts of the world. These negative views of bats are not always without justification.

Fruit bats can cause damage to fruits grown for human consumption, and the cuts inflicted by vampire bats on domestic livestock provide sites in which parasites may lay eggs, leading to infections.

Bats also harbor pests and diseases that are transmissible to humans. These include ectoparasites such as fleas and mites that can also infest humans. More seriously, bat colonies are natural reservoirs for rabies and viral encephalitis (Nipah), both of which can kill humans.

In recent times, bats have been implicated in the emergence of SARS (Sever Acute Respiratory Syndrome), and other coronaviruses, including COVID-19

It is important to note that bats do not infect people with these diseases directly; instead, it is human activities such as keeping bats in poor conditions alongside other species, and the handling and consumption of bats and other species, that enable viruses to pass to humans.

Bats are hunted for food by people in parts of Africa, Asia and the Pacific Rim, and in some regions are considered a delicacy.