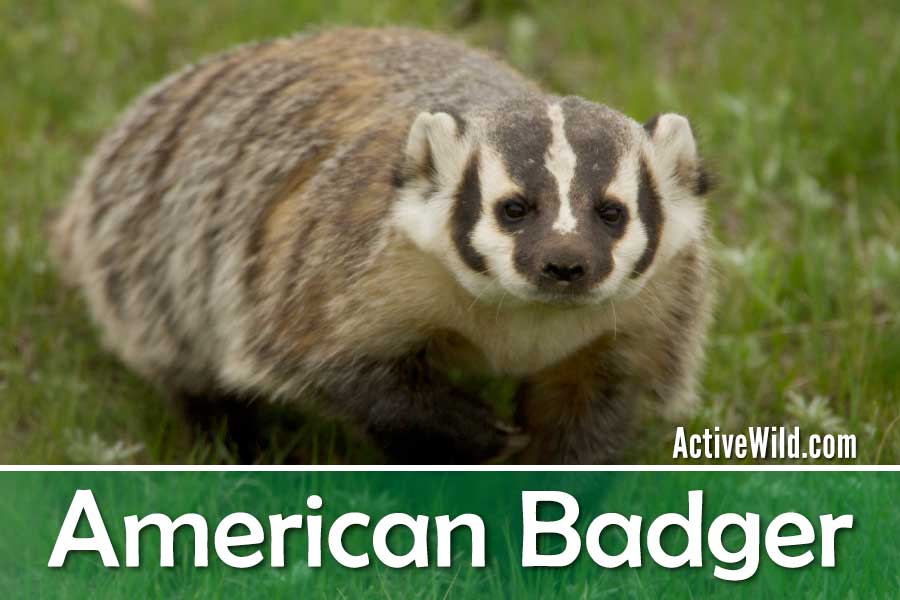 American badger facts, pictures and information. Get the lowdown on this North American grassland predator…

What Is An American Badger?

The American badger is a medium-sized, stocky mammal with grizzled grey-brown fur and characteristic black and white stripes on its face. It is a relatively common predator in grassland areas of North America. The species lives in burrows and preys on a variety of small animals.

American badgers are stocky, powerful animals with short legs and very large claws (up to 2 in, or 5cm, in some cases). Their bodies are held low to the ground, which helps with hunting and burrowing.

American badgers have a distinctive swaggering gait which makes them easy to recognize when they are on the move.

Badgers all over the world have characteristic black and white patterns on their coats, and the American badger is no exception. Although the fur on the body is a brownish-grey colour, there are striking white stripes and black patches on the American badger’s face.

The white stripe on the face extends from the tip of the nose to the back of the head; in some subspecies this white stripe extends all the way back to the base of the tail.

Badgers are mammals in the order Carnivora. They belong to the family Mustelidae (the weasel family), along with otters, ferrets, minks, polecats, weasels and wolverines.

Mustelidae is the largest family in the order Carnivora with approximately 60 different species.

There are 11 species of badger including the American badger. Other well-known badgers include the larger (but less predatory) European badger (Meles meles) and the slightly smaller honey badger (Mellivora capensis), which is found in Africa.

The American badger is the only species of badger found in the Americas.

As well as being geographically separate, the American badger is not closely related to the other living badgers; its closest relative is the prehistoric species Chamitataxus, which lived around 6 million years ago during the late Miocene Epoch.

Where are American Badgers Found?

The distribution of American badgers extends from south-central Canada, throughout the western regions of the United States, and southwards into northern Mexico. This is one of the largest distributions of any species of badger.

Within their range, American badgers may be found at various altitudes, sometimes as high up as 12,000 ft (3,600 m), where they inhabit alpine meadows. In general, however, American badgers prefer warmer locations at lower elevations. The species can even be found in semi-arid deserts.

Typical American badger habitat is wide-open plains with dry grasslands. The species can be found in grassy fields, pastures, farmlands and alpine meadows.

In some parts of its range the American badger inhabits desert scrublands, and the species is also found in open chaparral with less than 50 percent plant cover.

An important requirement of American badger habitat is soil that is soft and loose. This makes it easier for the badger to dig up its prey, which consists mainly of burrowing animals.

The presence of abundant prey is critical for a habitat to be able to support a healthy American badger population.

The diet of the American badger consists of many different species of burrowing animals, including prairie dogs, pocket gophers, marmots, kangaroo rats and voles. The species is also a very successful predator of snakes. Lizards, frogs, birds and insects also feature in the animal’s diet.

The species is not entirely carnivorous; it will also eat honey and several types of plants.

The American badger typically hunts on its own during the hours of darkness.

A hunting method regularly employed by the badger is to dig prey animals from out of their burrows. The species has even been known to block up the exits of the burrow systems of its prey, enabling it to reach the captive animals before they can flee.

An interesting aspect of American badger hunting behavior is its cooperation with coyotes.

Burrowing prey such as ground squirrels have different responses to each of the predators. When faced with a badger, the squirrels attempt to escape from the burrow and flee; when faced with a coyote, they head to their burrow for safety.

When both predators hunt together, some squirrels flee away from their burrows, only to be intercepted by the coyote. Others flee into their burrows, where they are caught by the badger.

The catch rate of both predators is increased when they hunt co-operatively in this manner.

Unlike the European badger, which lives in groups, the American badger is a solitary animal. The species only actively seeks out the company of another badger in order to mate.

The American badger is less active in winter and, although it does not undergo true hibernation, it will remain in a torpid state, with reduced metabolism and body temperature, for long periods.

Individual badgers maintain a home range that varies in size depending on the season and the abundance of prey. 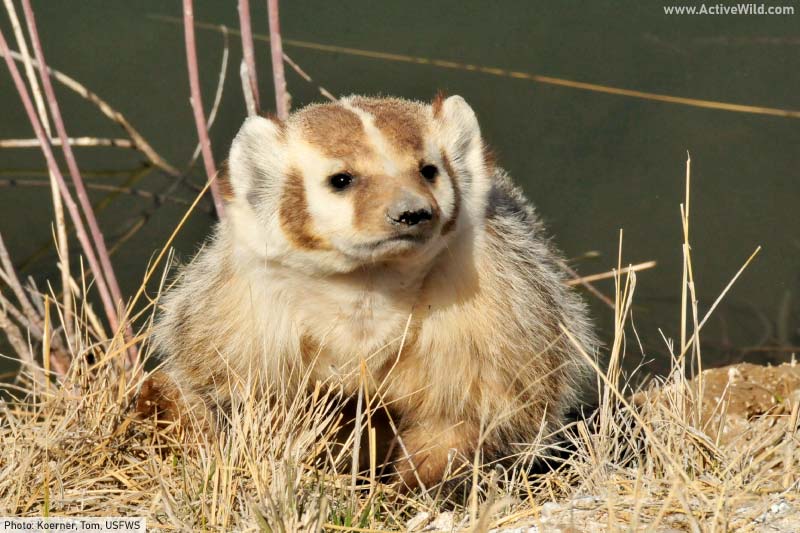 The American badger is a fossorial (burrowing) animal. It has several adaptations for this lifestyle, including: a flattened body, pointed snout, conical head, very strong legs and long, powerful claws, all of which help the animal to push its way through the soil.

The American badger’s enormous claws help it to break up the soil, and its eyes are protected from sand grains by a nictitating membrane (a transparent “third eyelid”).

The badger’s burrow provides protection and shelter, and a location for females to give birth and raise their young.

Typically, an American badger will excavate and enlarge a burrow system originally dug by another species, such as prairie dogs or ground squirrels. 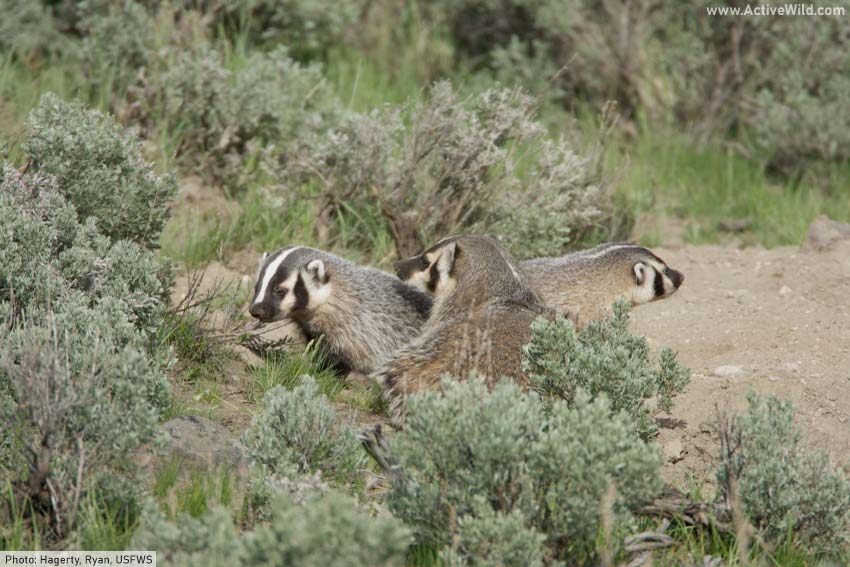 Mating takes place in fall. During this time the home ranges of individual badgers increase and overlap, enabling the usually solitary animals to come into contact with potential mating partners.

After mating, the implantation of the embryo is delayed, only beginning under suitable environmental conditions. This means that implantation can occur up to six months after mating.

The American badger gives birth to a litter of between 1 and 5 pups in springtime (around April or May). Prior to giving birth the female lines the burrow with soft materials such a grass.

American badger pups are born with their eyes sealed closed and with a very thin coat of hair. They are cared for by their mother until they are about 5 to 6 months old, at which time they leave the burrow and begin to live independently.

The lifespan of the American badger is around 10 years in the wild, although it may live much longer in captivity.

Threats To The American Badger

Although the conservation status of the American badger is Least Concern, the species’ population has shown a significant decrease in recent years.

Loss of habitat is a major cause of the decline of badger numbers. The expansion of human infrastructure into grassland areas results in the destruction of badger habitat.

In addition, development eradicates the badger’s prey species, meaning the area can no longer support a badger population.

The presence of American badgers can be beneficial to man as the species acts as a natural population controller for rodents and snakes.

Although the American badger is a tough, powerful opponent, it does not sit at the top of the grassland food chain. The species is occasionally targeted by larger predators such as bobcats, coyotes, bears and eagles.

Humans trap badgers for their fur, which is used for making shaving brushes and paint brushes.