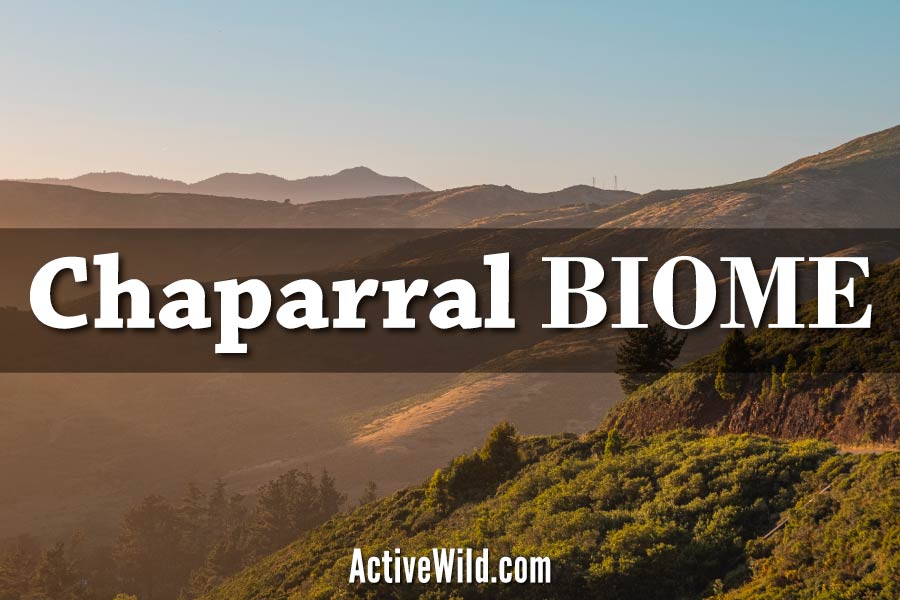 The chaparral biome facts, pictures and in-depth information. Find out what the chaparral is, where it’s found, and the animals and plants that call it home… 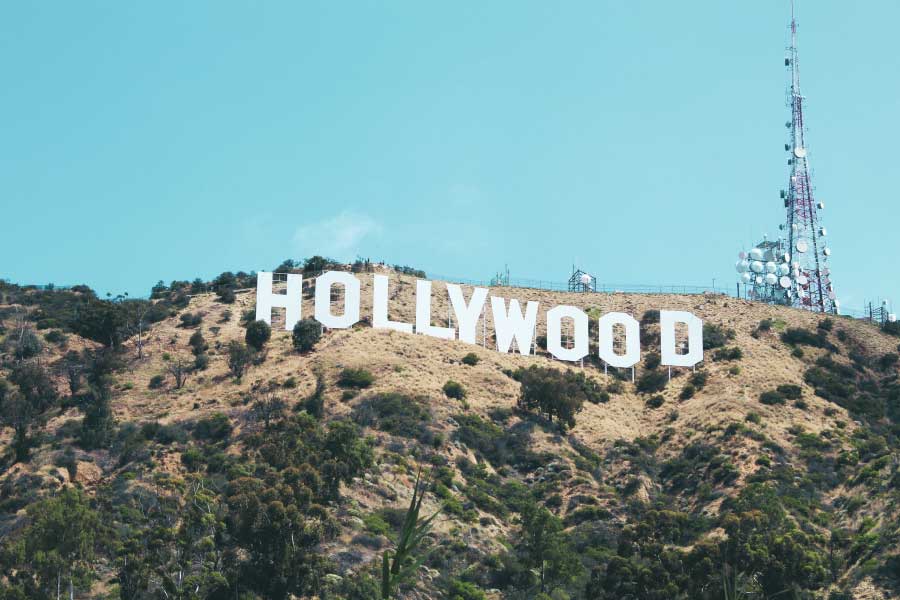 The Hollywood Hills can be seen in the background of countless photos of gaudy mansions, rich celebrities and fast cars. In the fast-paced world of fashion and showbusiness, they offer a glimpse of a much older and slower story, a story buried just beneath the bricks and concrete of Los Angeles. The story of the chaparral.

Chaparral is a type of woodland characterized by a combination of dry soil, warm weather, and short, hardy shrubs. The chaparral biome is dominated by short woody plants, rather than grasses (as in the grassland biome) or tall trees (as in forest biomes).

The chaparral is unique to the Pacific coast of North America. It is found from southern Oregon down through the coastal mountains of California and into northern Mexico. It is particularly associated with southern California. Chaparral forms the backdrop for countless movies about the Old West.

What Does Chaparral Mean?

The name “chaparral” comes from “chaparro”, the Spanish word for the California scrub oak tree (Quercus berberidifolia). Scrub oaks are short, drought-tolerant members of the oak family, and one of the most common plants in the chaparral community.

Chaparral woodlands often grow on hillsides such as the Hollywood Hills, or the rolling Marin Headlands outside San Francisco. It occurs in these locations because the coastal areas of California have both the necessary climatic conditions, and the rugged terrain (caused by the tectonic action along the San Andreas fault) required by chaparral to form.

Hilly terrain has one big advantage for the formation of chaparral: it doesn’t hold onto water. The slopes allow rainwater to drain away quickly, keeping the soil dry and preventing large trees from taking over.

The effect is compounded by the coarse, rocky soil of the chaparral, which lets water flow easily away from the surface. In those areas in which water can collect, chaparral is often replaced by oak forests, which have similar temperature requirements but which thrive in wetter conditions.

Chaparral is North America’s equivalent of the Mediterranean woodland. Like the scrubby hills of Italy and Spain, it experiences a mild climate: warm all year round, with dry heat in the summers and moderately increased rainfall in the winter.

Aside from the North American chaparral and the Mediterranean itself, the same Mediterranean climate is found in South Africa, southwestern Australia, and a short stretch of the Pacific coast of Chile.

Each of these areas has its own equivalent of the chaparral, a hot and scrubby woodland with drought-tolerant plants. But only in North America does it have the name “chaparral”.

Winter temperatures in the chaparral rarely get below freezing: they usually hover around 50°F, with a dramatic difference in nighttime and daytime temperatures. This is also the time of year when chaparral ecosystems get most of their rainfall.

During the summer, chaparral is much warmer, often well above 90°F and occasionally reaching into the triple digits. But here, too, nighttime and daytime temperatures can be very different. Overnight frosts, though uncommon, can occur even in the baking months of summer.

Chaparral woodland receives between 10 and 17 inches of rainfall a year: enough to keep the more tenacious shrubs alive but far too little to let a forest grow. By comparison, the heavily populated areas of the eastern United States see between 30 and 60 inches.

Mediterranean climates are always found near the coast. That’s because water maintains an extremely stable temperature – it has what’s known as a high “specific heat,” which means it can absorb a large amount of energy before it gets significantly hotter. It’s this that helps maintain the relatively mild temperatures characteristic of chaparral.

Fire is a key player in the chaparral ecosystem. Before humans came along, the chaparral probably burned once every 30-50 years, and many chaparral plants have become so well-adapted to fire that they actually depend on it for their reproduction.

Some plants, for example, have fire-activated seeds that lie dormant until the intense heat triggers them to germinate. That gives the seed two advantages: first, its potential competitors have been burned away; and second, recently-burned areas are unlikely to contain enough fuel for another fire, meaning the young plant will be relatively safe from fire during the vulnerable period of early growth.

As we saw earlier, the name “chaparral” comes from the Spanish word for scrub oak, and oaks are one of the main species found here.

It can seem a little strange – we usually think of oaks as tall, powerfully-built trees with a wide spread of branches. But some species grow in a more gnarled, brambly shape. They still have the broad, lobed leaves typical of oaks, and they produce the unmistakable fruit we call an acorn.

Sage scrubland is often found adjacent to chaparral, slightly downhill and to the south. Sage plants are also found in chaparral. They produce chemicals with an extremely bitter taste. This not only discourages animals from eating them. But also produce a beautiful earthy fragrance after rain – it’s one of the best things to experience in the chaparral.

Chaparral plants usually have wide and shallow root systems. This allows the plants to soak up as much rainfall as possible before it flows downhill or disappears into the rocky soil.

As is the case with nearly every biome on Earth, the foundation of the chaparral animal community is its insects.

Chaparral plants feed the caterpillars of silkmoths and monarch butterflies, as well as a diverse community of ants, beetles, and orthopterans (crickets and grasshoppers).

The chaparral monkey grasshopper (Morsea californica) is a unique orthopteran native to chaparral: its thin body and dull brown color let it blend right into the twigs of a scrub oak or the brittle soil underneath.

All those insects in turn become food for birds like the California thrasher and Bell’s sparrow, as well as a distinctive community of lizards.

Other birds feed directly on the plants of the chaparral: the California scrub jay, for example, is a clever omnivore with a taste for acorns.

Chaparral also provides a home for predatory birds such as the red-tailed hawk. However, hunting from the air is a challenge due to the dense tangles of vegetation, so other hunters stay on the ground, snatching their prey from rocks and branches. The roadrunner is a large, scruffy-looking chaparral bird with taste for lizard.

Most chaparral mammals are either rodents or lagomorphs (rabbits and hares). These small mammals make their home in and under the shrubs.

Larger mammals are less common, the exceptions being mule deer and coyotes. What they have in common is flexibility: coyotes, in particular, will eat just about anything and can be quite happy in a wide range of climates. The frequent chaparral droughts are no problem for them.

Another large mammal found in the chaparral is the mountain lion Puma concolor (also known as the puma or cougar).

These adaptable cats are stealthy and rarely seen by humans, but researchers have documented a sizable population of some 4,000-6,000 mountain lions in California.

Mountain lions are powerful and adaptable predators: although their main prey animal is the black-tailed mule deer, they can easily take smaller animals like rabbits, turkeys, and coyotes.

Chaparral areas can be attractive to the widespread and highly invasive primate Homo sapiens. Humans enjoy the mild weather, and thanks to a unique adaptation called “plumbing” they are relatively drought-proof!

Large areas of chaparral are found in the intermediate zone between coastal cities and relatively uninhabitable mountains and deserts.

As a result, suburban development threatens chaparral in many parts of California. The Los Padres National Forest, for example, is a large patch of mixed forest and woodland with some of southern California’s oldest chaparral.

The forest itself is federally protected, but much of the nearby chaparral is threatened by suburban sprawl from the city of Santa Barbara. A similar situation exists in Los Angeles, San Diego, and the San Francisco Bay Area.

Another threat to chaparral is wild pigs. Pigs aren’t native to North America; they’re the descendants of animals brought by Spanish explorers.

These invasive mammals reproduce quickly, eat everything in sight, and are too big for coyotes to take down. Mountain lions do prey on the pigs, but a large wild pig can be a formidable opponent even for these fearsome felids.

Managing the pig population is a big challenge for California. Fortunately, pigs are quite tasty and human hunters are happy to help cull the population.

As a result of global climate change, temperatures have gone up and rainfall has gone down throughout the chaparral area.

This has the effect of weakening the plant community, since even drought-tolerant chaparral plants will die in a prolonged drought.

While areas either further north or further uphill may become suitable for chaparral in the new, hotter climate, the plants cannot always spread to those areas fast enough to keep up with the pace of climate change.

The drier climate also leads to larger and more frequent wildfires. When wildfires occur in close succession, there isn’t enough time for the ecosystem to recover before the next burn, and chaparral can’t survive.

In addition, dead plants can’t hold the soil in place, so widespread fires cause soil erosion that makes it harder for plants to re-establish themselves in the aftermath of a fire.

Discover more about biomes on the following pages on Active Wild: