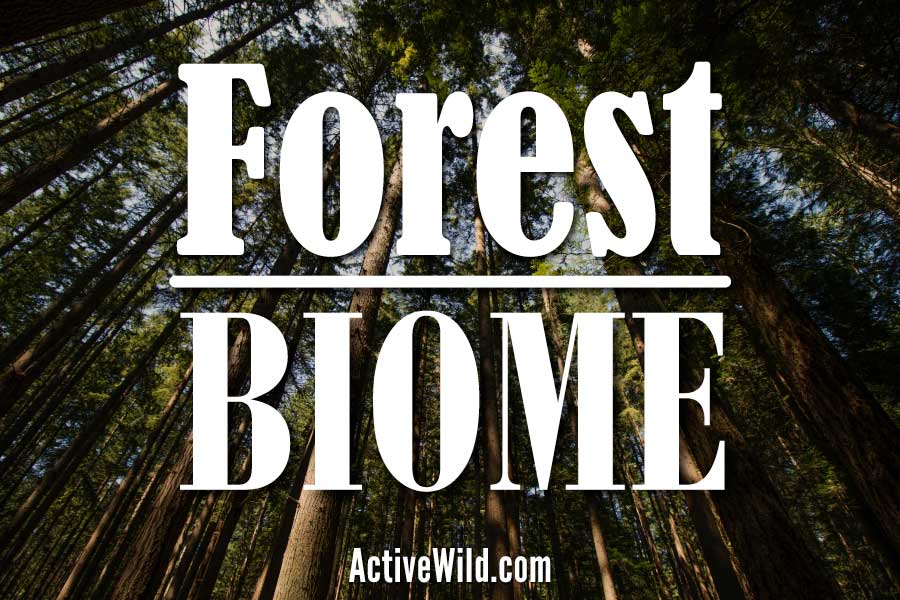 The world’s forests are home to a staggering number of plants and animals. Forests also perform many important ecological functions, including the production of much of the oxygen we breathe.

Explore Other Biomes On These Pages:

What is the Forest Biome?

The forest biome encompasses any habitat on land that is dominated by trees, and the characteristic communities of plants, animals, and other organisms that inhabit these regions. The three major types of forest are temperate, tropical, and boreal forest. Each occurs at a different latitude (distance from the Equator) and hence has a different climate and supports a different range of species. Today, forests cover around 4.06 billion hectares, or 31% of Earth’s total land surface.

Why Are Forests Important? 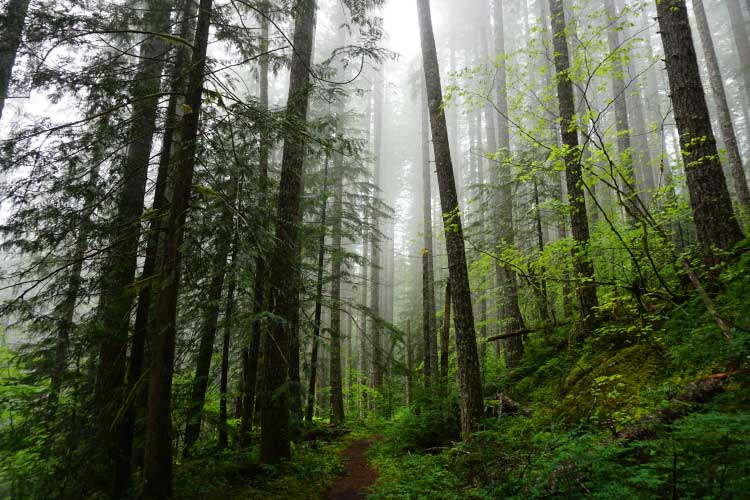 Forests are vitally important for life on Earth. They are among the most biodiverse of all land habitats and are home to around 80% of all land species. Tropical rainforests alone are home to an estimated 50% of all species on Earth.

From a human perspective, forests provide us with food and many of the raw materials we use in building, medicine and in many other industries. 1.6 billion people worldwide depend on forests for their livelihoods.

Forests also provide us with spaces for recreation; not only are forests important biologically and economically, they’re also nice places to visit!

The first forests appeared around 380 million years ago, during the Devonian Period.

These ancient forests were quite different from the forests we know today. With flowering plants yet to evolve, and seed-producing plants only appearing towards the end of the period, Devonian forests consisted of giant ferns, horsetails, and mosses. (These plants reproduce with spores rather than seeds.) Archaeopteris, one of the first-known trees, is thought to have been the dominant plant in the forests of the time.

As the millennia passed the composition of forests began to change. During the Triassic Period, it was gymnosperms, including conifers and gnetophytes, that made up Earth’s forests. These are the forests through which the first dinosaurs would have wandered.

Conifers remained the dominant plants in the Jurassic Period. The warm, moist climate of the time allowed forests to become widespread.

During the Cretaceous Period angiosperms (flowering plants), including hardwood trees, began to appear, although it was still the conifers that made up the majority of the world’s forests.

The Amazon Rainforest–the biggest and most diverse of today’s rainforests–appeared around 55 million years ago, a mere 10 million years after the extinction of the dinosaurs.

Today angiosperms are the dominant trees in forests in tropical and most temperate regions. In today’s boreal forests, however, it is still conifers that dominate.

The destruction or conversion of forested areas is known as deforestation.

Forests are destroyed for a number of reasons, including: slash and burn agriculture (in which areas of forest are cleared then set alight), timber production, the creation of agricultural land, the expansion of human settlements, and the building of mines, roads, and other infrastructure.

In the three decades between 1990 and 2020, around 178 million hectares of forest have been lost. Over 60% of the world’s original rainforests have been destroyed by human activity.

Climate change is also having a negative effect on the world’s forests by increasing the frequency of forest fires, droughts, and other extreme weather events.

Forests vary greatly in their diversity, but their general structure is remarkably similar. Forests can usually be broken down into four distinct structural layers. From lowest to highest these are the forest floor, understory, canopy and emergent layer.

You can find out more about forest layers on this page: Rainforest Layers

What are the Different Types of Forest?

Forests can be broadly grouped into three categories:

Tropical forests are closed-canopy forests that are located near to the equator. They are found in South America, Africa, Asia and Australia.

In closed-canopy forests there are no breaks in the canopy. This means that very little light is able to reach the understory and forest floor layers. These layers are therefore very dark.

Due to their location near the Equator, tropical forests remain warm all year round, with little seasonal variation. Their average daily temperatures range from 20°C to 35°C.

Tropical forests are broadly categorised by differences in the amount of rainfall they receive throughout the year.

Tropical forests can be further categorised based on characteristics such as elevation, soil type, crown shape, leaf structure, and canopy height.

45% of the world’s forests are tropical forests. A further 11% of all forests grow in subtropical regions.

Rainforests are home to enormous, broadleaved hardwood trees. A feature of many tropical rainforest trees are their buttress roots, which spread out from the trunk above the ground to provide additional support for the tall tree above.

Temperate forests grow in temperate regions, which are located in the “middle latitudes” between the tropics and polar regions of both the Northern and Southern Hemispheres.

Temperate forests cover large parts of North America and Europe. They are also found in New Zealand and Tasmania, Australia.

Unlike tropical forests, Temperate forests experience distinct seasons. They usually have a fairly long growing season and experience a good amount of rainfall per year, although this may be concentrated in particular seasons.

Around 16% of the world’s forests are temperate forests.

The forest floor of temperate forests is home to a vast number of mosses, lichens, ferns, wildflowers, and other small plants.

Deciduous trees shed their leaves in the winter.

Boreal forests, also known as taiga forests, grow in a wide band across the northerly regions of North America and Europe. Boreal forests grow south of the Arctic tundra and north of temperate deciduous forests.

As a result of snowmelt combined with relatively low temperatures, there is a large amount of water available during the growing season. This results in a high amount of plant growth over a short amount of time in the summer.

Boreal forests make up around 27% of all forests.

Biodiversity in boreal forests is relatively low compared to other forest types. The boreal forest is dominated by a few species of conifers. Other than these, few plants are able to become fully established as the soil here is low in nutrients and is often frozen.

Mosses, lichens, and mushrooms cover the forest floor as these plants can survive with low levels of sunlight and water.

Explore Other Biomes On These Pages: