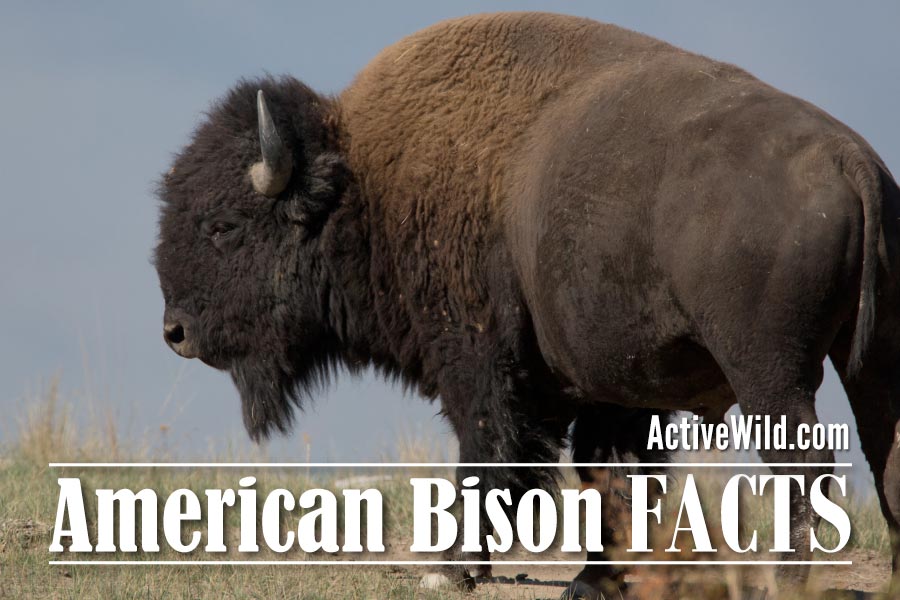 North America has plenty of famous mammals: the towering moose, the nimble flying squirrel, the blisteringly fast pronghorn–but the most iconic by far is the American bison (scientific name: Bison bison). This huge mammal–the largest North American land animal by weight– is the National Mammal of the United States.

It is, however, a close relative of the European bison (Bison bonasus); the two species are the only living species of genus Bison.

That’s why scientists prefer the name “American bison,” which places the animal on its proper branch of the mammalian family tree.

That doesn’t mean “buffalo” is wrong; it’s a common name for the American bison in outdoor circles, and is recognized in most dictionaries. It’s a little bit like calling a mallard a “greenhead.” Not wrong, but definitely informal.

It’s easy to distinguish bison from “true” buffalo at a glance: bison are much shaggier than buffalo and their horns are relatively small and situated near the middle of the head.

Buffalo horns, on the other hand, are huge and sit high up on the head (African buffalo horns, for example, run straight across the top of the animal’s head and meet in the middle).

Historically, bison herds could be found from Alaska to Mexico and from California to Virginia. The herds grew so large that some early explorers mistook them for rock formations.

As the United States expanded westward, the bison was hunted almost to extinction, not only for meat and hides but also as a starvation tactic: by eliminating the bison herds, American expansionists figured they could force the hostile Plains Indians into submission.

When Americans realized that their iconic large mammal was about to go extinct, preserves were established and regulations passed to protect their numbers.

The near-extinction of the bison was a major catalyst of the early environmental movement led by conservationists like John Muir and Theodore Roosevelt.

Today, according to the Nature Conservancy, there are around 350,000 wild bison living in the U.S. and Canada – less than 1% of their previous numbers. The species has the conservation status “Near Threatened”.

American bison are restricted to remote (and very cold) parts of Alaska and the Rocky Mountains, but their population is now stable and someday, if conservation efforts continue, the American bison may once again be a common sight throughout the country.

The American bison has a distinctive body that has been shaped, over thousands of generations, by extreme cold. It is exquisitely adapted to the harsh winters of its home range. The species is able to survive subzero temperatures and can find food even under heavy snow. In a blizzard, a herd will huddle together to conserve body warmth.

Between their cold tolerance and their sheer size (which makes them intimidating to predators) it’s easy to imagine how the bison herds could have grown so large!

How Big Is An American Bison?

At over 2,000 pounds (970 kg), the bison is the largest land animal in North America. The next largest, the moose, comes to around 1,500 lb (680 kg)… still impressive by human standards, but nowhere near the mass of a male bison.

Overall bison have an odd, front-heavy look. Bison are 5-6 feet at the shoulder, but unlike a horse or cow, a bison’s shoulder isn’t the tallest point on its body. Its massive hump can rise a foot or more above the shoulder joint, bison are often much taller than 6 feet.

Unlike a camel’s hump, that of a bison is made from pure muscle. Camels have fatty humps that store energy so the animal can travel long distances between meals. The bison’s hump, on the other hand, is a huge bundle of muscle fibers that support the animal’s oversized head.

The difference between a camel’s hump and a bison’s is conspicuous when you compare the skeletons. Because it’s just a big fat deposit, the camel hump doesn’t need to attach to the skeleton. The bison hump, on the other hand, needs strong bony muscle attachments.

To support the muscles, the bones of a bison’s neck have long vertical projections called “spinous processes” – it’s the same structure that you can feel as little bony knobs on the back of a person’s neck.

In humans those processes are just inch-high bumps, but in a bison they can be as long as your arm!

Why does a bison need such enormous neck muscles? It’s pretty obvious when you look at them: their heads are gigantic. Much of that bulk is made up of shaggy hair, of course, but even so a bison’s head is extraordinarily heavy and needs powerful muscles to move around.

In cold weather, bison forage for food by using their huge heads to sweep away deep snow.

Alongside its big hump, the American bison’s iconic profile comes from the unusual distribution of hair on its body. The bison has long, shaggy hair on its front legs, neck, head, and shoulders, but only very short hair on its lower body and back legs.

As with the bison’s huge head and strong neck muscles, the shaggy front coat is an adaptation for living in a cold climate. It allows the animal to plow through snow without losing too much body heat.

Overall, bison hair is extremely thick. Measured in fibers per square inch, bison can have 3-6 times as much hair as cattle – yet another adaptation to extreme cold.

Despite their dense body hair, bison actually have less hair than cattle around the eyes. That’s to protect the eyes from water than might collect in the hair and freeze – sadly, a common occurrence for cows kept in cold places.

Both male and female bison have horns. And they are true horns rather than antlers: these permanent structures are made from bone and have a hard keratin sheath.

Antlers, on the other hand, are shed and re-grown each year, and are only made up of bone.

By constantly grazing on low vegetation, American bison prevent trees from taking over the prairie landscape and turning it into forest. They also churn the soil with their hooves, loosening and aerating it like a natural plow.

In that well-prepared soil bison leave their droppings–rich deposits of natural fertilizer filled with the undigested seeds of local plants. So a bison is a plow, a seeder, and a combine harvester – all in one.

An adult bison is a serious challenge for any would-be predator. Wolf packs have been known to hunt very young or very sick individuals, and some of the larger grizzly bears hunt them as well.

Even mountain lions, which have neither size nor cooperation on their side, have been reported to hunt bison on a few occasions. But attacks on adult bison, by any predator, are very rare.

When threatened, bison become dangerous. Their big heads and sharp horns are formidable weapons against even a large grizzly bear, and they are apt to charge at perceived threats, forcing predators to retreat or risk being bludgeoned to death.

On top of that, bison typically stick together in the face of threats – they don’t just break and run. So unless the predator is extremely patient and clever (or extremely lucky) they may end up facing multiple bison at once – 10,000+ pounds of angry muscle. No fun.

For the last few thousand years, the major predator of bison has been Homo sapiens. Humans have hunted bison since we first arrived in North America some 20,000 years ago. For some Native American groups on the Great Plains, the “buffalo hunt” was a critical source of food as well as a major spiritual practice.

American schoolchildren always learn that Native hunters “used every part of the buffalo.” That’s true, but as author Steven Rinella puts it in his book, American Buffalo: In Search of a Lost Icon, that doesn’t mean they used every part of every buffalo.

Today, far more humans are attacked by bison than the other way around. Attacks typically take place when visitors get too close to bison in places like Yellowstone National Park.

These big, impressive animals are a major draw for tourists, but they’re best appreciated from a respectful distance.