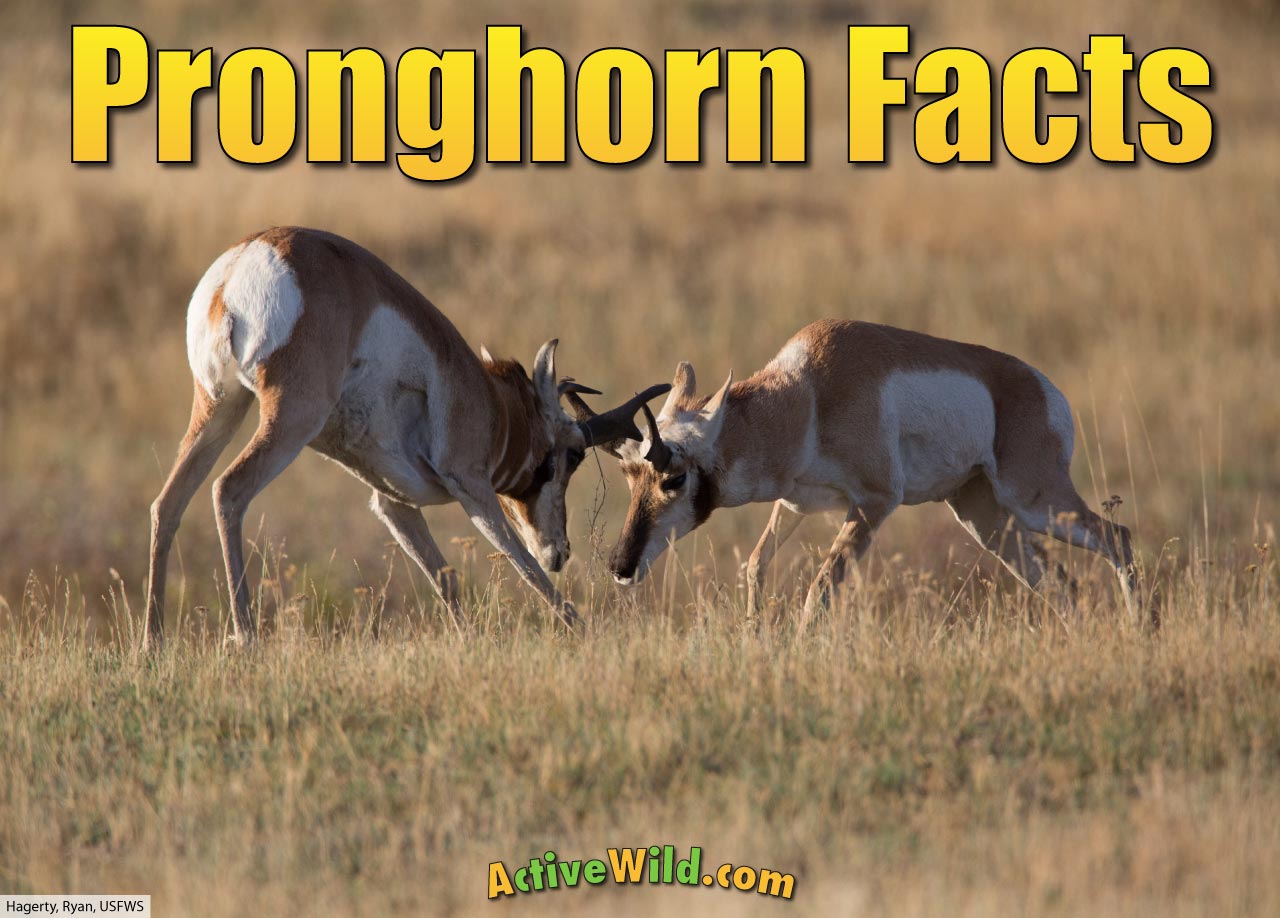 Pronghorn facts, pictures, video and information. Sometimes known as the ‘American antelope’, the pronghorn is in fact not an antelope at all; surprisingly, the species’ closest relative is the giraffe!

The pronghorn is the second fastest land animal in the world, and the fastest in North America. Scientists believe that the pronghorn’s great speed is due to the animal’s evolution alongside the now-extinct American cheetah.

Pronghorn Facts At A Glance

The pronghorn is a North American ungulate (hoofed mammal). Although it is known as the ‘American antelope’, it is only distantly related to the ‘true’ antelopes found in Africa and Eurasia.

The physical similarities between the pronghorn and antelopes can be explained by ‘parallel evolution’ – the process by which unrelated animals with similar lifestyles come to resemble one another.

Perhaps surprisingly, the animals to which the pronghorn is most closely related are the giraffe and the okapi. The pronghorn, giraffe and okapi are the only surviving members of the superfamily Giraffoidea. (A ‘superfamily’ is a group containing several closely-related animal families.)

Like the giraffe, and animals such as pigs, deer, antelopes and cattle, the pronghorn is a member of the order Artiodactyla. Members of this group are also known as the even-toed ungulates. This is because they stand on two toes of each foot.

(Odd-toad ungulates such as horses, rhinos and tapirs stand using just one toe of each foot.)

The pronghorn itself is the only living member of the family Antilocapridae. A number of other species in this family (including Osbornoceros and the dwarf pronghorns of genus Capromeryx) were once found in North America but are now extinct.

There are 5 recognized pronghorn subspecies:

Each subspecies is found in a different region. Some subspecies have their own conservation status: the Baja California pronghorn is Critically Endangered, and the Sonoran pronghorn is endangered.

You can see footage of wild pronghorns in the video below…

The pronghorn has a barrel-shaped body and long, slim legs. Like all members of the order Artiodactyla it has cloven (split) hooves, with each foot having two main weight-bearing ‘toes’.

The upperparts of the animal are reddish-brown to tan in color. The sides, underparts and rump are white. There are also white bands across the throat.

When alarmed, the pronghorn is able to erect the white fur on its rump, creating a highly visible warning sign that can be seen up to 2 miles away.

Males have additional black markings on the face and the sides of the neck.

The pronghorn’s coat is coarse in texture and very dense.

Both males and females have upright horns that are black in color, although those of the female are smaller, lack prongs, and are sometimes barely visible.

The pronghorn is named after the unique ‘pronged’ pattern of the male’s horns. Each horn has a backwards-facing hook and a forward-facing prong. The outer sheath of the horns is shed annually.

Pronghorns in the northern parts of the species’ range tend to be both larger in size and darker in color than their southern counterparts.

Range – Where Does The Pronghorn Live?

The Pronghorn is endemic to (i.e. only found in) North America. It is found in the United States, Canada and Mexico. The species’ range covers the southern Canadian Prairies, western United States and northern Mexico. The distribution is patchy.

States In Which The Pronghorn Is Found

The pronghorn usually inhabits open terrain with good visibility in all directions. Typical habitats include grasslands, sagebrush plains and deserts. The pronghorn is found from sea level up to elevations of around 3,350 m (11,000 ft.).

The pronghorn may be active either during the day or at night. The species is most active just before sunrise and sunset.

The pronghorn forms large, loose herds consisting of up to 1,000 individuals during the winter. In spring, the animals disperse: mature males claim territories, young males form bachelor herds and females, together with their young, form their own, smaller groups.

Some pronghorn populations undertake seasonal migrations. The distance covered by these herds can exceed 260 km (160 mi), making it the longest land migration of any animal in the contiguous United States.

Scent plays an important role in pronghorn communication. Secretions from the animal’s scent glands, and scent contained in urine and droppings, are used to mark territories and to attract mates.

Both sexes have scent glands on the rump and in between the toes, while males also have them behind the ears and on the back.

Vocalizations, including snorts, wheezes, whines and roars, are also used by the pronghorns to communicate with each other. These may be used during courtship, aggressive encounters, and to help females and their fawns locate each other.

The pronghorn is famous for its speed, being the fastest land mammal in the Americas and the second fastest animal in the world; only to the cheetah is faster.

The pronghorn can reach a speed of 98 km/h (61 mph) in short bursts. Unlike the cheetah it is also able to sustain speeds of up to 70 km/h (43 mph) for several kilometers at a time.

The pronghorn has a number of adaptations for running fast. These include a large (compared to body size) windpipe, heart and lungs, which together enable large amounts of oxygen to be taken in while running.

In addition, the pronghorn has light bones, and cushioning between its toes to absorb shocks when running at high speed.

It is thought that the pronghorn’s incredible running ability is the result of a ‘prehistoric arms race’ between it and the now-extinct, but just as speedy, American cheetah. 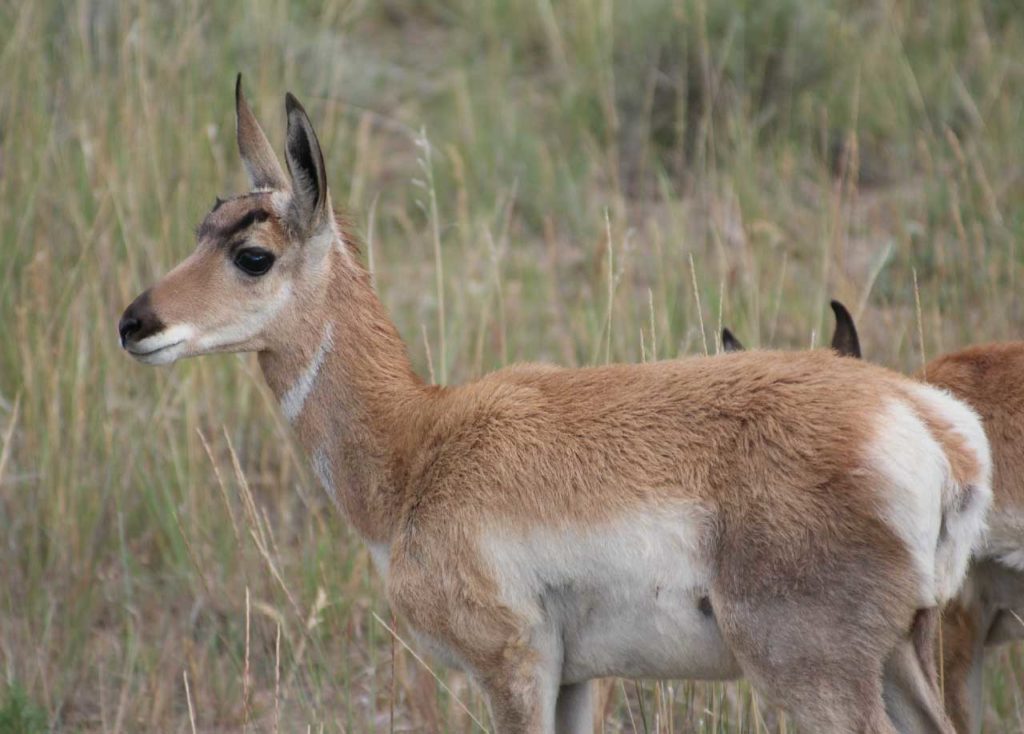 Depending on the conditions, adult males may adopt one of two main strategies when it comes to mating. The first is to establish and defend a desirable territory in order to attract females; the second is to directly defend a harem (group) of females.

A male defending a territory or harem will first try to intimidate a rival male by staring, raising its mane and rump hair and making warning vocalizations (snorts and wheezes). It will then approach the intruder, and the two may then walk side by side with their heads held low.

Confrontations such as these usually result in the less-dominant animal fleeing, being chased by the victor.

However, if neither animal backs down, a fight may ensue (although this is relatively rare). 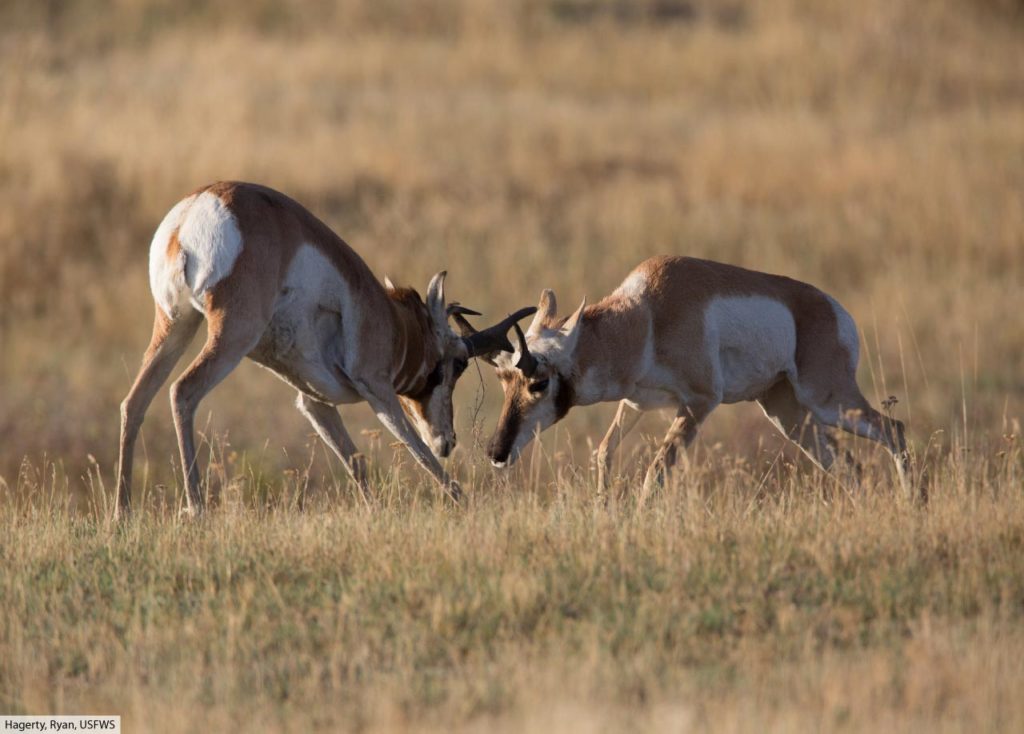 Fighting consists of horn thrusts, and the locking of horns and twisting of heads in an attempt to knock the adversary off balance. Fights tend to last only a few minutes, but serious injuries are common.

During courtship, the male makes a high-pitched whine and waves his head from side to side to release pheromones as he approaches the female.

Gestation (pregnancy) lasts 7 to 8 months. Typically, females give birth to one fawn in their first year of breeding, and twins in subsequent years. Newly born fawns weigh around 3 kg (6.6 lb.).

The young are able to stand within minutes of being born, but tend to stay hidden in vegetation for the first few weeks of their lives. The young are weaned at around 4 to 5 months and become independent after 12 to 18 months.

Pronghorn lifespan is 7 to 10 years.

What Do Pronghorns Eat?

The pronghorn is herbivorous. It browses or grazes on a wide variety of plants, including: forbs (herbaceous flowering plants), shrubs (including sagebrush and rabbitbrush), grasses and cacti.

Although the pronghorn feeds on several plant species that are toxic to cattle and sheep, its diet does include plants that are also eaten by livestock.

The pronghorn’s principal predators include wolves, pumas, bobcats and coyotes. In addition, pronghorn fawns are vulnerable to predation by golden eagles.

The pronghorn’s main defensive strategy is fleeing at high speed from the threat. In some situations it will defend itself with its horns and feet.

Is The Pronghorn Endangered?

The pronghorn is rated ‘Least Concern’ by the IUCN.

The species is widely distributed and fairly common in most parts of its range. The size of the total population is estimated to be around 1 million individuals.

There are no major threats affecting the species as a whole. Despite this, some populations and subspecies are threatened.

The Sonoran pronghorn subspecies is rated Endangered; the Baja California pronghorn is Critically Endangered. Threats to these isolated populations include habitat loss, habitat fragmentation and drought.