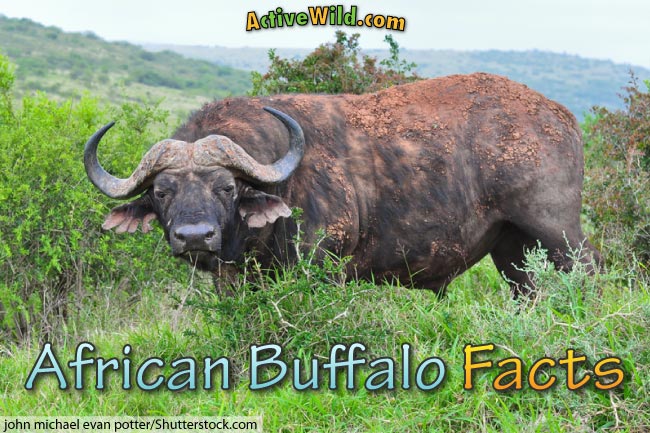 African buffalo facts, pictures and video. Large, powerful, and equipped with fearsome horns; the African buffalo is an imposing sight and one of Africa’s most dangerous animals.

Predators such as lions have found to their cost that if you mess with one African buffalo, you mess with the whole herd! On this page, we’re going to meet this amazing African mammal …

African Buffalo Facts At A Glance 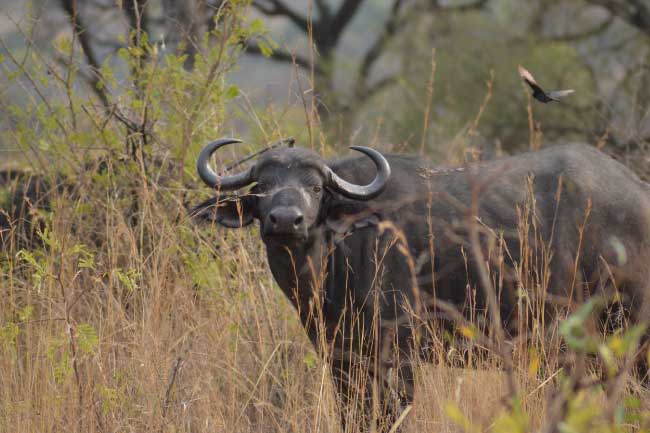 The African buffalo is a heavily-built animal with stocky limbs, a short neck and a large head that is carried low (the top of the head is usually below shoulder height).

Both males and females have large, curved horns. Those of the male are up to 20% longer, and are fused (joined) at the base, forming a bony shield called a ‘boss‘ over the head.

The color of the African buffalo varies depending on the subspecies: the savanna-type subspecies (see below) tend to be black or dark brown in color, while the forest-type subspecies is typically red.

The hair of the females and calves of all subspecies is usually more reddish in color than that of the adult males.

You can see some excellent close-up footage of the African buffalo in the video below:

Four subspecies (types) of African buffalo are generally recognised. After reading the section below, try to find where they live on the map …

The Cape buffalo (Syncerus caffer caffer) is the typical subspecies, and the largest of the four subspecies. It is also known as the southern savanna buffalo.

The Cape buffalo is found in southern and south eastern Africa. Countries in which it is present include South Africa, Kenya and Botswana.

The West African savanna buffalo is found in central and West African countries including Sudan, Ghana, Benin and Cameroon.

The African forest buffalo (S. c. nanus) is the smallest and the only one of the four subspecies to occur mainly in rainforest. It lives in the tropical rainforests of western and central Africa and is also known as the Congo buffalo.

The horns of the African forest buffalo are both smaller and straighter than those of the savanna subspecies. They are not usually joined at the base.

The African buffalo is a member of a group of animals called bovines. Bovines are large, hoofed animals. Other bovines include domestic cattle and bison.

Bovines are members of the Bovinae animal subfamily (which is part of the animal family Bovidae, which also includes animals such as antelopes, sheep and goats).

The African buffalo is the largest bovine species in Africa and numbers among the ‘Big Five‘ game animals.

The ‘Big Five’ were the five animals that big game hunters used to target while in Africa. Together with the African buffalo, the big five included the lion, leopard, rhinoceros and elephant.

Today, visitors to Africa hope only to see the big five rather than to shoot them!

The species prefers habitats that have an abundance of grass, water and dense cover, and tends to stay within 20km (12mi) of a water source. The African buffalo can be found at elevations as high as 4,000m (13,000ft) above sea level.

African buffalos are not generally found in the more arid areas of eastern and southwestern Africa.

The savanna-type subspecies live in herds that can consist of several hundred individuals. Forest buffalo herds are much smaller in comparison, containing up to 20 individuals.

Related females and their young form the core of the herd. A dominant bull protects the herd from potential competitors. A strict dominance hierarchy exists within the herd. High ranking males and females, and subordinate males, form ‘sub herds’ around the main herd.

During the dry season, males split from the main herd, forming bachelor groups. Come the mating season, the males rejoin the main herd, and remain to protect the herd’s calves.

A type of ‘voting behavior’ has been observed in African buffalo herds: when it’s time to move, individual members of the herd demonstrate using body language which direction they want to go. The herd then moves in the direction chosen by the majority.

Adult bulls in a herd determine dominance by sparring, with larger and older bulls typically claiming the top position. Adult bulls and calves also spar in play. Violent fights are very rare and tend to be over quickly if they do occur.

The African buffalo usually mates during the wet season, though breeding may occur any time of year if the conditions are good.

During the mating season, the younger bulls leave their bachelor groups to rejoin the main herd. The dominant males stay close to and guard the females that are in estrus (ready to mate).

Gestation (pregnancy) lasts nearly a year, after which the cow gives birth to a single calf (twins are rare).

For the first two weeks of its life, the calf is hidden in dense vegetation. Older calves join the main herd and are kept at the center for protection.

The calves are weaned at around 6 months of age, though the mother-calf relationship may last up to 3 years.

What Do African Buffalos Eat?

The African buffalo is a grazer. It prefers to eat grass and herbs but will also feed on other plant matter, such shrubs and trees, when its preferred food is not available.

The African buffalo doesn’t make for an easy meal: the entire herd tends to stick together when threatened by predators, aggressively defending its members and attempting to rescue any captured individuals.

It can take an entire pride of lions to take down an adult buffalo, while crocodiles sometimes succeed in preying on old, solitary individuals. Newborn calves may be occasionally preyed on by cheetahs, leopards and spotted hyenas.

The Most Dangerous Animal In Africa?

The African buffalo is considered one of Africa’s most dangerous animals, and is responsible for over 200 fatal attacks on humans every year. Due to its fierce, unpredictable nature, the African buffalo has never been domesticated.

Is The African Buffalo Endangered?

The African buffalo is rated ‘Least Concern‘ by the IUCN.

The species is widespread, and the estimated size of the global population ranges between 500,000 and 1,000,000 individuals, with the majority occurring in protected areas.

Some African buffalo populations, however, have been declining. The main causes for local declines are: