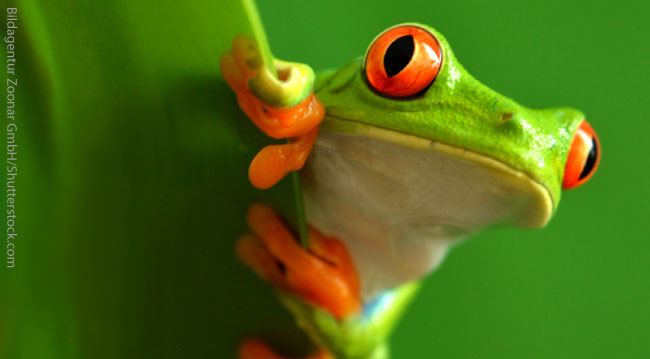 Red eyed tree frogs seem to be everywhere: from computer screen savers to advertisements – these little frogs have hit the big time! Their green colouring and big red eyes are no accidents; the red eyed tree frog has evolved to fit a particular niche in the rainforest ecosystem.

Like many creatures, there is more to the Red eyed tree frog than meets the eye. One survival trick in particular is amazing! Read on to find out more about this, and other awesome red eyed tree frog facts …

The scientific name for a red eyed tree frog is Agalychnis callidryas. The name was inspired by the frog’s good looks: it means ‘beautiful tree nymph’.

Red eyed tree frogs are in the Hylidae family of frogs. This family is known as the ‘tree frogs’.

True to their name, Red eyed tree frogs are ‘arboreal’, which means that much of their lives is spent in trees.

However, not all Hylids (members of the Hylidae family) actually live in trees.

Red eyed tree frogs have bright, leaf-green bodies, with yellow and blue stripes running down their sides. Their characteristic big, red, forward-facing eyes dominate their heads. The insides of their legs and undersides are orange.

Red eyed tree frogs have sticky pads on the ends of their fingers and toes, which are used to grip onto twigs and branches. The pads secrete a sticky mucus that helps holds the frog onto smooth surfaces.

Watch the frogs in action in the video below:

Red eyed tree frogs are nocturnal, which means they are active at night. During the day, red eyed tree frogs curl up so that their bright colours are hidden, and they look completely green from the outside. This protects them from predators.

Why The Red Eyes?

During the day, red eyed tree frogs hide among the leaves. However, if they are disturbed, they open their eyes and display their bright colours. Potential predators may be momentarily disturbed, confused, or frightened by the sudden appearance of these bright colours, giving the frog time to hop away. This is known as ‘startle colouration’.

This colouring is the adult red eyed tree frog’s only defensive strategy; unlike other rainforest frogs (such as the poison dart frog), they are not poisonous.

Red eyed tree frogs are found throughout Central America, and also in Mexico.

Red eyed tree frogs are insectivores, which means they eat insects. They catch crickets, flies, moths and other insects with their sticky tongue, and swallow their prey whole.

During the mating season, male red eyed tree frogs wrestle with one another for the right to mate. They have also been known to shake branches in order to deter other males and to attract females.

During mating, the male climbs on top of the female, grabbing her with his arms under her armpits. He fertilises the eggs as they are laid.

Red eyed tree frogs lay clutches of around 40 eggs. These are deposited on leaves that overhang ponds, puddles or streams. The eggs hatch after 6 to 7 days, and the tadpoles drop down into the water.

One amazing survival strategy that the eggs / tadpoles have up their sleeves is the ability to hatch early. This is known as ‘phenotypic plasticity’. If a change in the environment is detected that signifies a threat (e.g. a predator approaching), the tadpoles drop from the eggs and out of harm’s way. This increases the likelihood of survival

The tadpoles can survive 20 hours out of water, so even if the eggs were not laid directly over water, there is a chance that rain may carry the tadpoles to safety.

Red eyed tree frog tadpoles remain in the water until they change into frogs. This can take between 3 weeks to several months.

The lifespan of a red eyed tree frog is around 5 years.

We hope that you have enjoyed reading about this rainforest amphibian. You can find out about more amazing rainforest species here.