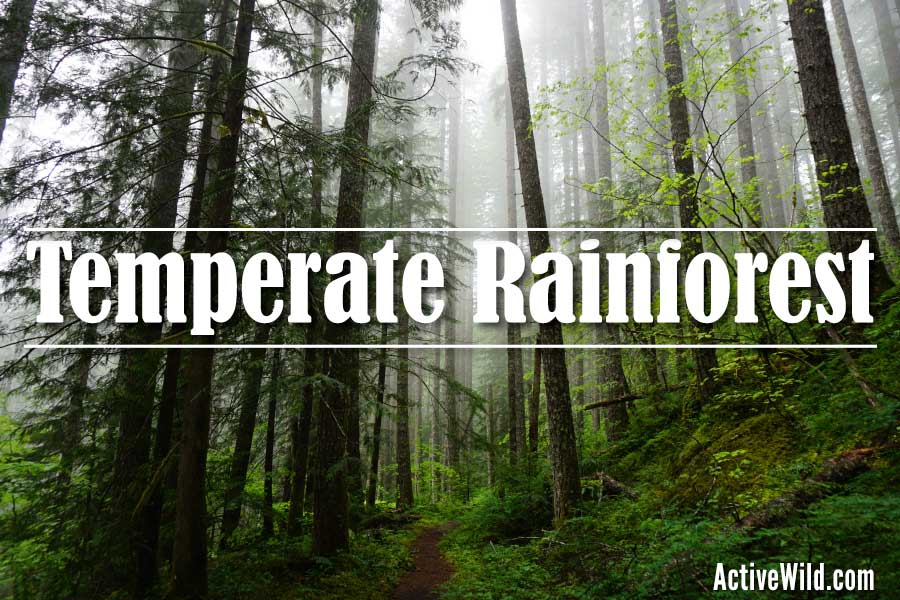 The temperate rainforest biome encompasses rainforests found between the tropics and the polar regions of both the northern and southern hemispheres.

Although not as biodiverse as tropical rainforests, temperate rainforests are nevertheless highly-valuable habitats for countless animal and plant species, many of which are found nowhere else on Earth.

On this page you’ll find out about the temperate rainforest biome, and the animals and plants that call these forests home…

Other Relevant Pages on Active Wild

What Is A Temperate Rainforest?

A temperate rainforest is a forest that receives a high amount of rainfall and is located in a temperate region (i.e., between the tropics and the polar regions in both the north and south hemispheres).

When we think of rainforests, we visualize steamy, hot jungles with dense canopies of leaves, hanging vines, and large populations of monkeys, tree frogs and brightly-colored birds. This is a tropical rainforest. Tropical rainforests are located in the tropical zone around the Equator.

Temperate rainforests too are full of large trees and experience high rainfall, but unlike tropical forests are located in the temperate zones between the tropics and the polar regions. Here, temperatures are lower and there is a greater difference between the seasons.

Rainforests in these zones do not experience extreme cold or extreme heat and as a consequence, both the summers and the winters are mild.

Temperate forests have existed since the start of the Cenozoic Era (65 million years ago), when the world’s climate cooled dramatically and tropical conditions became restricted to areas around the equator.

Although temperate rainforest is found on all the continents, it covers a total area of only 30 to 40 million hectares worldwide, making it the smallest of the earth’s forest biomes.

Although less biodiverse than tropical rainforests, temperate rainforests are nevertheless important habitats for countless animal and plant species, many of which are found nowhere else on Earth.

Where Are Temperate Rainforests Located?

Temperate rainforests are located within the temperate zones of both the northern and southern hemisphere, and are present to a greater or lesser extent on every continent. Today, their distribution is patchy and, in many areas, threatened by human activities.

The largest area of temperate rainforest is located in north-western North America. Known as the Pacific temperate rainforests ecoregion, this forested region hugs the Pacific coast from southern Alaska, through British Columbia in Canada, and southwards along the US Pacific northwest, as far as northern California; a distance of about 2,500 miles (4000 km).

South America is home to the second largest continuous strip of coastal temperate rainforest: the Valdivian temperate forests. This tract stretches along the western coast of Chile, from about 36°S, southwards to Tierra del Fuego in southern Argentina.

In both the Pacific Coast and Valdivian rainforests, moisture-laden clouds roll in from the Pacific and drop their rain before striking the west-facing coastal mountain ranges. This, along with regular fog, provides the high precipitation that characterizes these rainforests.

Elsewhere in the southern hemisphere, temperate rainforests are found covering much of New Zealand, as well as Tasmania and the south eastern coastal area of Australia.

In the northern hemisphere, there are small, relict patches of temperate rainforest in Ireland, Norway, Iceland and the UK., but these are greatly diminished from their original extent.

There are also pockets of temperate rainforest in countries that border the Black Sea in eastern Europe, and on the Caspian Sea in the Middle East.

In Asia, temperate rainforest can be found in southern Japan and along the Korean peninsula, as well as in southern China and the Russian far east.

In the temperate latitudes there are many days of sunshine and the plants in these regions therefore have long growing seasons. Temperate rainforests support a huge biomass of plants and are characterized by the presence of many tall and long-lived trees.

Some of the tallest trees in the world are found in temperate rainforests; both Douglas firs and redwoods grow taller than 325 ft (100 m) in the coastal forests of North America, as do the Tasmanian mountain ash (Eucalyptus regnans) and cypresses in Chile.

Temperate rainforests in the northern hemisphere contain mostly conifers such as firs, spruces and cypresses.

The trees of the southern hemisphere temperate rainforests are more closely related to tropical species. They may be conifers such as podocarps, or broad-leaved trees such as the Tasmanian mountain ash.

Like their tropical cousins, temperate rainforests have four distinct layers.

The emergent layer includes the tops of the highest trees. This is the brightest and most exposed layer.

The leaves and branches of the majority of the forest’s trees form the canopy layer. The canopy is home to many birds, insects and arboreal (tree-dwelling) mammals.

Under the canopy is the understory layer; a dark, damp layer that is home to shrubs and young trees. The canopy blocks out sunlight from reaching the understory, therefore this layer is typically sparse, and home to plants that are adapted to living in shady conditions.

The fourth layer is the forest floor. This layer of the temperate rainforest is home to many different species of mosses, ferns, fungi and lichens, which coat the tree trunks, rocks and soil.

Epiphytes (plants that grow on other plants, but do not parasitize them) are common due to the high level of moisture within the forest.

Forest soils are typically rich in nutrients because of the seasonal decay of fallen leaves and other plant parts that occurs each autumn. This, along with the constant moist conditions, makes ideal conditions for seeds to germinate.

However, tree seedlings need sunlight in order to photosynthesize and grow, and in a temperate rainforest the canopy allows very little sunlight through. It is really only where a mature tree falls and creates a gap in the canopy that new seedlings have a chance of growing.

Fallen trees in a temperate rainforest are known as “nurse logs” because they provide shelter, nutrients and in some cases a platform on which young trees can grow.

Although not as biodiverse as tropical rainforests, temperate rainforests are home to a rich variety of living species.

Because temperate rainforests are isolated from each other and occur in such restricted locations on all the continents, their fauna and flora do not share much in common. It is more informative to consider the plant and animal communities of each of the major temperate rainforests individually.

The coastal rainforest that extends southwards from Alaska is influenced by its proximity to the Pacific Ocean, which keeps the air moist and the temperatures mild. Precipitation occurs all year round in the northern regions, and includes a lot of moisture derived from fog.

Further south, the climate changes to mild, wet winters and cool, dry summers. The main tree species include Douglas firs, pines, redwoods, cedars and cypresses, many of which grow to over 100 ft. tall.

The redwoods of California are famous for being some of the largest and oldest trees alive today.

The understory consists species that can tolerate shady conditions, such as maple, dogwood, blackberries and salmonberries.

The forest floor is covered with ferns and mosses, while epiphytes grow on trees and lichens adorn branches.

The rainforest sustains a large and diverse community of insects, as well as small mammals such as chipmunks, voles and flying squirrels.

Large herbivores include elk and deer, while bobcats, bears, wolves and mountain lions are the major predators.

Salmon have a special role in the health of these rainforests; they swim upstream to spawn each year and are preyed upon by bears and bald eagles. The fish are carried off into the forest and their carcasses feed other animals and add nutrients to the forest soil.

Named after the Chilian city Valdiva, the Valdivian Temperate Rainforest is located on the west coasts of Chile and Argentina.

These temperate rainforests occur in a narrow strip along the coast, with the Andes Mountains rising to the east.

The warm, Humboldt Current that flows along the coast gives rise to humid air which flows inland until it strikes the foothills of the Andes, whereupon it releases its moisture as rain. Glaciers in the Andes, as well as snow on the higher peaks, also provide water that feeds into the forests.

The trees are mostly broad-leaved evergreen species, including southern beeches, laurels and the olivillo (Aextoxicon punctatum).

Conifers present in this region include the monkey-puzzle tree (Araucaria araucana), podocarps, and the alerce (Fitzroya cupressoides).

The understory consists of bamboo thickets. On the forest floor grow ferns, fungi, mosses and liverworts. There is a high level of endemism amongst the tree species.

Among the mammals present here are otters, the pudú (the smallest deer in the world), and two endemic marsupials: the monito del monte and the Chilean shrew opossum, both of which are small insectivores.

Birds found in these forests include the Andean goose, owls, vultures, hummingbirds and the striking Magellanic woodpecker, with its bright red head and crest.

Many species of tree found in the temperate rainforests of New Zealand, Australia and the Australian island state Tasmania have their origin many millions of years ago, when these lands were part of the supercontinent Gondwanaland.

After these regions split from Gondwanaland some 85 million years ago, their forests were already populated with podocarps (primitive conifers) and southern beeches (primitive broad-leaved flowering trees) such as the myrtle beech (Nothofagus cunninghamii).

In the temperate forests of Tasmania, the cypress Athrotaxis selaginoides, also known as the King Billy Pine, is common. The species is endemic to Tasmania.

Animals that live in Australian temperate rainforests include marsupials such as the koala, tiger quoll, antechinus and pademelons; two monotremes (the short-beaked echidna and the platypus); and birds including bowerbirds and lyrebirds. Lizards, snakes and frogs are also common.

Present in Tasmanian forests are the eastern quoll, the Tasmanian devil, and the long-tailed mouse, all of which are endemic to the island.

New Zealand has no indigenous mammals other than a few species of bats. The temperate rainforests here are populated mostly by birds. Keas, pukekos and kiwis use the forest resources, and nest on the ground. The small animals present here are invertebrates such as snails, slugs, centipedes, beetles and spiders.

Threats To The Temperate Rainforest Biome

It is encouraging that there are many protected areas and parks within the forests, but these fragments are small and many of the animal species are left unprotected. A large proportion of temperate rainforest species throughout the world have become extinct, and many others are facing extinction in the near future.