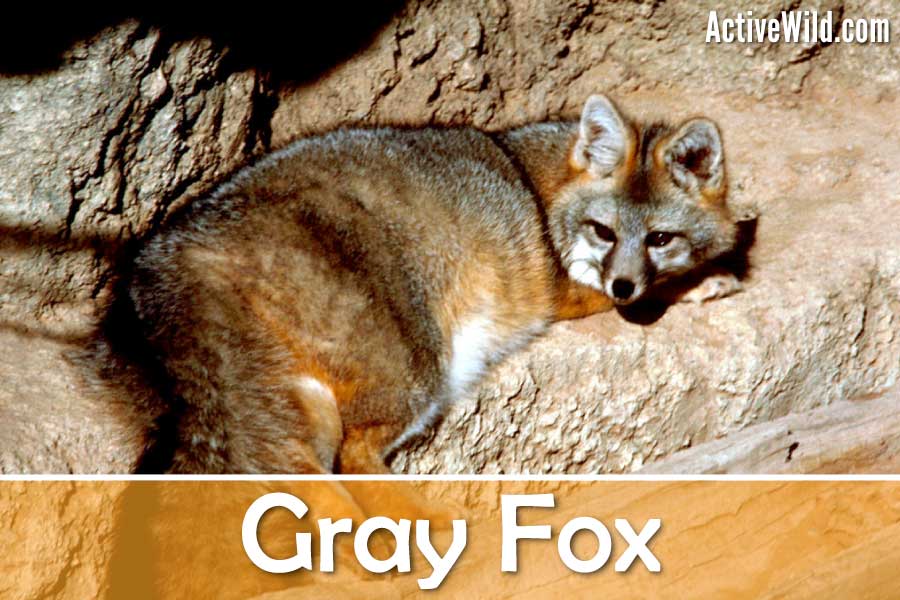 The gray fox is a small, omnivorous, new world fox species belonging to the family Canidae (the dog family). Sometimes known as the “tree fox” or “cat fox”, the gray fox is one of only two canid species that can climb trees.

Although the gray fox is fairly common, it is elusive and can prove difficult to spot in the wild. It is widespread across North and Central America and is found from southern Canada all the way down to Venezuela and Columbia. 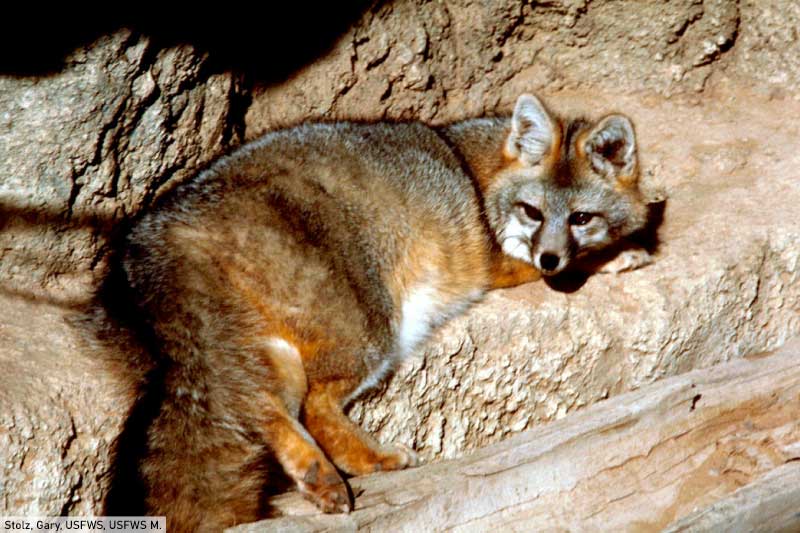 How To Identify A Gray Fox

The gray fox is a medium-sized canid with a long body and relatively short legs. As a juvenile it is dark brown but by the time it reaches adulthood its coat is predominantly gray, with patches of white and reddish-brown.

The fox has black patches on the muzzle and nose, and black stripes over the eyes . Its tail is long–about one third of its body length–and has a black stripe running along the upper side and a black tip.

The fox’s face, back and sides are gray and speckled with white and black. Its sides, neck and outer lower legs are reddish-brown, and there are patches of white on the cheeks, chest, inner legs and undersides.

You can see footage of gray foxes in the video below:

Gray foxes are often mistaken for red foxes (which aren’t always red) but there are a number of ways to tell the two species apart.

The tail of a gray fox has a black stripe running along its upper side and a black tip. The red fox’s tail lacks the black stripe, and has a white tip. The legs of the gray fox are grey / reddish-brown, whereas those of the red fox are black. 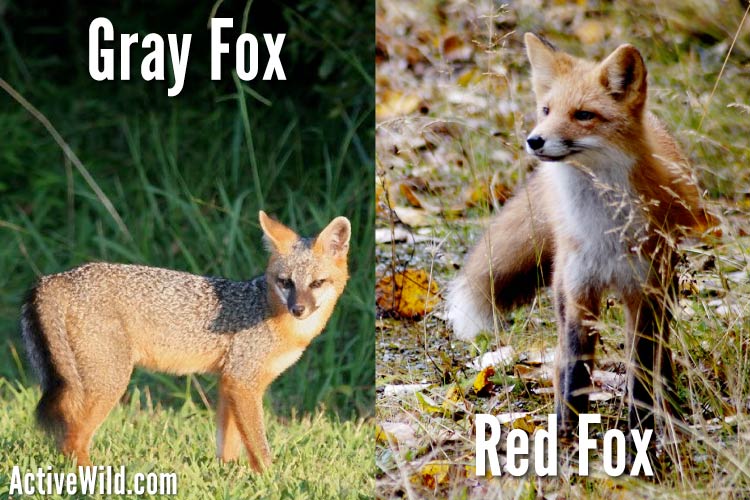 A close inspection of the gray fox’s eyes will reveal oval-shaped pupils. Those of the red fox are slit-shaped.

There are 35 living species and 14 genera in the dog family Canidae. Within this family are all the world’s wolves, coyotes, foxes, and jackals, not to mention domestic dogs (which most biologists consider to be a subspecies of the gray wolf).

Unlike animals such as the red fox, swift fox, kit fox, and fennec fox, the gray fox does not belong to the “true fox” genus Vulpes. Instead, it is one of only two members of the genus Urocyon, the other being its closest relative, the island fox (Urocyon littoralis).

(The island fox is a small fox that is native to the eight Channel Islands of California.)

Where Is The Gray Fox Found?

The gray fox is widespread throughout much of North America, with populations found from southern Canada to northern South America.

Although its distribution is vast, there are some areas in which the gray fox is not found. These include the mountainous areas of the northwestern United States, parts of the Great Plains, and the eastern coast of Central America.

The gray fox is an adaptable animal, able to live in a wide range of habitats, including forests, woodlands, farmland and on the margins of urban areas.

It is typically found in woody areas such as forests, woods and brushland, and in farmland bordered by woods. The species prefers habitats that are close to water.

Like other canids such as the coyote and red fox, the gray fox has adapted to the presence of humans. Living close to farms and towns provides the gray fox with several benefits, including an increase in prey items such as mice and voles, and a reduction in the risk of predation by coyotes and bobcats.

The gray fox makes dens in caves, rock crevices, hillsides, trees, and hollow logs. It usually only uses these dens in the mating season and when raising its young.

The gray fox is an opportunistic forager and will eat virtually anything edible it comes across, including all types of meat, fruits, vegetables, and insects. The diet of this adaptable mammal varies according to its geographic location, and changes with the seasons.

Common prey items include small mammals such as mice, voles, and cottontail rabbits. In the spring, the fox increases its consumption of fruit and nuts. In the summer and autumn months, insects such as crickets and grasshoppers become a staple part of the fox’s diet in some parts of its range.

The gray fox stores any excess food it finds in holes it digs in the ground. The fox marks these holes with urine or with scent produced by the large musk gland on its tail. This warns off other animals and helps the fox to locate the food store at a later date.

The gray fox is active all year round. It is either nocturnal or crepuscular (active at dawn and dusk), leaving its den at twilight or during the night to hunt.

The species is an adept climber and frequently climbs trees, either by leaping into the low branches or by shinnying up the trunk.

The gray fox is solitary, only actively seeking company in the breeding season, when it forms monogamous pairs. It is unclear whether the pairings last for a single breeding season or for life.

The size of the gray fox’s home range is dependent on the nature of the terrain and the availability of food and typically falls between 188 and 1633 acres (75 – 653 ha). The fox marks the boundaries of its territory with feces and urine to warn off competitors. These markings also advertise the fox’s status to potential mates.

The gray fox is a vocal animal and produces a variety of sounds, including short barks, yips, chuckles, growls, and squeals.

The species also communicates with scent. Its scent-producing musk gland–the largest of any North American canid–extends almost half-way along the tail. The scent, which can be detected by humans walking in gray fox territory, may help individual foxes to recognize one another.

Gray foxes form monogamous pairs during the breeding season, which takes place in the winter from January through to March. The fox’s gestation period lasts approximately 53 days, with litters of four to five cubs being born in April and May.

Before giving birth, the female will find and prepare a den. During this time the male does the majority of the hunting. Dens are lined with bedding made from the fur and feathers of prey, as well as with dried leaves, bark, and grass.

The female nurses the kits for the first two to three weeks of their lives. The infants then start to eat solid food brought to them by their father.

The male plays an active role in raising the kits until they are around ten months old. He teaches the kits hunting skills such as stalking and pouncing and both parents will take the young hunting from four months of age.

At ten months old the kits are sexually mature and will leave the family.

The lifespan of a gray fox in the wild is six to eight years in the wild. The oldest-known wild individual was 10 years old.

Is the Gray Fox Endangered?

The gray fox is not endangered, and has the IUCN conservation status “Least Concern”. The main threat to the gray fox is habitat loss, which is forcing the species to live in ever-closer proximity to humans. In the long term this may have a detrimental effects on the species’ population.