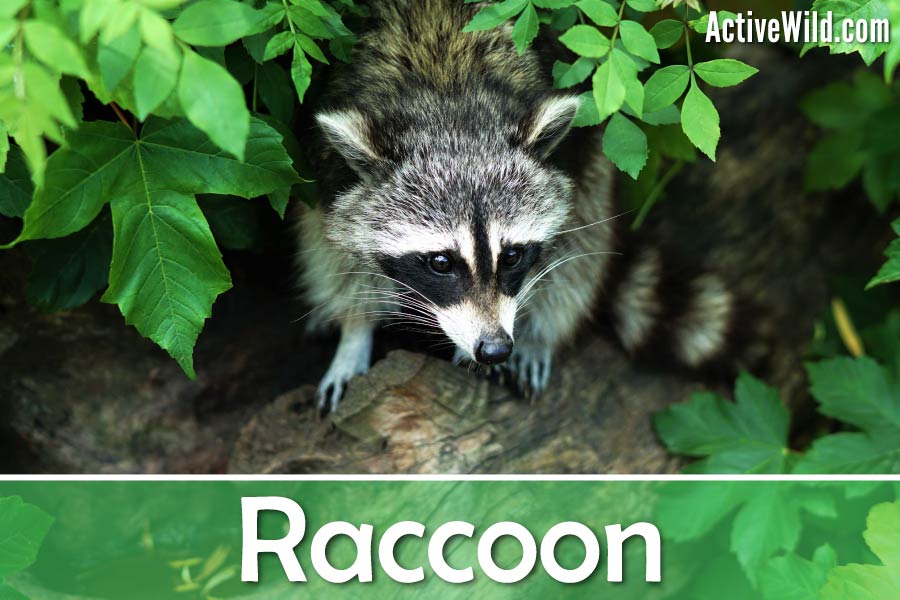 The raccoon is a mid-sized mammal that is widespread throughout much of North America. It is a member of the carnivoran family Procyonidae, which also includes animals such as coatis and ringtails. The raccoon originally lived in forests, but this adaptable animal is today found in a wide variety of additional habitats, including urban environments. 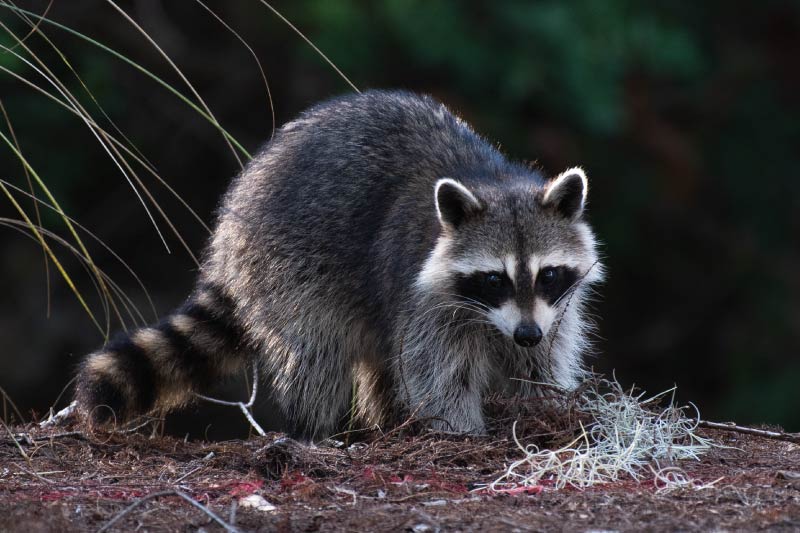 Stealthy, clever, and adaptable, the raccoon (Procyon lotor)–also known as the “common raccoon” to distinguish it from other raccoon-like animals–is an emblem of backyard biodiversity across North America.

Raccoons can thrive in almost any environment: swamps or deserts, sweltering jungles or frozen tundra. And because they’ll eat just about anything, they can live very well in close proximity with humans. It’s not for nothing that the raccoon has a reputation for breaking into dumpsters and stealing people’s trash.

The raccoon’s name comes from the Powhatan language and means “he scratches with his hands.”

Raccoons vary in size from 10 pounds to over 50 pounds, largely based on where they live and how much food is available. In the Florida Keys, local raccoons are barely bigger than kittens, averaging 4-6 pounds as adults.

Raccoons are mostly nocturnal, but they’re flexible in this as in everything else. If more food is available during the day, raccoons can adjust their sleep schedule.

There’s an urban legend that raccoons only come out during the day when they’re infected with rabies, and that day-active raccoons are therefore especially dangerous. The reality is that raccoons can be active at various times of day and that all raccoons are potential carriers of rabies.

What Type Of Animal Is A Raccoon?

The raccoon belongs to an unusual family of mammals called the Procyonidae. Also in this family are several other raccoon-like animals, including the ringtail of the U.S. southwest and the coatis and kinkajous of Central and South America.

In general, procyonids have raccoon-like coloration, with black-and-white face markings and a pattern of rings on the tail. But most are generally longer and skinnier than raccoons. Because raccoons live in colder climates than other procyonids, they are stockier and longer-haired than their cousins.

For a long time, scientists had a hard time finding the proper place of Procyonidae on the tree of life. Although they look like large rodents, Procyonids clearly belong to the order Carnivora alongside bears, cats, dogs, weasels, and other pointy-toothed mammals. But beyond that their placement has been a mystery.

Early on, they were thought to be small bears. But the most recent evidence suggests they’re more closely related to mustelids (weasels, ferrets, otters, etc.) than bears. Even so, the relationship is probably not all that close: procyonids appear to belong to a pretty old evolutionary lineage and are genetically quite distant from their weasel cousins.

Another cousin of the procyonids is the red panda, which shares the ringed tail and high-contrast face markings of raccoons. Red pandas, however, belong to their own family, the Ailuridae.

The first procyonids appear in the fossil record about 35 million years ago, at a time of high temperatures and lots of warm, wet forests. In that climate, there were lots of ecological niches available for tree-dwelling omnivores, including not only the first procyonids but also the first monkey-like ancestors of modern primates.

Although primates and procyonids evolved completely separately, they ended up with a lot of similar adaptations: cleverness, dexterity, broad diets, and flexible social behavior.

Over millions of years, the procyonids diversified and spread across North and South America. The largest known procyonid was Chapalmalania, a bear-sized raccoon that lived in Argentina some 2-3 million years ago.

Like bears, Chapalmalania was probably an omnivore rather than a strict predator, but it would have been extremely dangerous when threatened. (If you’ve ever interacted with an angry raccoon, you can well imagine how fearsome they would be if they had a bear’s size and strength.)

Why Do Raccoons Wash Their Food?

Being nocturnal, raccoons are less dependent on vision than their other senses. Instead they rely on their acute senses of hearing, smell, and especially touch.

Raccoons have several adaptations to fine-tune their tactile senses. The somatosensory cortex, which processes touch in the brain, is larger in raccoons than any other animal. The raccoon also has vibrissae, or long whisker-like hairs, on its toes. Just like the whiskers on a cat’s face, these vibrissae provide detaiiled information about whatever the animal is about to touch.

The tactile sense is the reason for one of the raccoon’s most unusual behaviors, namely “washing” their food. Raccoons often run their fingers over food before eating it, and if they’re near water they might dunk the food as if to clean it off. But they’re not really washing their food; they’re exploring it.

Being primates, you and I do this visually: if we get an unfamiliar morsel of food we might turn it over, look at it from different angles, maybe sniff it once or twice before we decide whether to eat it. “Washing” serves the same function, providing the raccoon with information about what it’s about to eat.

The washing behavior is so unusual that it’s the source of the raccoon’s name in several languages. We’ve already seen that “raccoon” comes from the Powhatan word for “he scratches with his hands.” The Spanish name is mapache, which comes from an Aztec word with a similar meaning. And in Norwegian the raccoon is called vaskebjørn, or “washing-bear.”

Why Do Raccoons Have Masks And Ringed Tails?

The most striking feature of a raccoon’s appearance is the black mask across its eyes. The function of the mask isn’t entirely clear. It may be a support for their vision: like the eye-black worn by athletes, it may reduce glare and help the animal see.

There are problems with that hypothesis, though. For one thing, there’s not much hard evidence that eye-black actually reduces glare, either in humans or any other animal. For another, raccoons are nocturnal and generally wouldn’t need protection from glare.

The mask might also be used for visual identification. Each individual raccoon has a unique face pattern, and raccoons might use the different masks to identify friends and strangers in the dark.

The same is true of the pattern of rings on the raccoon’s tail – no two tail patterns are identical and raccoons can use them to tell who’s who at a distance. Other animals with banded tail patterns, such as the ring-tailed lemur, use them in the same way.

Like many adaptable omnivores, raccoons are intelligent problem-solvers. They can solve puzzles for a food reward and will remember the solution for several years after learning it. They have been compared with primates in terms of their learning speed.

Raccoons are highly adaptable omnivores. They can learn to exploit any food source in their environment: fruits, insects, worms, eggs, and even the occasional bird or small mammal.

Raccoons’ extreme adaptability extends to their social life as well. They can be solitary, but will also form social groups under favorable conditions. Scientists have described their social structure as “fission-fusion,” a highly fluid system in which long-term social groups can form and splinter out into subgroups over the course of hours, days, or weeks. It’s the same social system observed in chimpanzees and elephants.

Baby raccoons, called kits, are completely helpless at birth. It takes a few months before they can move around on their own, and even then they stick close to their mother and siblings. A baby raccoon has a lot to learn about how to socialize, where to find food, and what dangers it might encounter in its environment.

Raccoons eventually leave their birth group and strike out on their own. They do this at different ages depending on the local conditions. In the northern parts of their range, raccoons disperse at one or two years old, whereas in more southerly areas they’ll disperse much earlier.

The harsher the winters, the more dangerous it is for a young raccoon to try and survive on its own, so raccoons in cold regions stay with their mothers later.

Raccoons are highly abundant and their populations are increasing across most of North America. So they aren’t a species of concern from a conservation perspective. In fact, the problem is more likely to be too many raccoons than too few.

Because they’re so voracious and adaptable, raccoons can impede the recovery of threatened species. Sea turtles, for example, have to be protected from raccoons that would happily eat their eggs.

Some people keep raccoons as pets. It’s easy to see why – they’re cute and fuzzy and similar in size to a large cat. But like all wild animals they make terrible pets. For one thing, they carry a lot of disease. Rabies is the most deadly of the bunch, but raccoons also carry a variety of unpleasant parasites. Beyond that, they can be extremely aggressive. And because of their curious and mischievous nature they can tear a house to pieces looking for food.

Outside their native range in North America, raccoons are an invasive species. They were introduced to Japan and central Europe as part of the pet trade, and populations have been exploding ever since.

The same qualities of adaptability and cleverness that make them so successful in their native habitat make them difficult to control in areas where they’re introduced.

Raccoons can carry rabies and other diseases, and when uncontrolled they can do considerable damage to agriculture. But despite the risks most countries have no legal restrictions on importing raccoons for the pet trade.