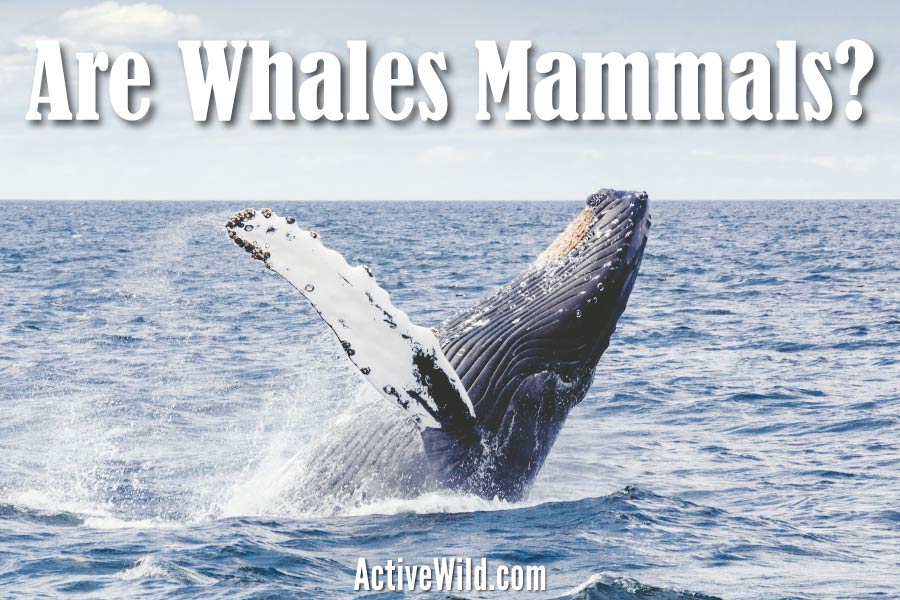 Why Are Whales Mammals?

Whales, and other, related aquatic mammals such as dolphins and porpoises, are descended from land mammals and possess all the characteristics necessary to identify them as being mammals rather than fish (or any other type of animal).

Whales breathe air and have lungs; whales are endotherms (i.e., they’re warm-blooded); whales give birth to live young; and female whales have milk-producing mammary glands with which they feed their young – all of which are characteristics of mammals.

Whales even have hair (another mammalian characteristic), but this isn’t always obvious. Although whales have smooth, hairless skin, some whales have hair before they are born but not after, others have hair follicles (the organs from which a hair grows), and some even have some hairs as adults (although it’s barely noticeable).

Like land mammals – and unlike virtually all fish – whales breathe air with lungs. Whereas fish can acquire oxygen from the water with their gills, whales still have to come up to the surface to breathe air.

Whales breathe air via openings called “blowholes”, which are located on the top of the head. When a whale surfaces, it emits a powerful blast of waste air from its lungs from its blowhole before taking in another lungful.

If you happen to be close to a whale when it exhales, you may even be able to smell its fishy breath!

A whale’s blowhole is its nostrils; as the land-going ancestors of whales slowly adapted to an aquatic existence, their nostrils slowly migrated to the back of the head.

Whales can’t actually breathe with their mouths, which are connected only to their stomachs and not to their lungs.

Did you know that some whales have a single blowhole while others have two?

Whales And Other Cetaceans

If you’re still to be convinced that whales are mammals, let’s take a look at the ancestors of whales and their eventual evolution into the whales of today.

Whales belong to Cetacea, a group of aquatic mammals that also includes dolphins and porpoises. A member of Cetacea is known as a cetacean.

Cetacea itself is part of a larger group of mammals: the order Artiodactyla, a group of hoofed mammals also known as the “even-toed ungulates”.

Other even-toed ungulates include cattle, pigs, deer, antelopes and hippopotamuses.

Even-toed ungulates are characterized by having two weight-bearing toes on each foot, although clearly this doesn’t apply to whales, whose forelimbs have evolved into flippers and whose hind limbs have disappeared.

The Evolution Of Whales

One of the earliest-known cetaceans is Pakicetus, a dog-sized hoofed mammal that lived on the coast of Pakistan around 50 million years ago. This predatory animal likely had a hunting strategy similar to that of a crocodile, plucking passing fish out of the sea with its powerful jaws.

Pakicetus had functioning legs and its nostrils were located on the end of its snout (as we found further up the page, a cetacean’s blowhole is its “nostrils”). Pakicetus would have been able to move around on land and clearly was a whale at the very beginning of its evolutionary journey.

Nevertheless, scientists believe that this Asian mammal was one of the first cetaceans. Over the next 5 to 10 million years, Pakicetus’ descendants would become fully aquatic and much more “whale-like”.

The animals from which early early cetaceans such as Pakicetus were descended are also the ancestors of today’s hippopotamuses.

Hippopotamuses are large, smooth-skinned, semi-aquatic mammals, so it’s not much of a surprise to find that they are the closest living land relatives of whales and other cetaceans.

Another early ancestor of whales is Ambulocetus. Ambulocetus lived in Asia around 48 million years ago. The size of a large dog and built like an otter or sealion, Ambulocetus was a predator of fish and reptiles. It swam using its large, possibly webbed, feet as paddles.

Over thousands of years these predatory semi-aquatic mammals would become ever more aquatic and less dependent on land. Their forelimbs would become flippers. Their hind limbs would become smaller and eventually disappear altogether. Their hind quarters would become powerful tails and develop flukes – the horizontal fins at the end of a modern whale’s tail. The nostrils would migrate to the back of the head to become a blowhole.

The Two Main Types Of Whales: Mysticeti And Odontoceti

Around 30 million years ago the early whales would split into the two main types of whale that we know today: Mysticeti (baleen whales) and Odontoceti (toothed whales).

The toothed whales would develop echolocation – a means of sensing one’s surroundings using reflected sound. The baleen whales would evolve into filter feeders, reaching immense sizes by feasting on vast numbers of small ocean animals such as krill.

On this page we’ve discussed how whales possess all of the characteristics of mammals and that they are descended from semi-aquatic, predatory hoofed mammals that lived on the coast of Asia around 50 million years ago.

The next time someone asks you “Are Whales Mammals?” you’ll be able to reply with certainty that whales are mammals, and that they belong to the same order, Artiodactyla, as land mammals such as cattle, deer and antelopes.