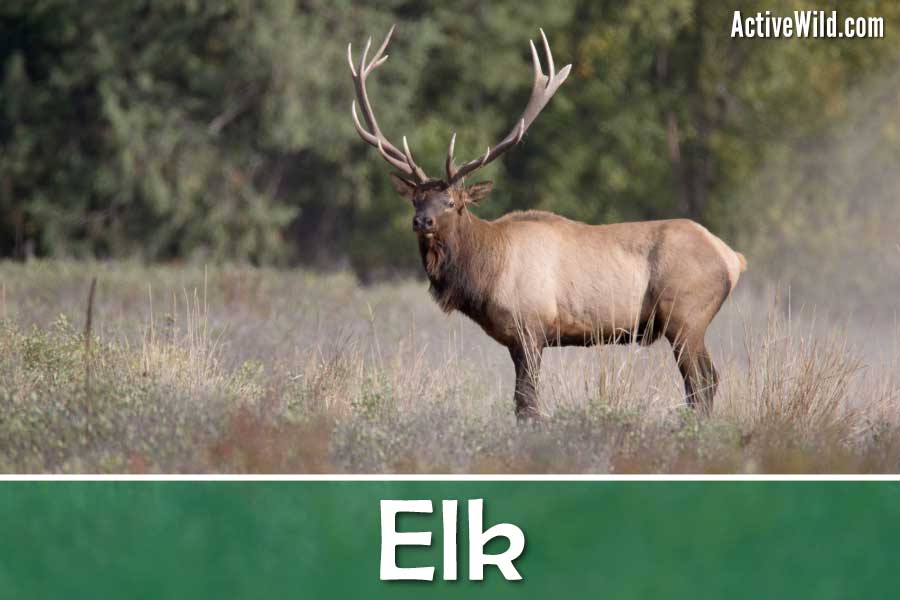 Elk Facts At A Glance

Elk are large ungulates (hoofed mammals) with dark reddish-brown coats and pale patches on their rumps.

The color and thickness of an elk’s coat changes with the season; in winter it becomes thick and greyish, whereas in summer it is thinner, shorter and darker in color.

In winter both male and female elk develop a mane of dark hair around their necks.

The elk is also known as the wapiti. The name wapiti comes from Shawnee and Cree word “waapiti”, which refers to the elk’s white rump.

Male elk develop large, branched antlers during the spring. When the antlers are fully developed, they may weigh as much as 40 lb. (18 kg).

As is the case with most deer species, female elk do not grow antlers. (A notable exception to this rule is female reindeer / caribou, which do have antlers.)

The bull elk’s antlers are used to attract females and to fight off rival males and predators.

The antlers have a central core of bone and, while growing, are covered with a layer of skin known as velvet, which is richly supplied with blood vessels.

The velvet is rubbed off once the antlers are fully developed. When the mating season is over, the antlers are shed; a new pair will begin to grow at the start of the next spring.

During the rut (mating season), bull elk emit characteristic, high-pitched screaming calls. This behavior is known as “bugling”. These extremely loud and penetrating calls can be heard from several miles away.

Elk belong to the family Cervidae – the deer family. Cervidae is part of a larger group of mammals: the order Artiodactyla, whose members are also known as “even-toed ungulates”. This group of hoofed mammals also contains animals such as cattle, sheep, giraffes and hippopotamuses.

Surprisingly, Artiodactyla also includes the cetaceans (animals such as whales, dolphins and porpoises). You can find out why on this page: Are Whales Mammals?

Representatives of the deer family first appear in the fossil record some 25 million years ago in Eurasia. Today, up to 51 species of deer are recognized (source)

There are no deer in the North American fossil record until the early Miocene period, approximately 20 million years ago. These prehistoric deer species are most likely the ancestors of the modern-day elk.

The naming and classification of the elk has been a confused affair. Early European visitors to North America named the species elk believing them to be moose (Alces alces), which in Europe are called elk.

This is why the word “elk” can refer to two different animals: the elk in North America; and the moose in parts of Europe (although the word “moose” is also frequently used in Europe).

For many years, elk were considered to be a subspecies of red deer (Cervus elaphus), which are found in Europe, as well as in western and central Asia. However, genetic studies conducted in 2004 found that the elk and the red deer are separate species. The elk’s scientific name was changed to Cervus canadensis to reflect these findings.

The study found that the elk is in fact more closely related to Thorold’s deer (Cervus albirostris) and sika deer (Cervus nippon), than it is to the red deer.

A number of North American elk subspecies are recognized.

The tule elk subspecies (Cervus canadensis nannodes), native to California, was in 1870 considered extinct but a few years later a breeding pair was discovered. Subsequent conservation efforts have seen the tule elk’s population rise to 4,000.

Roosevelt’s elk (C. canadensis roosevelti) is the largest North American elk subspecies. It was named after President Theodore Roosevelt, who established Mount Olympus National Park in Washington State in 1909 in order to protect the subspecies.

Where Are Elk Found?

Historically, elk inhabited large parts of Eurasia, and were one of several species that crossed the Bering land bridge from eastern Asia into Alaska.

Other species to make this crossing include caribou, moose, bears and, much more recently, humans.

It is estimated that around 10 million elk once roamed the forests and mountains of North America. With the arrival of European settlers, elk herds were gradually pushed to the western regions of the USA, until they were eventually confined to areas around the Rocky Mountains.

Today, elk are found across most of North America, and are estimated to number about one million individuals.

Elk are still found in eastern Asia, but are no longer present in Europe.

The elk traditionally inhabits forests, forest edges and woodlands, often in mountainous regions. The species is also found in grassland and moorland habitats.

Across their range, elk undergo migratory movements as the seasons change. In winter they move down to lower elevations where the temperatures are less extreme; in spring they migrate to higher elevations in search of new growth to eat.

Elk are ruminants. Ruminants have four stomachs in order to help with the digestion of the grass and leaves which form the majority of their diet.

Ruminants regurgitate food from the first stomach back into their mouths as “cud”. It is then chewed thoroughly before being passed along to the other stomachs.

In addition to grass and leaves, the elk eats tree bark, particularly in winter when food is scarce. In spring it forages on sprouting saplings.

Elk usually live in small, single-sex herds for most of the year. This provides protection against predators such as wolves, mountain lions, coyotes, and bobcats.

During the breeding season, which occurs in early fall, males compete for access to the female groups.

The males show their dominance by bugling, ritualized posturing and wrestling with their antlers. A winning male will take control of a group of females known as a harem and mate with them.

A male with a harem will spend most of his time defending his females against rival males. During this time a bull will often go without eating and can lose as much as 20 percent of his body mass.

Only bulls in their prime (between 8 and 10 years of age), and in peak condition, will be able to keep control of a harem during the rut.

Elk calves are born in May and June, after a gestation period of eight and a half months. The calves have spotted coats and are scentless; this helps them to escape detection by predators.

Calves stay with their mothers for about a year, until the birth of the next calf.

It is estimated that at the start of the 20th Century only 50,000 elk remained in the USA. This was a result of the species having been over-hunted for its meat and hides. The herds that remained had been confined in marginal habitats in the west.

Since then, there have been many reintroduction projects and today herds of elk have been re-established in several eastern states, including Kentucky, North Carolina, Tennessee, Pennsylvania and Wisconsin.

Herds of elk have been introduced in New Zealand, Australia and Argentina, where they adapt well to local conditions and are ranched for a profit. These herds are managed both for the harvesting of meat and for hunting.

In addition, a bull elk can produce about 22 lb. (10 kg) of antler velvet each year. This is sold in Asian countries, where it is used in traditional medicine.

Because elk are ranched commercially, they are not in danger of becoming extinct. In addition, there are several nature reserves in the USA where wild herds of this impressive species are protected. These include the Yellowstone National Park and the National Elk Refuge, both in Wyoming.

The elk has a conservation status of “Least Concern”, and its global population is thought to be increasing.

Phillips, J. 2013. A Citizen’s Guide to the Tule Elk of California. California Nature Center. Accessed on 30 October, 2020, from https://www.biologicaldiversity.org/campaigns/protecting_Point_Reyes_elk/pdfs/TuleElkBrochure.pdf