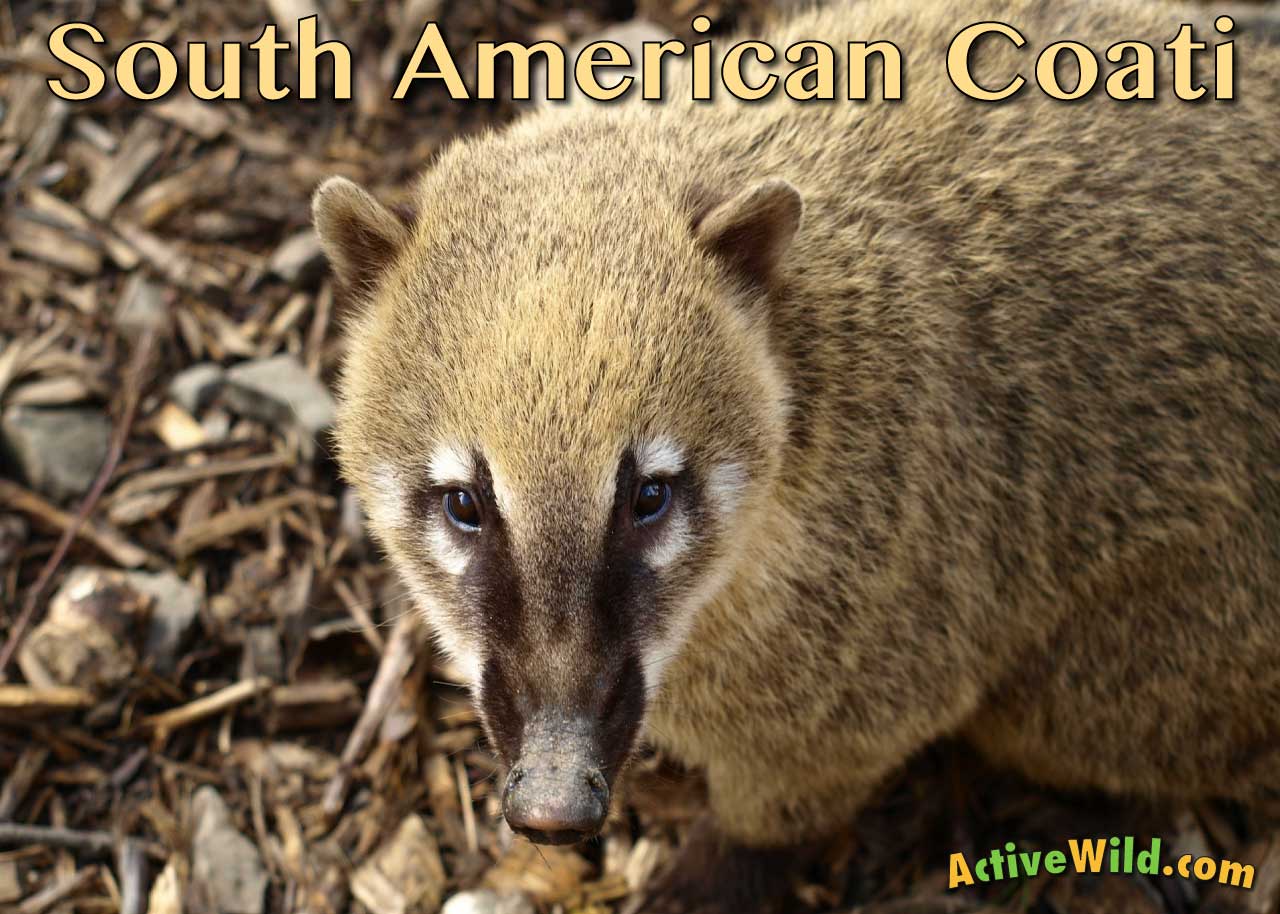 If you’re in a South American rainforest and come across a group of cat-sized mammals searching for food among the leaf litter then the chances are they’ll be South American coatis.

These long-nosed, stripy-tailed mammals are members of the Raccoon family. They spend the day foraging on the forest floor before making their way back into the rainforest canopy at night… 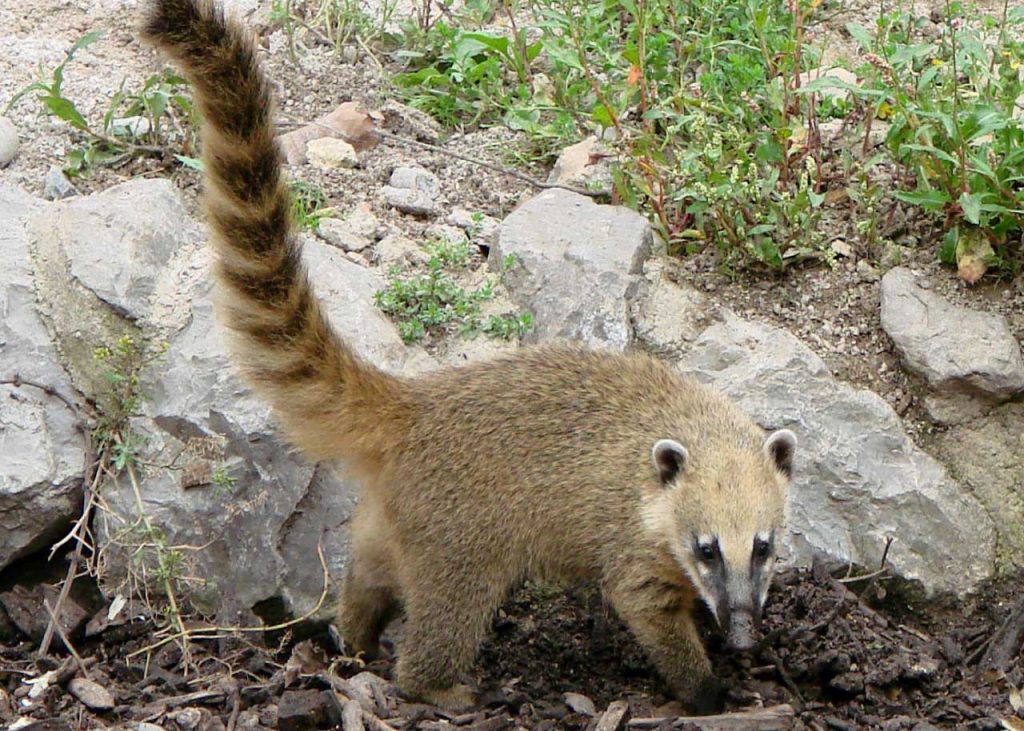 The most notable characteristics of the South American coati are its long tail and its long, narrow snout.

The tail is roughly the same length as the coati’s combined head and body length, and is often held erect in the air. The elongated muzzle turns slightly upwards and is very flexible. The coati also has strong forelimbs and robust claws.

The color of the South American coati’s thick fur is variable: the back and sides may be brown, gray, or reddish, while the undersides are usually white. The tail is black to brown in color and has yellow rings (though in some individuals the rings are very faint).

There are white markings on the inner rim of the ears and around the coati’s eyes. The snout is brown (which distinguishes the species from the related white-nosed coati).

Where Is The South American Coati Found?

The South American coati is widely distributed in tropical and subtropical regions of South America. The species’ range extends from northern Argentina and Uruguay in the south to Colombia, Venezuela and the Guianas in the north. The only South American country in which the species is not found is Chile.

The greatest density of South American coatis is found in the lowlands east of the Andes mountain range.

The South American coati is found in a variety of forested habitats, including cloud forest, evergreen rainforest, deciduous rainforest, riverine gallery forest (forest that grows next to a river) and dry scrub forest (areas with dense, low-growing vegetation).

The species occurs at a wide range of altitudes. On the slopes of the Andes mountain range, the coati is present at elevations of up to 2,500 m (8,200 ft.).

The species is diurnal (active during the day) and spends most of this time foraging on the forest floor. During the night the coati seeks shelter in the forest canopy. Coatis also mate and give birth in the trees.

Members of a coati band make whining noises while foraging, possibly to ensure that individuals don’t wander too far from the group. The coati makes loud warning calls consisting of woofs and clicks if a predator is seen.

The South American coati walks on all fours when on the ground. While climbing, the animal uses its tail to balance and is able to descend a tree headfirst by rotating its ankle joints 180 degrees. The species is also a capable swimmer.

The mating season of the South American coati tends to occur when fruit is most locally abundant. Depending on the area this could be between January and March or between October and February. All females in the same group become receptive at the same time and may mate with multiple males. Mating takes place in the trees.

The gestation period is 74 to 77 days. The female makes a nest in the trees and gives birth to 2 to 7 young. The infant coati’s eyes open around at 10 days of age, and it is able to move around and climb by the time it is 4 weeks old.

The female nurses her young for 4 months. Female coatis usually remain in their natal group after reaching sexual maturity at around 2 years of age. Males become sexually mature at around 3 years, and usually leave the group at this time.

What Do South American Coatis Eat?

The South American coati is an omnivore. Its diet consists mainly of fruit and insects. It will also eat other invertebrates (including spiders, scorpions, millipedes and centipedes) and plant matter. The coati will also occasionally eat small birds, reptiles and mammals, birds’ eggs, and carrion.

The coati’s diet varies seasonally, probably reflecting changes in the availability of specific foods. Lactation and most of the growth of the young appear to coincide with a greater abundance of spiders and millipedes in the diet.

The coati uses its long snout to search for food inside crevices and under leaf debris. Its powerful forelimbs and claws are used to tear open rotting logs and to overturn rocks to find prey.

The South American coati has a number of predators, including cats such as jaguars, mountain lions, ocelots and jaguarondis, together with boas and large birds of prey.

Members of a coati group make alarm calls when a predator is spotted. The group will climb into the trees to evade a land-based predator, or rush from the trees to the safety of the forest floor if the predator is a bird of prey or a tree-dwelling species.

Is The South American Coati Endangered?

The South American coati is rated ‘Least Concern’ by the IUCN.

The species has a wide distribution range and no major threats have been identified.

Locally, a number of South American coati populations may be in decline due to deforestation and being hunted for food.