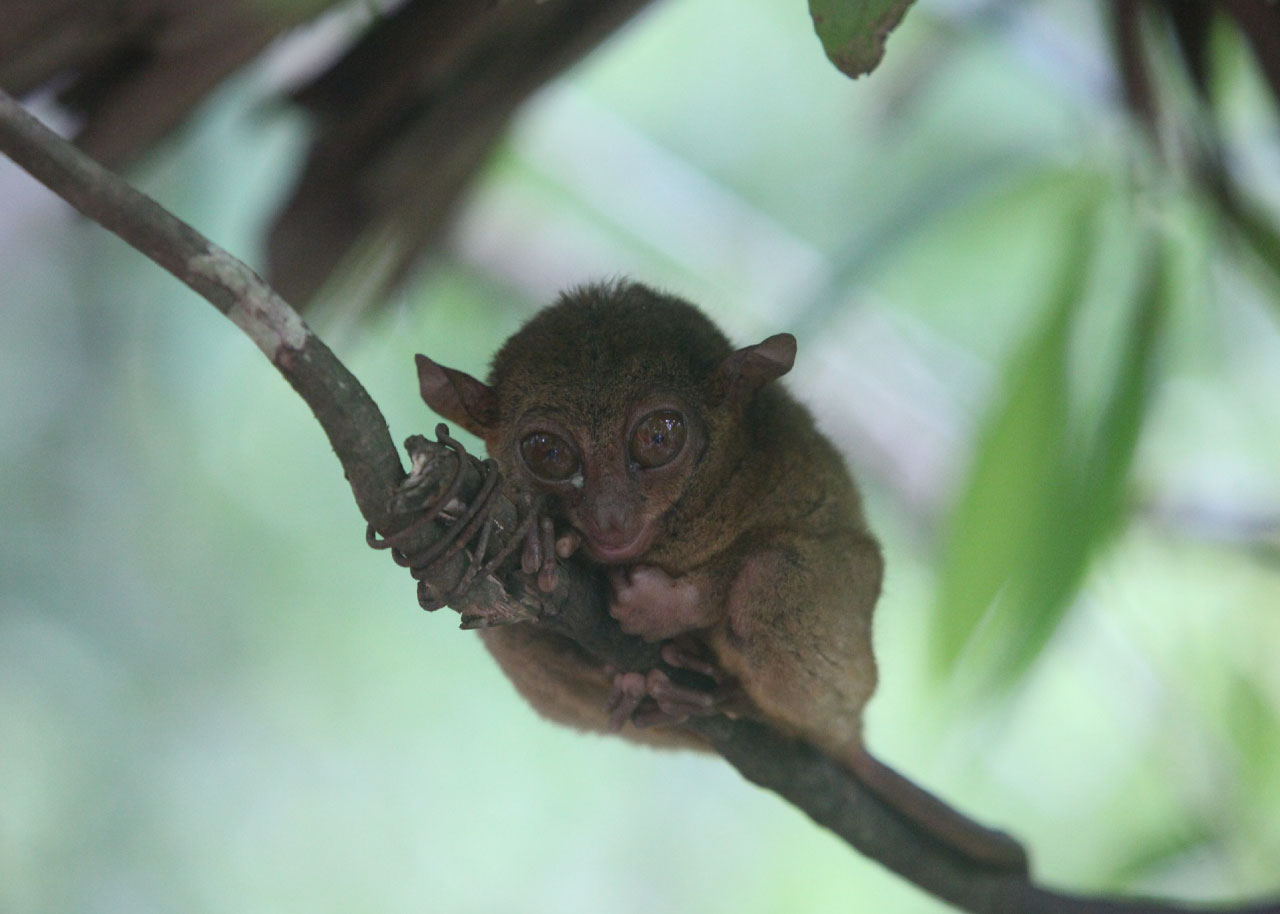 Tarsiers are squirrel-sized primates found in rainforests and other forest habitats in Southeast Asia. These nocturnal animals have large eyes, powerful hind legs and long, thin fingers. They are experts at leaping through the trees in search of their insect prey.

Tarsiers are mammals in the family Tarsiidae. There are ‘around’ 10 species of tarsier; scientists disagree over the exact number of species in the tarsier family (see the ‘Tarsier Species and Conservation Status’ section, below). What is known is that several tarsier species are threatened with extinction.

The IUCN currently recognizes 10 tarsier species, all of which are in the genus Tarsius:

The taxonomy* of tarsiers has been much debated and is continually being updated as a result of new research. It has been suggested that the 10 species should be split between three genera instead of the single genus Tarsius.

The confusion over tarsier classification makes the planning of conservation efforts problematic.

All tarsiers have been negatively affected by deforestation, habitat degradation and habitat fragmentation. The main causes include agriculture (e.g. palm oil plantations), livestock grazing and mining.

* How animals are classified. See this page: Animal Classification for more information.

Is A Tarsier A Monkey?

Tarsiers and monkeys are both primates, both are in the primate suborder Haplorhini, and both share the same ancestors. However, tarsiers are not monkeys.

There are two main groups within the suborder Haplorhini: tarsiers, and the group known as simians, which contains monkeys and apes. The two groups split around 63 million years ago.

Tarsiers are small, squirrel-sized animals. They have round heads, short snouts, large forward-facing eyes, and large hairless ears. The hind limbs are much longer than the fore limbs. The tail is hairless in most species, and longer than the body.

A tarsier’s fingers are very long, and have rounded pads at the tips. The second and third toes of the hind feet have claws (which are used for grooming), instead of nails.

The tarsier’s coat is soft, and can be beige, ochre, buff, brown or gray in color.

Where Are Tarsiers Found

Tarsiers are found on islands in Southeast Asia. They are present in the countries of Indonesia, Malaysia, Brunei and the Philippines.

Tarsiers are typically found in dense lowland or mountainous tropical forests, including rainforests and mangrove forests. Other habitats in which tarsiers may be found include swamps, shrubland (areas in which the dominant foliage is small woody plants).

Some species of tarsier are solitary, while others live in pairs or in small groups. The groups often consist of a dominant male, several females and their dependent young.

Tarsiers are territorial, with both solitary and social species marking their home ranges.

Tarsiers are active either at night or at dawn and dusk. The daylight hours are generally spent in sleeping roosts. These are usually sheltered areas such as tree hollows or vine clusters, and are usually located at heights of between 2 and 5 m (6.6 to 16.4 ft.) above the ground.

Tarsiers communicate by vocalizing and scent marking. Some tarsiers emit ultrasonic calls: the calls of the Philippine tarsier have a dominant frequency of 70 kHz, which is one of the highest recorded in land mammals. Both urine and secretions from scent glands are used to mark home ranges.

Tarsiers spend most of their time clinging to vertical surfaces and usually move around by leaping from tree to tree. They are capable of leaping distances of up to 5 m (16.4 ft.); roughly 40 times their own body length.

While some tarsier species seem to have definite mating seasons, others appear to be able to mate any time of the year.

The gestation period is about 6 months. The female gives birth to a single infant, whose weight can be up to 30% of that of its mother.

Tarsiers are well-developed when born. A new-born tarsier is fully covered in fur and its eyes can open. It is able to cling and climb soon after birth.

The infant is carried and suckled by its mother for the first 2 months of its life. Shortly after this period it begins to hunt independently and disperses to establish its own home range.

What Do Tarsiers Eat?

Tarsiers are the only fully carnivorous primates in the world. The bulk of their diet is made up of insects including moths, butterflies, beetles and ants. They may also feed on small vertebrates such as lizards, frogs, snakes, birds and bats.

Tarsiers are ambush predators. A tarsier will wait in silence, using its sensitive ears and huge eyes to detect its prey in the dark. A tarsier’s neck is extremely flexible, allowing the head to move 180 degrees in both directions as the animal searches for food.

When it has detected a target, the tarsier will leap at it using its powerful hind legs. It grasps the prey in its hands, and is even capable of snatching birds and bats in mid-air.

Tarsiers are vulnerable to predation by many animals, including civets, cats, large snakes and owls.