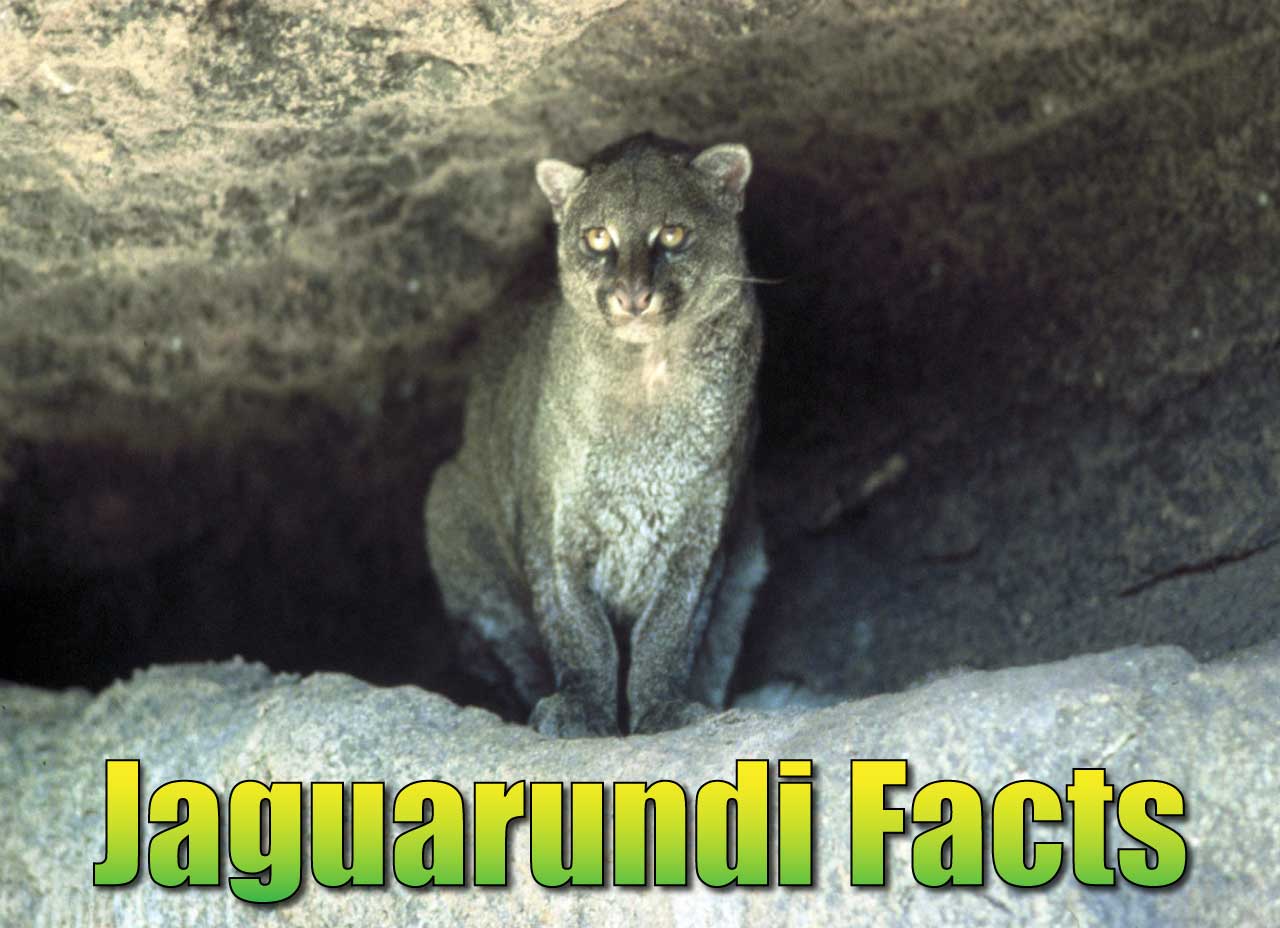 The jaguarundi is a secretive wild cat found mainly in South America (although the species is also present in parts of southern North America). It has a long body and short-ish legs, and appears in two main colors: either deep red or dark brown / black.

This page contains jaguarundi facts, pictures and information. Let’s find out more about this rainforest feline…

Jaguarundi Facts at a Glance

The jaguarundi is a small species of wild cat. Its closest relation is the puma (Puma concolor) and until recently the two species were both placed in the Puma genus.

In 2017, the Cat Classification Taskforce of the IUCN Cat Specialist Group (an authority on the classification of wild cats) assigned the jaguarundi to the genus Herpailurus. The species’ scientific name is therefore now Herpailurus yagouaroundi (rather than Puma yagouaroundi).

The jaguarundi is slightly larger than a domesticated cat. It has an elongated body and relatively short limbs, giving it a slightly weasel-like appearance. The tail is long and tapered, the head small and flattened, and the ears are more rounded than those of other wild cats.

There are two distinct color morphs of jaguarundi. (Color morphs are animals that have different colors, despite being the same species.) The dark morph ranges in color from black to brownish and gray, while the red form (which is sometimes known as ‘eyra’) ranges from tawny yellow to bright chestnut.

The two color morphs can appear in the same litter, thereby confirming that they are not separate species (as was once thought). The jaguarundi’s coat is usually uniform in color, although the undersides of some individuals may be a lighter color, and faint markings can appear on both the face and the undersides.The dark color morph is more common in humid habitats with dense vegetation, while the red color morph is more common in arid, open habitats.

Male jaguarundis tend to be larger and heavier than females found in the same area.

The jaguarundi has a wide distribution range, and is found in parts of North America, Central America and South America. The species’ range spans from Southern Texas and coastal Mexico in the north, to northern Argentina in the south.

Jaguarundi sightings have been reported in Arizona. The species may have been introduced into Florida in the past, although sightings in the state are rare and unsubstantiated.

The jaguarundi occurs in a wide range of open and closed habitats. These can include wet grassland, dry thorn forest, savanna, shrubland, tropical rainforest, and tropical deciduous forest. The species is frequently encountered near water, such as a river, stream or lake.

The jaguarundi is a shy animal. Mostly active during the day, it is typically seen either alone or in pairs. It does, however, appear to tolerate the presence of other jaguarundis nearby.

The species spends most of its time on the ground, although it is a capable climber and swimmer.

The size of the jaguarundi’s home range varies greatly between different populations and can cover areas of between 6.8 and 100 km2 (2.6 and 38.6 sq. mi).

The jaguarundi is unusually vocal for a wild cat. At least 13 distinct vocalizations have been recorded, including purring, whistling, screaming, yapping, chattering, hissing, and a bird-like chirping. Vocalizations serve various purposes, including greeting and warning other jaguarundis.

Scent marking is also frequently used by jaguarundis: the animals scratch both the ground and tree branches, rub their heads against objects, urinate and leave their droppings uncovered to advertise their presence to other individuals.

Jaguarundis in the tropics may mate any time of the year, while animals in the northern parts of the species’ range have a distinct mating season, which occurs in the late fall. The female jaguarundi is in estrus (ready to mate) for 3 to 5 days at a time. She will advertise her status to potential mates by making faint cries, scent marking and rolling onto her back.

Gestation lasts for around 70 to 75 days. The female constructs a den in a hollow tree or dense vegetation and gives birth to a litter of 1 to 4 kittens. Jaguarundis are born blind and deaf, and occasionally have spots that fade as the kittens grow to full size.

The mother nurses her kittens for around 6 weeks, at which point they are able to eat solid food.

The jaguarundi is a carnivore and will eat almost anything that it is able to catch. Its diet mainly consists of rodents, small reptiles, amphibians and birds. Occasionally, larger prey such as rabbits, opossums, armadillos and even marmosets are taken.

Like other cat species, the jaguarundi will also consume small amounts of vegetation and arthropods.

The jaguarundi tends to hunt on the ground but has also been observed jumping up to 2 m (6.6 ft.) in order to catch birds. The species competes for prey with other carnivores such as ocelots; hunting on the ground during the day may be an adaptation to reduce competition with nocturnal and/or arboreal (tree-living) rivals.

Is The Jaguarundi Endangered?

The jaguarundi is rated ‘Least Concern’ by the IUCN.

The species has a large distribution range, but the actual size of the population is unknown. Because the jaguarundi is active during the day, it may be appear to be more abundant than it actually is when compared to nocturnal species. The species is protected in many parts of its range.

Although the jaguarundi is not hunted for its skin, it is occasionally caught in traps meant for other animals.  The species is also threatened by habitat loss and habitat fragmentation. This is due to the conversion of land into agricultural and grazing use.

As a known predator of domestic poultry, the jaguarundi is hunted by farmers in some areas.