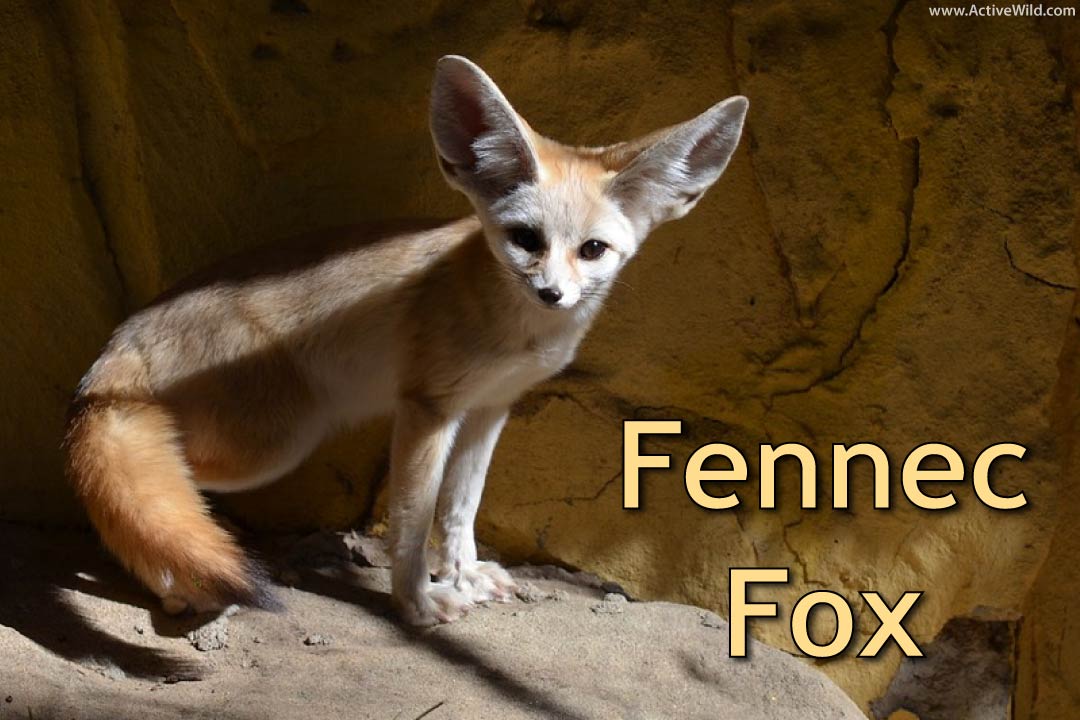 Fennec fox facts, pictures and information. The fennec fox is a well-known species of desert fox. Its distinctive big ears are just one of the species’ many adaptations for living in the desert.

Fennec Fox Facts At A Glance 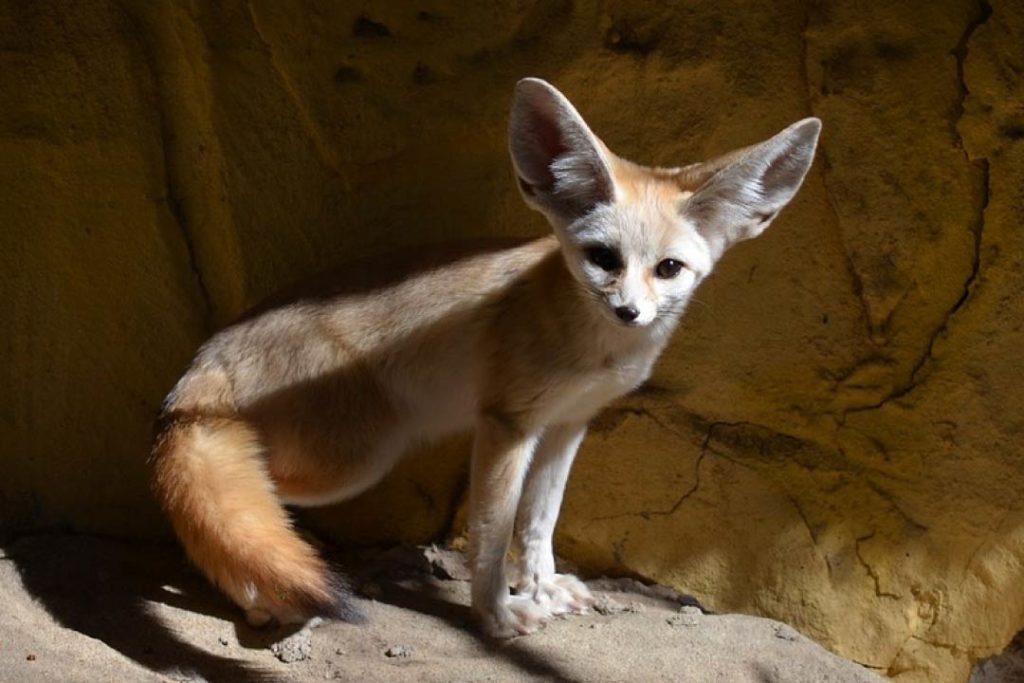 The fennec fox is the world’s smallest canid species. (Canids are members of the dog family, Canidae). It is a true ‘desert fox’, and has a number of adaptations for living in a hot, arid (dry) habitat.

The fennec fox is not just the world’s smallest fox; it’s also the smallest member of the dog family Canidae. This diminutive desert dweller is smaller than a typical house cat.

The fennec fox has a long, bushy tail, a small snout and a typically fox-like ‘triangular’ face.

The species is famous for its distinctive long ears. These can be up to 15 cm (5.9 in) long; quite a size compared to the animal’s relatively small body! In fact, the fennec fox has the largest ears of any fox in relation to body size.

The adult fennec fox’s thick coat is long and silky. It is mostly buff or cream in color.

The fur on the fox’s face, insides of the legs and undersides are white. The tail has a reddish tint and a black tip. Darker facial markings extend from the inner corners of the eyes out towards either side of the snout.

Fennec Fox Adaptations For Living In The Desert

The fennec fox has a number of adaptations for living in the desert. These include:

Where Does The Fennec Fox Live?

The fennec fox is found in arid regions throughout northern Africa, including the Sahara Desert. Its range stretches from Mauritania, Western Sahara and Morocco in the west to the northern parts of the Sinai Peninsula in the east.

The species may be present in the Arabian Peninsula. However, sightings from the region have not been verified and may have been of a different species.

The fennec fox is able to tolerate higher temperatures and drier conditions than other fox species. It occurs almost exclusively in desert and semi-desert habitats with sandy soils.

Desert grasses and/or scrub vegetation are often found in areas occupied by fennec foxes. The species prefers stable sand dunes; these are more suitable for burrowing.

The fennec lives in family groups which can contain up to 10 individuals. The groups consist of a mated pair and their offspring. The species is highly social and playful – even adult fennecs often engage in play.

Each family group has its own territory. The foxes mark the boundary of their territory with urine and droppings.

The size of the foxes’ den is dependent on the type of sand in the territory. In areas of loose sand, burrows are more likely to be small and simple.

In areas in which the soil is compacted, dens may be larger and more complex, having up to 15 entrances and covering areas of approximately 120 m2 (1,300 sq. ft.).

The fennec fox is a vocal species. It communicates using a wide range of sounds, including barking, chattering, snarling, whimpering, wailing, growling, shrieking and howling.

Visual and tactile (touch) communication is also common among this social species.

The fennec fox typically mates for life. Mating takes place between January and February, with litters being born between March and April. (The species’ gestation period is around 50 days.)

The male is fiercely protective of its mate while she is pregnant, and will bring her food both during pregnancy and while she is feeding their young.

A litter usually consists of 1 to 4 kits. Newborn fennec foxes weigh around 50 g (1.8 oz.). Their eyes are closed and their ears are folded for around 10 days after their birth.

Both parents look after the kits. Continuous care is given for 2 weeks, and weaning takes place when the kits are around 2 to 3 months of age.

What Do Fennec Foxes Eat?

The fennec fox is an omnivore. Its prey includes a wide range of animals, including small rodents, snakes, rabbits, birds, lizards and insects such as grasshoppers and locusts.

Despite being a social animal, the fennec fox typically hunts alone. Those ears aren’t just for keeping cool; the fennec fox also has extremely sensitive hearing, and is capable of detecting even prey that is underground.

The fennec fox obtains almost all of the water it needs from its food, but will drink when water is available.

The fennec fox’s main predators are various species of eagle owl. The species may also be targeted by jackals, caracals, hyenas and domestic dogs.

Is The Fennec Fox Endangered?

The fennec fox is rated ‘Least Concern’ by the IUCN (the International Union for Conservation of Nature).

The species is widespread, and relatively common throughout the Sahara. There are no known threats with the potential to affect the species across its whole range.

In some areas, the animal is both hunted for its pelts and collected for the pet trade. The construction of new roads and human settlements has a negative impact on the animal’s habitat.

The fennec fox’s name comes from the Berber word ‘fanak’, which means fox. (Berbers are a group of people indigenous to North Africa.)

The first part of the fennec fox’s scientific name Vulpes zerda tells us that the species is a member of the genus Vulpes; the group to which all true foxes belong. (Vulpes is part of the wider dog family.)

The second part of the species’ scientific name is derived from the Greek word ‘xeros’ (dry). It refers to the habitat in which the fox is typically found.

In the past the fennec fox’s membership in the genus Vulpes has been disputed. This is because there are several differences between the fennec fox and other foxes. The fennec fox lacks musk glands, has fewer chromosome pairs and, unlike most foxes, lives in a pack. For this reason, the animal has previously been assigned to its own genus, Fennecus.

The most recent research suggests that the fennec fox is indeed a ‘true’ fox.

Want to know more about words such as ‘family’, ‘species’ and ‘genus’? Check out our guide to animal classification.