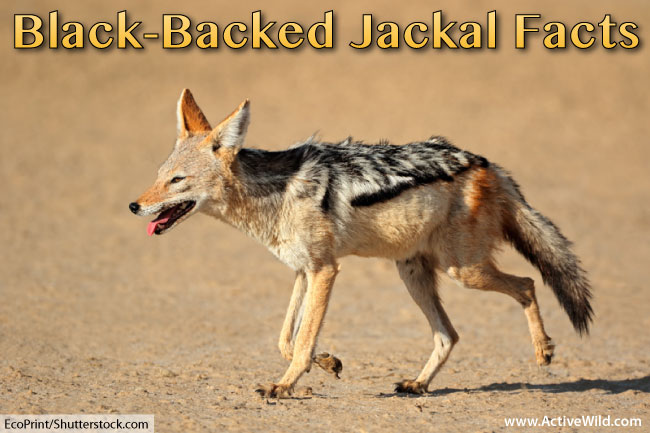 Black-backed Facts At A Glance

The black-backed jackal is an African canid (a member of the dog family Canidae). It has remained virtually unchanged since the Pleistocene Epoch that ended around 11,700 years ago.

The species’ success is largely down to its adaptability; it is a generalist species, and isn’t reliant on any one food source or habitat.

The black-backed jackal is a medium-sized canid with a slender body, long legs, and a long, bushy tail. Its muzzle is pointed, and it has large, upright ears.

The black-backed jackal’s base color is reddish brown. Covering its back from the neck and shoulders to the base of the tail is a large patch of black and silver fur. This dark ‘saddle’ is what gives the species its English name.

Watch the video below to see a black-backed jackal seen on safari in South Africa:

There are two subspecies of black-backed jackal.

*** Confused by terms such as ‘subspecies’? Check out this article: Animal Classification! ***

There are two separate populations of black-backed jackal. The Cape jackal subspecies is found in a number of Southern African countries, including South Africa, Botswana, Namibia and Zimbabwe.

The two populations are separated by a distance of around 900km.

Can you find these countries on the map below?

The distribution of the black-backed jackal is similar to that of other mammals endemic to Africa that are adapted to dry conditions, including the bat-eared fox (Otocyon megalotis) and the aardwolf (Proteles cristatus).

The black-backed jackal is able to tolerate arid (dry) environments, having kidneys that have adapted to cope with a low water intake. The species is found in deserts, as well as a wide variety of other habitats, including: open savannah, grassland, coastal desert, open woodland, alpine areas and farmland.

The black-backed jackal prefers open areas, and tends to avoid areas with a dense vegetation cover, possibly because of a higher predation risk.

Black-backed jackals have been recorded at a wide range of elevations, from the sea level up to altitudes of over 3,000m (9,842ft).

The black-backed jackal typically lives in pairs or in small family groups consisting of a mated pair and their offspring. Each family group tends to have a strict dominance hierarchy, with the breeding pair at the top. Mated pairs from strong bonds, sometimes staying together for life.

Mating takes place between late May and August. After a gestation period (the length of time the female is pregnant) of around 60 – 65 days, the female gives birth to a litter of 1 to 9 pups in an underground burrow. This usually occurs sometime between July and October.

The pups are blind for the first 8 to 10 days. They remain in the den being tended by their mother for 3 weeks. The father and any remaining older siblings provide the mother and cubs with food. The pubs begin to make their first forays outside then den after three weeks.

The pups are weaned at 8 to 9 weeks of age. Once weaned, they are fed on regurgitated food until ready to begin hunting themselves. This usually occurs at around 6 months of age.

After a year some pups leave to establish their own territories, while others stay to help their parents in raising the next generation. These non-breeding members of the family group help by feeding, grooming and playing with the pups.

The black-backed jackal has a complex communication system that consists of scent marking, vocalizations and body language.

A highly vocal species, the black-backed jackal’s various cries are especially frequent in late afternoons and evenings, as well as during the peak mating season in June and July.

Vocal signals include yelping, yelling, whining, growling, woofing and cackling. Vocalizations are used both to communicate with other members of a family group and to deter intruders.

Mated pairs mark the boundaries of their territory with urine and droppings.

What Do Black-backed Jackals Eat?

The black-backed jackal is an opportunistic omnivore that will eat almost anything it comes across. It is both a hunter and a scavenger, and stores any surplus food it collects in caches.

Typically, the black-backed jackal forages either alone or in pairs. When hunting small animals, the jackal will silently stalk its prey. When it is close enough, the jackal will pounce in a typically dog-like fashion, with its body curved and its forepaws held close to its snout.

Jackals may also hunt cooperatively when targeting larger prey such as antelopes. The jackals will pursue a weak individual, repeatedly biting its legs, loins and throat. This continues until the animal is exhausted, at which point it is brought down by the pack.

Is The Black-backed Jackal Endangered?

The black-backed jackal is rated as ‘Least Concern’ by the IUCN.

The species is widespread throughout its range. Human activity seems to have little effect on the population, even though black-backed jackals are actively hunted and killed as predators of livestock and carriers of rabies.

We hope that you enjoyed finding out about this adaptable African species. Discover more amazing animals in the related pages below: