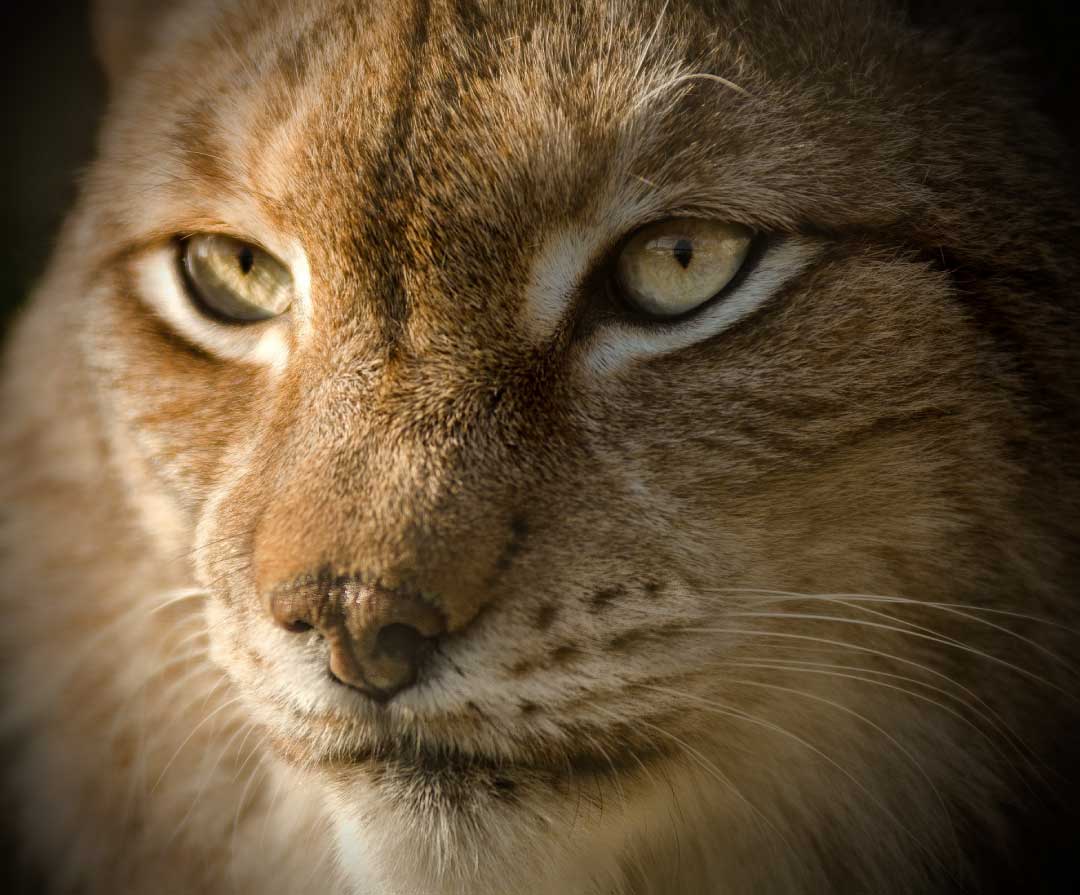 The Eurasian lynx is a large wild cat found across northern Europe and in parts of Asia. Due to its nocturnal lifestyle and liking for forest habitats it is seldom seen by humans.

Let’s find out more about this beautiful, but deadly, predator…

Eurasian Lynx Facts At A Glance

The Eurasian lynx is a medium-large wild cat. It is the largest of the four lynx species and the third-largest land predator in Europe (after the brown bear and the Eurasian grey wolf).

This powerful felid is around three times the size – and six times the weight – of a typical domestic cat.

A felid is a member Felidae, the cat family. You can see a list of every species of wild cat on this page: Wild Cats List with Pictures & Facts

With its tufted ears, long legs, large paws and a short (‘bobbed’) tail, the Eurasian lynx is unmistakably a member of the genus lynx.

The other three lynxes are the Canadian lynx and the bobcat (both found in North America), and the endangered Iberian lynx, found in Spain.

Reaching over twice the weight of its North American cousins, the Eurasian lynx is able to overcome prey as large as a red deer or reindeer (although it is the young of these species that are usually targeted).

The Eurasian lynx has the typical athletic build of a wild cat. It has long, powerful legs and large paws. Its tail is short (‘bobbed’) and has a distinctive black tip.

The texture and color of the lynx’s coat varies seasonally. In the winter, the fur is long and thick, and silver / yellow-gray in color. In the summer, the coat is shorter and typically reddish or brown.

The underside, neck, chin and the inner legs remain whitish throughout the year.

During the winter the lynx’s long cheek hair grows to an almost mane-like facial ruff. The tips of the animal’s large triangular ears end in black tufts.

Male Eurasian lynxes are larger and more powerfully-built than females.

The lynx’s large, furry paws are webbed for walking in snow. Although the lynx is much bigger and heavier than the European wildcat, these ‘natural snowshoes’ prevent it from sinking as deeply into snow as the smaller animal.

Distribution: Where Does The Eurasian Lynx Live? 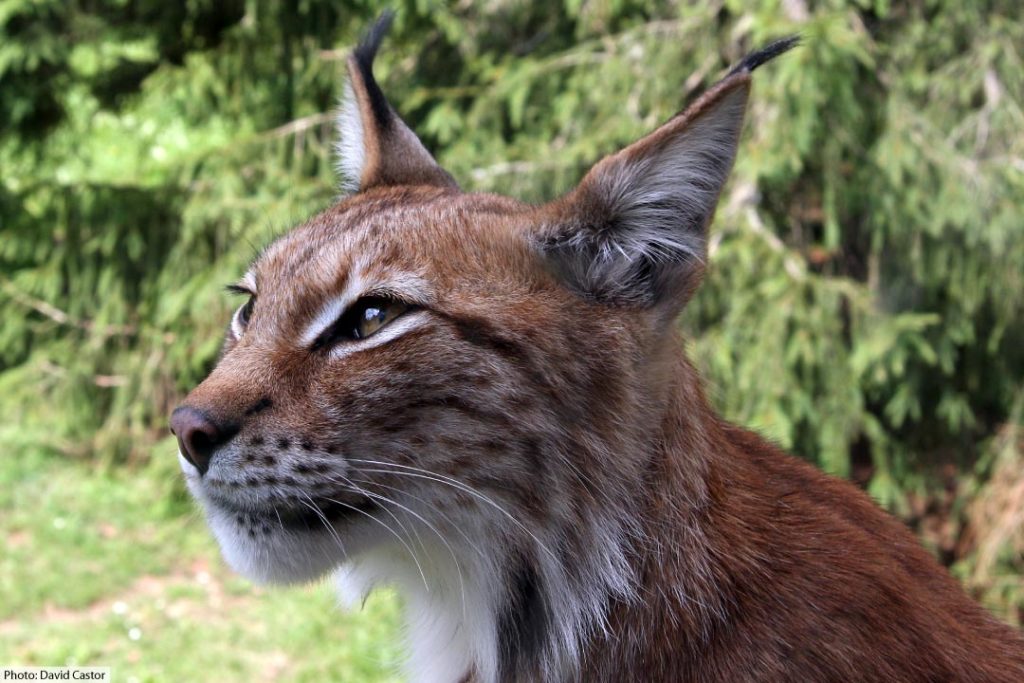 The Eurasian lynx is one of the most widely-distributed of all of the world’s wild cat species. The species’ large range stretches from Western Europe to the easternmost parts of Russia, and south to Central Asia and the Tibetan Plateau.

Although the lynx’s range is large, the subpopulations found in regions such as Western Europe and Central Asia tend to be isolated and small.

The Cat Specialist Group of the IUCN (International Union for Conservation of Nature) currently recognizes six subspecies (types) of Eurasian lynx. The table below shows each subspecies’ English name, scientific name, and the region in which it is found.

The Eurasian lynx is able to live in a wide range of habitats and climates. The species is mainly associated with forests.

In Central Asia, the Eurasian lynx also inhabits open areas such as rocky hills and mountains in desert regions.

The lynx is found at altitudes of up to 5,500 m (18,000 ft.). In the more mountainous parts of its range, the Eurasian lynx follows the movements of its prey animals, moving to lower altitudes during the winter.

The Eurasian lynx is solitary and highly secretive. It has a mainly nocturnal lifestyle and as a result is rarely seen. During the day, the lynx sleeps a concealed place such as a dense thicket of tall grass or in a tree.

Occasionally the Eurasian lynx will be active during the day. This is more likely during the mating season or when there are young to feed.

The lynx is known to travel 20 km (12 miles) in a single night, although a distance of 10 km (6 miles) is more usual. Lynxes are territorial, regularly patrolling and scent marking the boundaries of their territories.

The home range of the male often contains those of 1 or 2 females.

The Eurasian lynx is not particularly vocal outside of the mating season. The sounds it does produce include mews, hisses, growls and purrs.

Both sexes mark their home ranges with gland secretions and scratching, as well as with urine and droppings.

The species spends most of its time on the ground, but is also capable of swimming and climbing.

The mating season of the Eurasian lynx occurs between January and April. The female is receptive for a period of up to seven days and mates with only one male during the season. The male will often have multiple mates.

The gestation period lasts for 67 – 74 days. The female gives birth to a litter of 1 to 4 kittens in a secluded den that is often lined with materials such as dry grass, feathers and deer hair.

The kittens begin to take solid food at around 6 weeks of age. They are fully weaned after around 5 months and become fully independent at around 10 months of age.

What Do Eurasian Lynxes Eat?

The Eurasian lynx is a carnivore (meat-eater). Ungulates (hooved mammals such as deer) form the bulk of its prey.

The lynx prefers smaller species or the fawns of larger species, but is capable of taking down prey animals up to four times its size.

The lynx will also eat smaller animals, such as wild pigs, beavers, hares, foxes, marmots and birds. It will also take domestic animals such as sheep and goats.

Hares and birds are important prey animals in drier and less forested habitats.

The main hunting method employed by the Eurasian lynx is a silent approach followed by an explosive run and final pounce. It will also ambush prey when the chance arrives.

The lynx is not suited to a prolonged chase. It will often break off from a chase if the pounce and initial short chase is unsuccessful.

A Eurasian lynx needs between 1 and 1.5 kg (2.2 and 3.3 lb.) of meat per day. A large kill can provide up to a fortnight’s food, and will be hidden under leaves or snow for the cat to return to.

The Eurasian lynx is relatively large and well-armed, and has few predators of its own. Its biggest natural threat comes in the shape of wolves. A lynx will attempt to escape from a pack of wolves by climbing up a tree.

Depending on the region, tigers and wolverines may also pose a threat, but predation of the lynx by these species is rare.

Is The Eurasian Lynx Endangered?

The Eurasian lynx’s conservation status is ‘Least Concern’. The species is widely distributed and its population is stable throughout most of its range.

A number of smaller subpopulations are either endangered or critically endangered. The main threat to the lynx in these areas is habitat loss / fragmentation. Other threats include a shortage of prey animals and poaching.