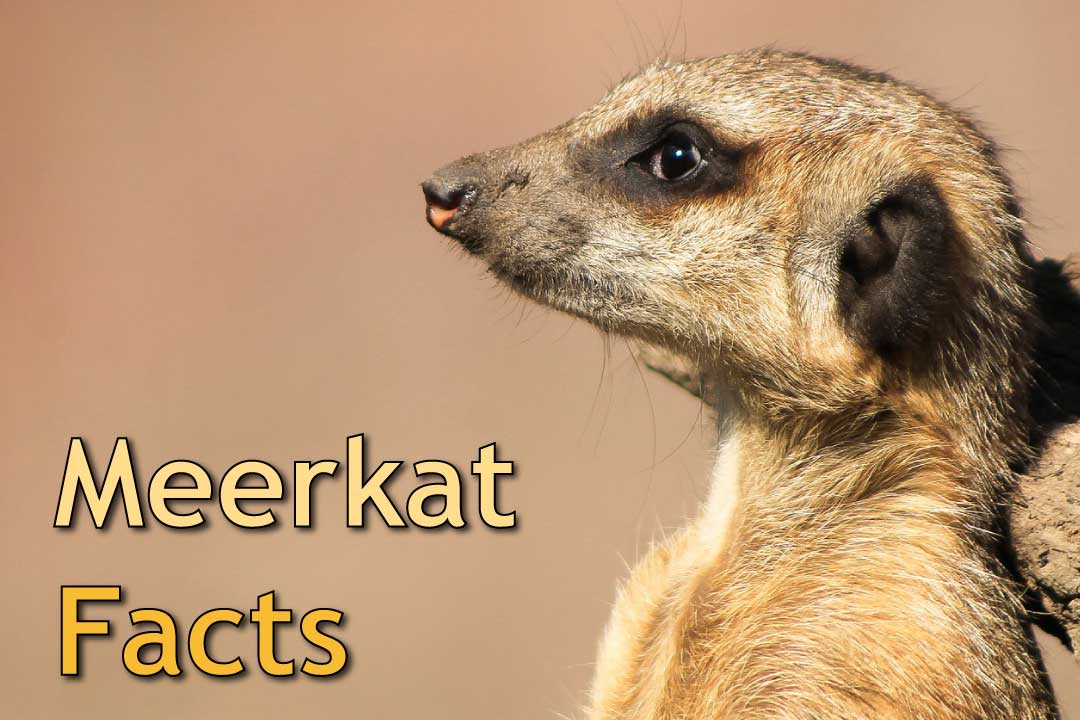 Meerkat facts, pictures and in-depth information for kids and adults.

The meerkat is a carnivorous mammal found in deserts and other dry habitats in southern Africa.

This social animal lives in groups of 20 to 50 individuals. Mongooses forage together, use teamwork to repel predators, and are often seen grooming one another. They will even tend to an injured member of the colony.

While the group is outside, one or more meerkats will act as a sentry, keeping a look out for approaching danger. The sentry will use a different alarm call depending on whether the threat is a land-based or an aerial predator.

Meerkat Facts At A Glance

The meerkat is a mammal in the family Herpestidae (the mongoose family). It is one of 34 mongoose species. Like all mongooses, it is a relatively small animal, with a long body and tail.

The meerkat’s face is long and pointed. Surrounding the eyes are patches of darker-colored fur. The ears are small, dark and crescent-shaped.

This burrowing animal has four toes on each foot and sturdy claws that are adapted for digging (the meerkat does a lot of digging).

The meerkat’s long tail helps it to keep balance when standing on its hind legs, which it does frequently. The tip of the tail is black.

The color of the meerkat’s coat ranges from grizzled gray to sandy-brown with a silver tint. Coat color varies according to location. Meerkats from arid (dry) regions are lighter in color than those found in the southern, less arid, part of the species’ range.

Some individuals have dark horizontal bands running across the back between the shoulders and the base of the tail.

Standing Up & Warming Up

Although the meerkat is often photographed standing on its hind legs, it spends far more time on all fours.

A meerkat will stand on its hind legs to get a better view of its surroundings. It will also adopt this posture when basking in the sun; standing in this way means that the sun’s heat reaches a larger body area. Standing is also used as a threat display to predators or rival meerkat colonies.

On a meerkat’s belly is an area with a sparse covering of fur through which the animal’s black skin can be seen. A meerkat will bask with this area exposed to the sun to warm up faster.

Where Is The Meerkat Found: Range & Distribution

The meerkat is found in western regions of southern Africa. The species’ range (the area in which it is found) includes large parts of South Africa, Botswana and Namibia, and extends to southwest Angola. The upper limit of the range is around 17 degrees south.

The meerkat is found throughout the Kalahari Desert and in most of the Namib Desert.

Meerkat habitat includes grassland, shrubland (areas in which the main vegetation is small, woody plants), savanna (areas with widely-spaced trees) and desert.  The species is not found in forested areas or at high altitudes.

Meerkats prefer areas with firm, hard soil; this is more suitable for the creation of the species’ complex burrow systems.

The meerkat is generally found in areas that are both more arid and more open than those inhabited by other mongooses.

The meerkat is a highly social animal. It lives in colonies that typically consist of around 30 individuals (although groups consisting of between 3 and 50+ meerkats are known).

A colony of meerkats may comprise up to 3 different family groups, each one consisting of a breeding alpha pair and their offspring.

Meerkats are fast, highly-skilled burrowers. They construct large networks of underground burrows. These can have several levels and multiple entrances.

Daytime activities include foraging, basking in the sun and grooming.

Occasionally, meerkats share their burrows with other small mammals, such as the ground squirrel or the yellow mongoose.

Meerkats communicate using a variety of calls, ranging from chirrups to barks.

When a colony is outside, one or more meerkats will stand sentry, ready to give an alarm call to alert the others to potential danger.

This task is most often undertaken by the group’s adult males, who seek out vantage points high up on termite mounds or at the top of bushes. They stand watch for over an hour, making regular peeping noises to let the group know that there is no current danger.

Every member of the group, including females and young adults, takes their turn at sentry duty. Even the alpha male will occasionally do a stint, although often only for periods of 10 minutes or less.

Meerkats use at least 6 alarm calls. The sentry uses a different alarm call depending on whether the predator is a land animal or a bird. The call can also communicate the level of the threat posed.

Meerkats may reproduce any time of the year. Most births occur between August and March.

Typically, only the alpha pair will breed. The other adults in a family group will assist in taking care of the young. This can include sharing food with the pups, teaching them foraging techniques, and guarding them from danger. Non-breeding females will even feed the young with their own milk.

The alpha female will often enforce her position by killing any pups born to other females in the group.

The female gives birth in a burrow after a gestation period of around 11 weeks. She may have up to 3 litters per year, with a litter consisting of 1 to 4 pups (the usual number of pups per litter is 3).

The newborn are helpless and remain inside the burrow for 3 weeks. Their ears open after around 10 days and their eyes after around 10 to 14 days. They are weaned at around 2 months of age.

Meerkat Facts: What Do Meerkats Eat?

The meerkat is an omnivore. Its diet mainly consists of insects. The species also eats other invertebrates including spiders, scorpions, millipedes and centipedes.

The meerkat is immune to some types of venom and is able to feed on the highly venomous scorpions found in the Kalahari Desert.

Meerkats find most of their food by digging in the soil and grass and turning over rocks.

Several birds of prey and carnivorous mammals prey upon meerkats. The species’ predators include martial eagles, tawny eagles and jackals.

Meerkats use defensive threats and mobbing behavior to deter predators. If the colony’s young are threatened, the adults will run over and shield the pups with their own bodies.

If a potential predator strays into a colony’s territory, the meerkats, led by the alpha male, will band together and attack it as one. Predators such as the black-backed jackal and the yellow cobra will be driven from the territory in this way.

Is The Meerkat Endangered?

The meerkat is rated ‘Least Concern’ by the IUCN (International Union for Conservation of Nature).

The species has a wide distribution range, and occurs in several protected areas. Although meerkat population density varies widely from area to area, there are no major threats to the species as a whole.