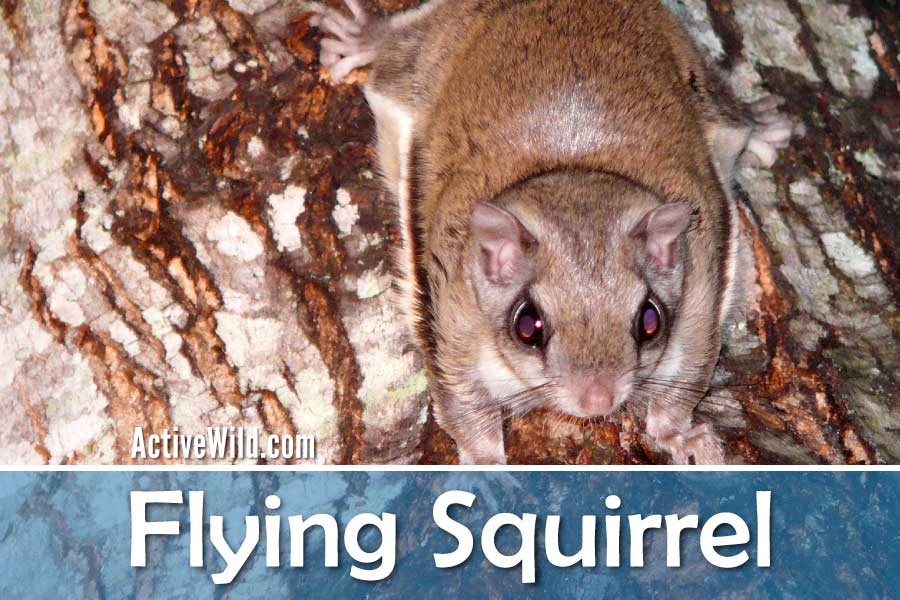 Flying squirrels are true squirrels, but they don’t actually “fly”. Instead these ingenious rodents glide from tree to tree, using a membrane of thick skin stretched between their arms and legs to slow and control their fall.

On this page you’ll find amazing facts on the three flying squirrels found in North America.

If you hike through a forest in North America, there’s a pretty good chance you’ll walk through the territory of a flying squirrel. These extraordinary animals are all around us, but they live high up in the trees and are only active at night; as a result, they’re rarely seen.

These three squirrels are the only living members of the genus Glaucomys, a group otherwise known as the New World Flying Squirrels.

Where Are Flying Squirrels Found In North America?

Northern flying squirrels are found in in Alaska and all parts of Canada, as well as colder and more mountainous parts of the U.S. such as Idaho, Montana, and the Great Lakes region.

The southern flying squirrel lives all over the eastern United States, its range stretching from Minnesota in the north to Texas in the south, and all states east of this line.

Humboldt’s flying squirrel is found in forests along the west coast of North America from southern Canada to southern California.

How Big Are Flying Squirrels?

Although “flying” is a misnomer, “squirrel” is spot on. The North American flying squirrels belong to the squirrel family Sciuridae, alongside the familiar grey and red squirrels. Also in this family are chipmunks, marmots, and prairie dogs.

Like all squirrels, flying squirrels are rodents, which means their front teeth never stop growing. To keep tooth growth under control, the squirrels gnaw on hard foods like nuts and seeds – and the constant growth ensures that the teeth will still be there no matter how much the animal grinds them down!

Instead of true wings, the flying squirrel has a membrane called a patagium that runs from its wrists down to its feet. When the squirrel spreads its limbs, the membrane stretches out like a parachute, slowing its fall and giving it some measure of control over its direction.

Unlike true flying animals, gliding animals are unable to gain height under their own power. Instead, they leap from a tree and use their “wings” to prolong their fall and travel in a controlled manner. For this reason, a gliding animal can’t take off from the ground.

Flying animals are able to flap their wings in order to increase their height; most can therefore take off from the ground. The only living flying animals are birds, bats, and insects. A fourth group, the pterosaurs, lived during the Mesozoic Era.

How Far Can Flying Squirrels “Fly”?

By holding its limbs in different shapes, the squirrel can turn, accelerate, or slow down its glide. It’s amazing adaptations allow a flying squirrel to travel almost 150 feet in a single leap!

You can see how a flying squirrel glides in the videos below:

Inspired by flying squirrels, skydivers in the 1990s created a suit called a wingsuit or “squirrel suit” designed to let a human being experience freeform gliding. The suit has flexible “wings” that extend from wrist to ankles, exactly like the patagium of a flying squirrel.

Squirrel suit designers still haven’t figured out how to land safely, though: near the bottom of the glide, a person in a squirrel suit has to open a parachute to slow their fall, and even then, it takes a lot of practice to operate the suit safely. It will likely be years before someone invents a suit as effective as a flying squirrel’s patagium.

In order to maximize the size of the patagium, flying squirrels have evolved the longest limbs of any squirrel (in proportion to body size). They also have a little spur of cartilage on each wrist that stretches the patagium just a little further.

In addition to the patagium, flying squirrels also have a broad, flat tail, which gives them more lift. The tail can also be an effective brake: by holding it down, the animal slows its glide and softens the landing.

A smaller membrane called the uropatagium runs from the ankles to the base of the tail.

One particularly odd characteristic of the North American flying squirrel is that it glows pink. Under black light (UV light), both northern and southern flying squirrels give off bright pink fluorescence.

This discovery was made by accident in 2017 and only published in 2019, so scientists are still working on figuring out the function of the pinkish glow. But it is probably connected to their nocturnal lifestyle: the fluorescence may help flying squirrels see each other in the dark. Or it might deter predators by mimicking the fluorescence of other animals (many owls, for example, have UV fluorescence).

We barely understand this phenomenon at all – all we can say is that it’s common to all North American flying squirrels and exists only in one other mammal that we know of (the opossum).

Scientists call this pattern “facultative sociality,” meaning each individual can decide whether to be social at a given time.

It’s not entirely clear what pushes a flying squirrel to join or leave a social group.

Female flying squirrels are less social when they have young kits at the nest, which makes sense: if you have your own babies to feed, you might be less willing to share your territory and its food resources with others.

In general, a lack of territoriality in males often indicates a complex mating system in which both males and females have multiple partners (called “polygynandry”). But so far no one has figured out the mating system of North American flying squirrels, so we can’t be sure if that’s the case here.

Although the exact mating system is unknown, reports suggest that southern flying squirrels mate twice a year, whereas northern flying squirrels mate only once. This is probably connected to regional climate: for the northern species, having young would be extremely risky during the harsh winter months. Further south, the conditions are suitable for raising young all year round.

Flying squirrels are major seed dispersers. Because they travel such large distances, they leave droppings over a wide area, and those droppings often contain seeds or spores that will grow into the next generation of forest plants.

Flying squirrels are omnivorous. Like other squirrels, they eat nuts and acorns, but they also include a high proportion of fungi in their diet. Flying squirrels will also eat small amounts of meat, especially scavenged carcasses of birds or small mammals.

Flying squirrels need large areas to roam in search of food – that’s why they evolved gliding in the first place. Unfortunately, this makes them vulnerable to deforestation and habitat fragmentation.

A flying squirrel population can’t survive if the trees are cut down, or if the forest is broken up into small, isolated chunks with no suitable corridors between them.

Because they’re so cute, flying squirrels are sometimes illegally trapped and sold on the international pet market. The animals are not in danger of extinction, but they are protected by law because of their ecological importance. In addition–like all wild animals–they make terrible pets.

Other Mammals That Glide

Few mammals are capable of gliding, and those that have acquired this skill are not closely related.

Aside from flying squirrels, the best-known gliding mammals are sugar gliders. These small marsupials are found in Australia.

A handful of other Australian marsupials have also evolved the ability to glide, as have the flying lemurs, or colugos, of Madagascar, and the Anomalures of Africa. The latter group, despite being known as scaly-tailed flying squirrels, are not true squirrels.

Because the gliding mammals are so spread out on the tree of life, we know that gliding has evolved multiple times independently. This can be seen as proof of the effectiveness of gliding as an adaptation.

Research suggests that gliding tends to evolve when an animal (1) lives in trees, (2) has a relatively low-quality diet that lacks energy-rich food, and (3) needs to cover large distances to find food.

Because of their relatively energy-poor diet, these animals have to be very careful how they get around. Rather than making multiple tree-to-tree leaps, or climbing down one tree and climbing up another, gliders can simply spread their arms and cover a large distance… a much more energy-efficient way of getting around!

What about flight? Did it evolve from gliding? For a long time, scientists thought so. They assumed gliders and fliers should be closely related. It makes sense intuitively: first you evolve gliding, then some subset of animals goes one better and evolves true flight.

Under that assumption, it was believed that bats were close relatives of some gliding mammals. But DNA evidence shows that’s probably not true.

Bats’ closest genetic relatives are, of all things, horses and whales. So, the ancestors of bats may well have been gliders, but those ancestors are long since extinct, and no gliding mammal today is a close cousin of the bats.