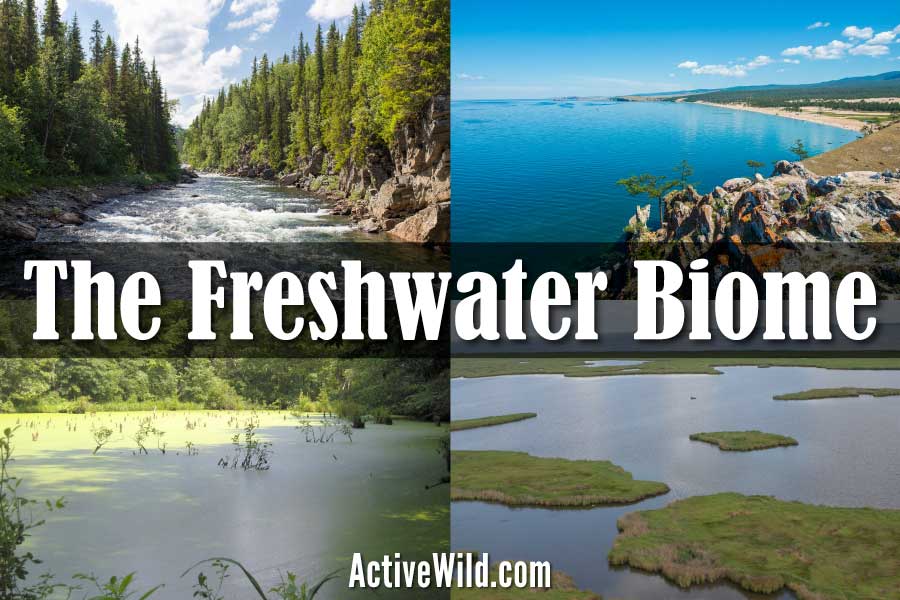 Freshwater habitats such as rivers, lakes and wetlands are extremely important for life on Earth. They provide a home for countless animal and plant species and supply us with water and food. This page contains freshwater biome facts together with information on the main freshwater habitats…

Find out more about biomes on these pages:

What Is The Freshwater Biome?

The freshwater biome is the community of plants and animals found in freshwater habitats throughout the world.

Freshwater habitats include streams, rivers, lakes, ponds, swamps, marshes, and bogs. These habitats are essential for life on Earth, providing not just drinking water but also a home to countless animals and plants.

In total, over 100,000 species of plant and animals live in freshwater habitats.

Freshwater makes up just 3% of the water on earth, of which two-thirds is frozen in glaciers or otherwise unavailable.

The freshwater biome is highly biodiverse. Animals such as worms, mollusks, crayfish, and insect larvae burrow into the mud found at the bottom of lakes and creeks. Aquatic vegetation provides a home to amphibians and aquatic insects (apart from a small number of possible exceptions, all amphibians are reliant on freshwater).

Larger animals, including birds, mammals and reptiles, live in the vegetation that borders expanses of freshwater. Fish are present in many freshwater ecosystems. Wetlands such as swamps and marshes are home to an array of specialized plants.

Freshwater can be defined as being water with a low salt content, or salinity. A common definition of freshwater is water whose dissolved salt content is less than 0.5 parts per thousand (0.05%).

The water in freshwater habitats is supplied by the precipitation (rain, hail, or snow) of evaporated seawater, or from melted snow and ice from high ground.

Freshwater habitats include rivers and streams, lakes and ponds, and wetlands such as marshes, swamps and bogs.

Some of the best-known habitats of the freshwater biome are rivers and streams.

Rivers and streams are flowing, or lotic, freshwater ecosystems, whereas lakes and ponds are still water, or lentic ecosystems.

Rivers and streams come in all different shapes and sizes, varying not only in length but also in depth, width, rate of flow, and volume of water carried. These characteristics are largely determined by the geography of the area, including the shape of the land and the type of rock over which the river flows.

Rivers and streams are formed either by a spring (groundwater emerging from under the ground) or by melting snow and ice.

This flowing water forms small creeks and streams, which join with other watercourses to form larger rivers.

All rivers eventually flow into the ocean, although their names may change as they merge with other rivers along the way.

The Roe River, in Montana, US is recognized as the world’s shortest river. It measures only 201 feet (61 m) in length.

Most of the water flowing in rivers and streams comes from the surrounding land, after originally falling as precipitation. The area whose water drains into a river is known as a catchment area, or watershed.

Not all rainwater ends up in rivers and streams. Some water evaporates and some of it soaks into the ground to recharge groundwater aquifers (layers of water-containing rock).

Some of the water from these groundwater aquifers will also eventually end up being a part of a river or stream. At a certain depth below the earth’s surface, the ground becomes saturated with water; this point is known as the water table. If a riverbank cuts into this saturated ground, as most rivers do, then the water will seep out of the ground into the river.

Lakes and ponds are lentic systems. Differing widely in size, depth and the altitude at which they are found, these inland water systems exist in many parts of the world and support to a vast array of fauna and flora.

Many lakes were formed by glaciers between 12,000 and 1.8 million years ago, during the last ice age. The moving ice left hollows that subsequently filled with water.

Other natural ways in which lakes are formed include: parts of rivers becoming cut off from the main flow; volcano craters filling with water; and meteorite strikes that form craters in which water settles.

In addition, many lakes and ponds are man-made. These artificial bodies of water are created for a variety of reasons, including reservoirs, fish farming, sport fishing, recreation, or simply for aesthetic reasons. Artificial lakes and ponds can support a wide variety of wildlife, often in urban areas in which biodiversity is low.

The largest lake in the world in terms of volume is Lake Baikal, which is located in southern Siberia, Russia.

Lake Baikal contains around 5,521 cubic miles of water (23,013 cubic kilometers). To put this into context, this volume is approximately equivalent to the combined volume of all five of the North American Great Lakes.

Lake Baikal accounts for approximately 20% of all of Earth’s fresh surface water. This vast expanse of freshwater was formed by tectonic movement.

Thermal stratification (different temperature layers) can occur in lakes in temperate regions. In summer, water near the surface becomes much warmer than the deeper water. This can lead to the deeper water becoming oxygen-depleted.

During the spring and fall, wind turbulence is higher, which leads to constant mixing of the water and a lessening of the thermal stratification effect.

In the winter, thermal stratification can occur again, particularly in areas that have very cold winter temperatures. In those areas, a layer of cold-water will form over a layer of warm water. This is because water density is highest at 4°C and the colder, less dense water will remain at the surface.

This effect explains why some lakes are covered by a layer of ice in the winter months.

Lakes and ponds are found at a variety of elevations and latitudes; as a result, several thermal stratification patterns are possible.

Freshwater wetlands are areas that are covered by freshwater for all or most of the year. Wetland soil is waterlogged and gives rise to a characteristic range of aquatic vegetation.

The water that supplies wetlands is either floodwater from rivers, lakes, and streams, or groundwater that seeps up through the bedrock underneath the soil.

There are four main types of wetlands: marshes, swamps, bogs and fens.

Marshes are dominated by herbaceous plant species that are adapted to fluctuating water levels. These areas are nutrient-rich, and flora and fauna are abundant.

Swamps are dominated by woody plants and trees that have adapted to living in standing water or soil that is constantly saturated with water.

A large number of swamps and marshes have been destroyed by turning their nutrient-rich soil into farmland.

Unlike other wetland ecosystems, bogs are low in nutrients and support a relatively small amount of life. The dominant plants in bogs are sphagnum mosses and heathers. The ground in bogs consists of peat – the remains of thousands of years’ worth of sphagnum moss growth. The water in bogs is typically supplied by precipitation, and usually acidic.

Fens are waterlogged areas typically found in lowland areas. They are fed by underground and surface water. Unlike bogs, the water in fens is either neutral or alkaline.

Some wetlands in the northern hemisphere are created by beavers. By building their characteristic dams, beavers create a wetland habitat that provides them with a safe place in which to forage.

Freshwater is an important resource, not only for humans, but also for the animals and plants that rely on these ecosystems to survive.

In total, over 100,000 species of plant and animals live in freshwater habitats.

Freshwater habitats provide us with the majority of the water that we use for drinking, bathing, washing, and irrigation. In addition, we feed on many freshwater plants and animals.

The freshwater biome supplies us with energy, and is used for transport, as a means of preventing both erosion and flooding, and the disposal of waste.

Fewer than 70 of the world’s 177 longest rivers remain free of man-made obstructions such as dams.

Over the last 50 years, the frequency of severe flooding and drought has increased, partly as a result of damage to freshwater habitats.

Find out more about biomes on these pages: