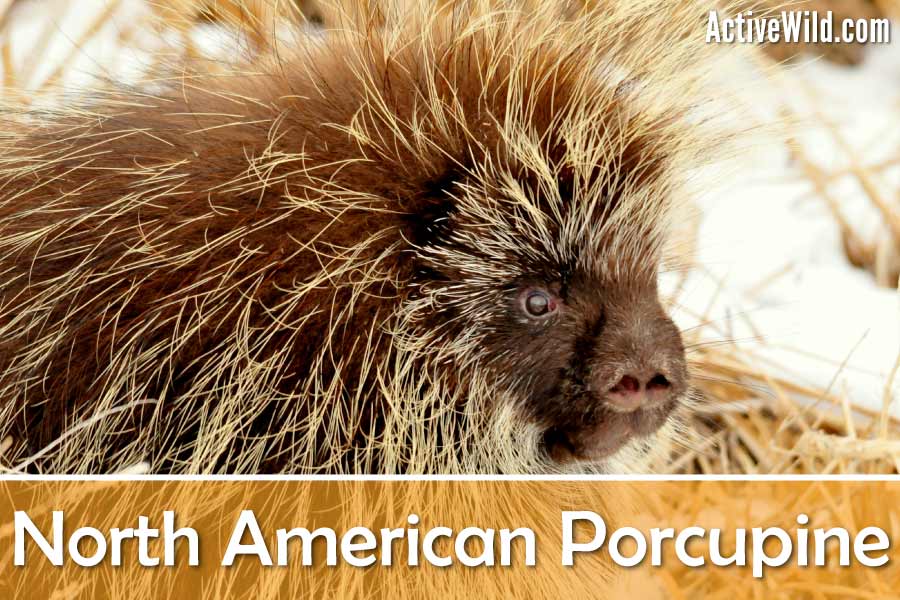 You can find out more about porcupines on this page: Porcupine Facts

The North American porcupine’s most distinctive feature is its spiny coat, which consists of around 30,000 sharp quills. Its head is relatively small, its legs are stocky, and it has strong, curved claws on all four feet.

The quilled coat is dark brown to grey in color and has a grizzled appearance due to the bands of black and white on the quills. 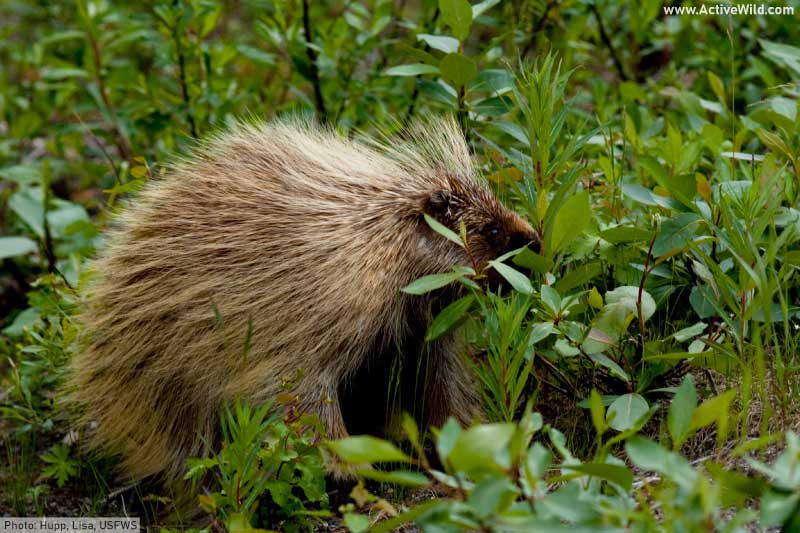 The white patches in the quills can be easily seen at night. This is an adaptation to warn other animals that the porcupine is well protected and won’t be an easy meal!

Being a rodent, the North American porcupine has large incisor teeth, with which it gnaws its food. A characteristic of rodents is that their incisor teeth never stop growing, meaning that they can gnaw on tough plant material their whole lives with no fear that their teeth will eventually wear down. 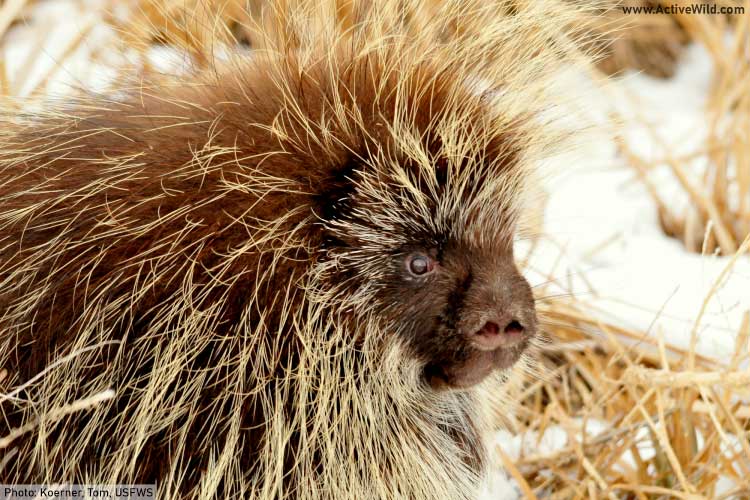 The North American porcupine is mostly arboreal (tree-dwelling), spending much of its life foraging for food in the trees.

(If seen at all during the day, the North American porcupine is often only visible as a dark ball high up in the branches).

In some regions, however, the porcupine spends as much, or even more, time on the ground.

Apart from the strong, curved claws on its feet, the North American porcupine has few specialized adaptations to enable it to grasp branches or move about in the tree tops.

In fact, North American porcupines regularly fall out of the trees, and this can lead to death. In one museum collection of porcupine skeletons, a researcher recorded that 30 per cent of the individuals had evidence of fractured bones; no doubt sustained from falling out of trees.

Currently, seven different subspecies of the North American porcupine are recognized. Each subspecies occurs in a different locality, and shows minor differences in size, weight and coloration.

The North American porcupine is a member of the family Erethizontidae, a diverse group of rodents otherwise known as “New World porcupines”. The family currently consists of around 18 species.

The New World porcupines first appeared on the fossil record about 30 million years ago.

Paleontologists estimate that the North American porcupine crossed from South To North America, via the Isthmus of Panama, during the late Tertiary period, approximately 3 million years ago.

The earliest North American porcupine fossil was found at a site in central Mexico, and dates to 2.5 million years ago.

All New World porcupines are arboreal and have significant adaptations that help them to move around in the trees; these include prehensile tails for gripping branches, and a fleshy pad on each hind foot used to grip.

The New World porcupines are more closely related to other New World families of rodents, such as guinea pigs, chinchillas, agoutis and coypus, than they are to the Old World porcupine species of Africa, southern Europe, India and southeast Asia.

The North American porcupine is found from northern Mexico to Alaska.

The porcupine inhabits a diverse range of habitats, including deciduous forests, coniferous forests, woodlands, scrublands, grasslands, and even tundra.

What Do North American Porcupines Eat?

The North American porcupine is strictly herbivorous and depends on trees for its food. It eats tender twigs, shoots, buds, bark, seeds and berries from a variety of trees.

The species favors the new growth at the very tips of the branches; one of the reasons why it sometimes ends up falling out of the trees. In winter, the porcupine mostly eats bark and the needles of coniferous trees.

The North American porcupine can do substantial damage to trees by eating their bark, a behavior that can bring the species into conflict with humans.

The North American porcupine is nocturnal, foraging in the trees during the darkness of night. It will either return to a den on the ground during the daytime or remain in the tree to rest.

Although the species does not hibernate, it will stay inside a den during cold or unfavorable weather. Dens are made in hollow logs, caves, tree stumps, or disused burrows. 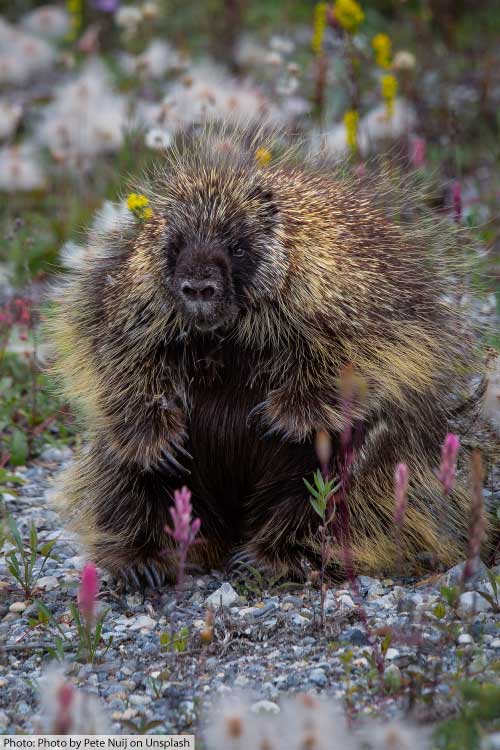 The North American porcupine’s coat consists of three distinct layers; an inner, woolly layer is closest to the skin, followed by a layer of longer guard hairs. The outermost layer comprises around 30,000 sharp quills.

The quills cover the porcupine’s body and tail. They are hollow and provide insulation against the cold. Being hollow, the quills also provide buoyancy, which enables a porcupine to swim well.

The North American porcupine uses its quills as defense against predators. If threatened it will turn its back to the predator and raise its quills.

Although (contrary to popular belief) a porcupine cannot physically shoot its quills from its body, it will flick its quilled tail towards a predator’s face.

The quills are barbed and easily detached, meaning that the would-be predator can quite easily find itself with either a face-full or paw-full of quills.

This is highly painful and potentially dangerous for the predator; the embedded quills can work themselves further into the flesh and become infected. Some predators are known to have died from wounds caused by a porcupine’s quills.

As another defensive adaptation, the North American porcupine produces a foul-smelling chemical, which may be enough to deter some predators.

Another defensive option for the porcupine is to simply escape to the safety of a tree.

In addition, predatory birds such as eagles and owls prey on porcupines.

Predators can get through the porcupine’s defenses by flipping the rodent onto its back, thereby exposing its soft belly, which is not protected with quills.

The North American porcupine is solitary for most of its life, only seeking the company of other porcupines in the fall for the purpose of mating.

A receptive female advertises her availability by secreting a special scent. Males respond and will join her in the tree where she is perched. Here they compete for dominance. Mating itself takes place on the ground.

The gestation period is about seven months, after which a single infant, known as a porcupette, is born in the female’s den. Its quills are soft at birth, but harden within a few days. It is cared for by its mother, who soon teaches it to climb trees and to forage on its own.

The conservation status of the North American porcupine is Least Concern. However, there are regions in which the species’ population has declined.

In Maryland, for example, the species is considered to be in need of conservation, while in Mexico it is listed as an endangered species.

North American porcupines are slow and rather lumbering; they suffer mortality from falling out of trees, and are often killed on roads as they move around in the night.

In addition, they are hunted in some places, and chased away in others. They damage trees in plantations and in people’s gardens, and often gnaw on garden sheds, wooden porches, gardening tools, and even old boots. Even though they are docile and gentle creatures, they can only suffer population declines as humans continue to encroach into their habitats.