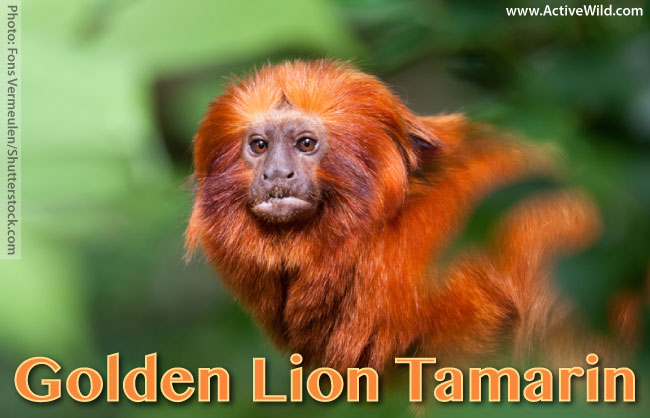 Golden lion tamarin facts for kids and adults. Discover this beautiful golden-red monkey whose natural habitat has been greatly reduced due to deforestation. 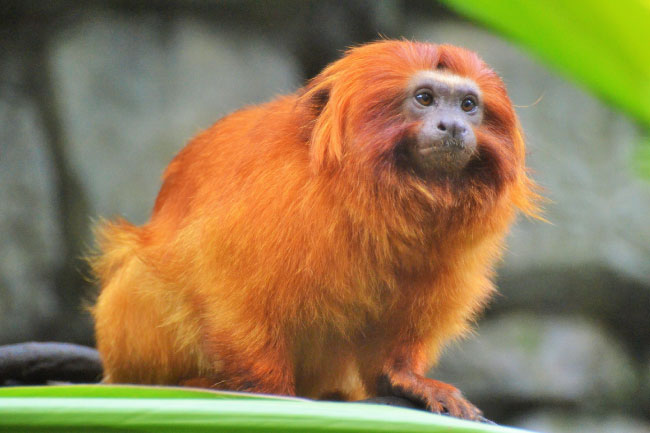 The golden lion tamarin, also known as the golden marmoset, is a species of New World monkey. It is a small animal with striking reddish-golden hair. Its face, feet and hands are hairless, and dark pink or black in color.

(The term ‘New World’ means the continents of North and South America combined.)

The golden lion tamarin’s long fingers are equipped with claw-like nails, which are useful both for climbing trees and for foraging for food.

The species gets its name from the long hair surrounding its face, which resembles the mane of a lion.

It is thought that the golden hue of the golden lion tamarin’s hair is caused both by sun exposure, and the presence of carotenoids in the monkey’s diet.

(Carotenoids are a group of yellow, orange and red pigments often found in plants, like carrots and ripe tomatoes.)

How Big Is A Golden Lion Tamarin?

Golden lion tamarins weigh from 400 to 822 g (14 to 29 oz.). There are practically no differences between males and females.

The golden lion tamarin lives up to 15 years in the wild, and up to 20 years in captivity.

Where Does the Golden Lion Tamarin Live?

The golden lion tamarin inhabits the Atlantic Coastal Forest of southeastern Brazil. The monkey’s lowland seasonal rainforest habitat has been substantially reduced due to deforestation.

Over 85% of the Atlantic Forest has been destroyed to make way for farms, towns and cities. The Southeast Region of Brazil is one of the most heavily urbanized areas of the country.

As a result of deforestation, the golden lion tamarin’s habitat today is only a fraction of what it once was. 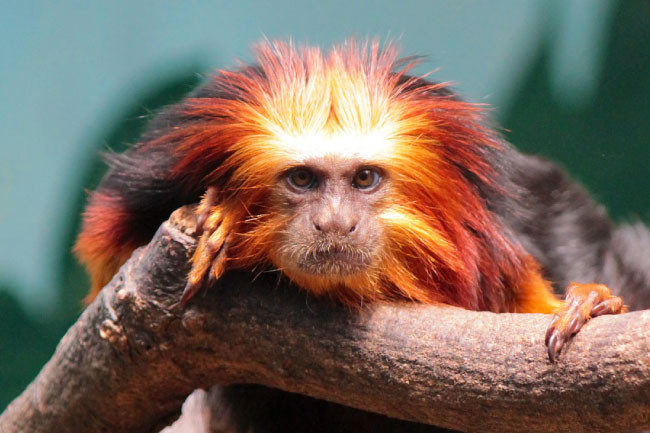 The golden lion tamarin is arboreal (i.e. it lives in the trees). It leaps, climbs and runs through the treetops, roaming the forest canopy in search of food.

The golden lion tamarin sleeps in tree hollows. It makes its nest high off the ground to avoid predators, preferring dens that are 11 to 15 m (36 to 49 ft.) off the ground. It generally does not sleep in the same den two nights in a row.

Predators of the golden lion tamarin include birds of prey, cats, and large snakes.

The golden lion tamarin eats fruits, plant sap, bird eggs, insects and small vertebrates such as frogs and lizards. It is very skilled at using its long fingers and claw-like nails to draw out its food from holes and crevices.

The golden lion tamarin is a social animal. It lives in family groups called Troops. Troops are usually composed of 2-8 individuals. These can include a breeding pair, their young, and possibly other relatives.

Golden lion tamarins breed once per year. Mating occurs from the end of March through mid-June. Gestation (pregnancy) lasts about 4 months, and the babies arrive from September through February.

The young are typically twins, and are very dependent during the first few weeks after birth. They require nursing and being carried around. Both parents share the duties of raising them.

Is the Golden Lion Tamarin Endangered? 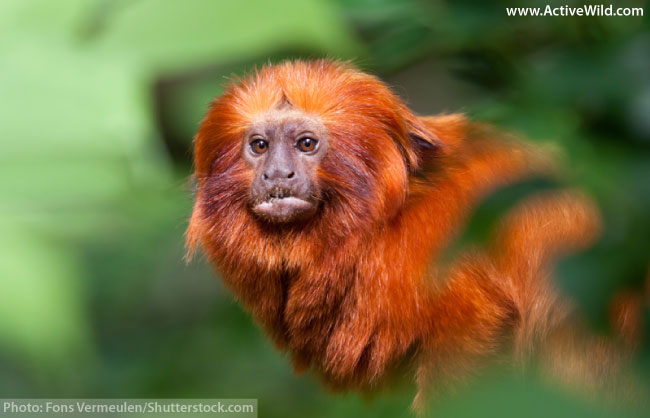 Conservation efforts include the reintroduction of golden lion tamarins from captive populations into the wild. Complete golden lion tamarin groups have also been relocated from highly degraded habitat to better, protected areas.

Reforestation efforts are also being undertaken to help reestablish some of their habitat.

Capture for the pet trade was a major threat in the past. Currently, the main risk is habitat loss. Urbanization and deforestation have left the tamarin’s habitat very fragmented, isolating the different groups.

Habitat fragmentation makes it more difficult for the golden lion tamarins to find the resources they need to survive. Also, a fragmented habitat can lead to inbreeding. Inbreeding increases the risk of genetic abnormalities, and decreases the overall health of the population.

Currently, there are over 1000 golden lion tamarins in the wild, with another 500 individuals living in captivity. Even though conservation efforts have had some success, there is still much cause for concern. The remaining habitat is not big enough for the population to keep growing and reach numbers that would take them off the endangered species list.

We hope that you have enjoyed finding out about the golden lion tamarin. You can find out about many other rainforest animals here: Rainforest Animals.