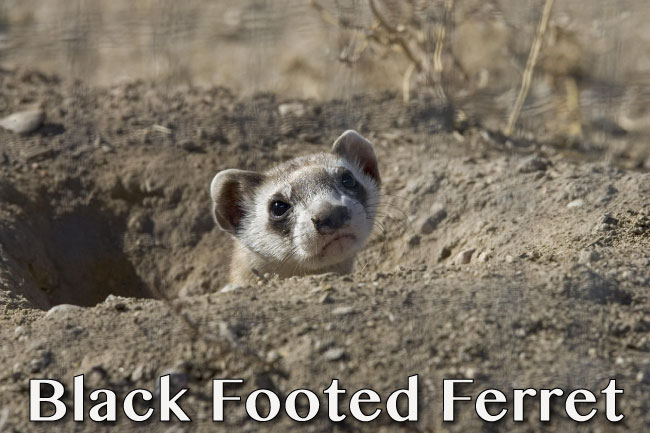 Black footed ferret facts, pictures and information. On this page, we’ll be taking a look at the black footed ferret, an endangered US mammal that has previously been declared extinct in the wild.

Be sure to watch the amazing video of a black footed ferret and its favorite prey, a prairie dog. What happens is not quite what you might expect! 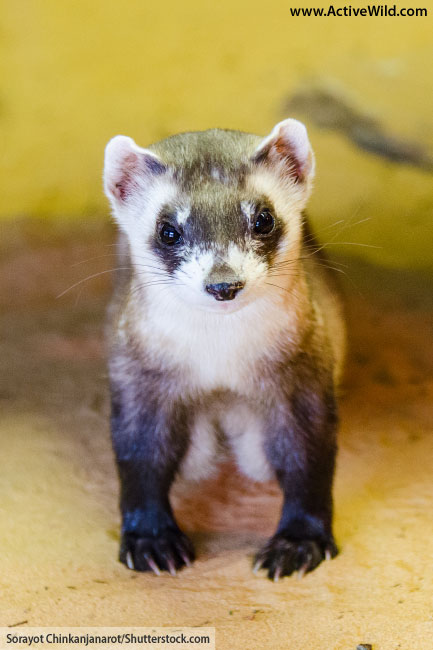 Although the black footed ferret is similar in name and appearance to the ferret commonly kept as a pet, it is a different species. The pet ferret is the domesticated form of the European polecat.

The black footed ferret was first identified by American naturalists John Audubon and John Bachman in 1851.

How to Identify the Black Footed Ferret 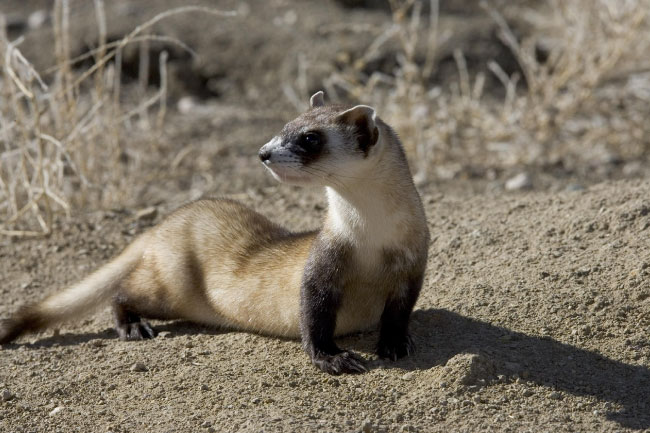 The black footed ferret has a long, slim body, with a long neck and short legs. It has strong jaws and short, triangular ears. Its large front paws and sharp claws are adapted for digging.

The black footed ferret has tan colored fur, with black markings on the feet and legs, the tip of the tail and across the eyes. The fur is lighter on the belly, and almost white on the throat and face.

The black footed ferret is a very elusive animal. It is challenging to observe in the wild because it spends most of its time underground.

In the wild, the average lifespan of a black footed ferret is 3 years. In captivity, it can live from 4 to 9 years.

Where Does the Black Footed Ferret Live? 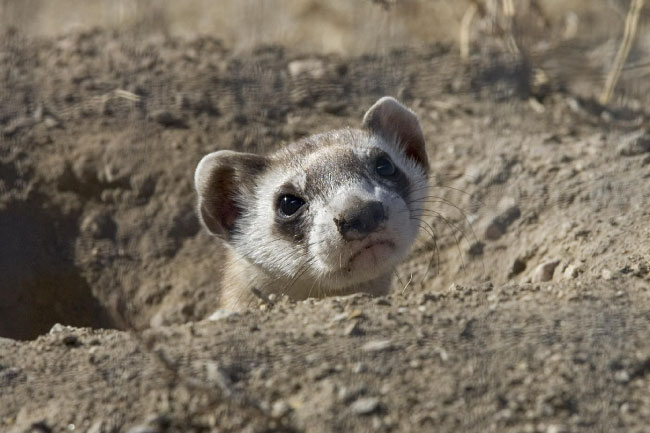 Predators of black-footed ferrets include birds such as golden eagles, great-horned owls, prairie falcons and ferruginous hawks; mammals such as coyotes, American badgers and bobcats; and reptiles such as the prairie rattlesnake.

Diet: What Does the Black Footed Ferret Eat?

Black footed ferrets hunt at night, entering the burrows of the sleeping prairie dogs and suffocating their prey with a bite to the throat.

In the video below, you can see a black footed ferret interacting with a prairie dog. Things don’t quite turn out as you might expect …

The black footed ferret is nocturnal (active at night). A solitary animal, the black headed ferret only mixes with other black-footed ferrets in order to mate.

Black footed ferrets mate in the spring, between March and April. The babies, known as kits, are born from May to June.

Usually, 3-4 kits are born per litter, and they are raised entirely by the mother. The kits are born blind and defenseless, and are dependent on their mother for several months.

For the first two months of their lives, the kits remain hidden in an underground burrow. When they are 70 days old, the mother separates them into different burrows and starts teaching them how to hunt. By Fall, the kits are ready to leave their mother and live on their own.

Is the Black Footed Ferret Endangered? 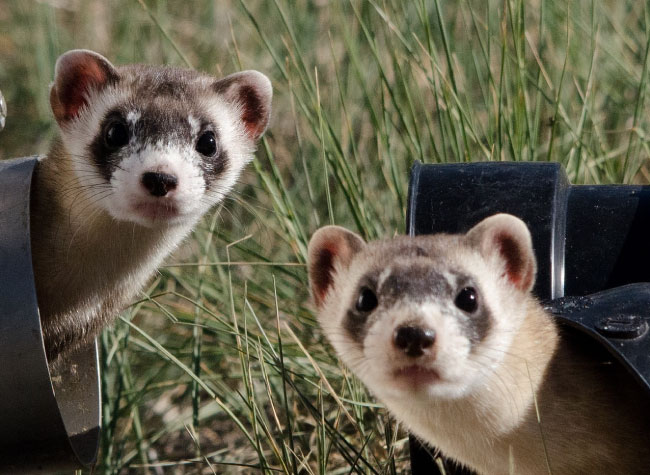 The IUCN lists the black footed ferret as endangered. The species has been twice been thought to be extinct.

Numbers of black footed ferrets declined sharply throughout the 19th century. This was due both to disease and to declining numbers of prairie dogs.

Since prairie dog activity is damaging to agricultural fields, programs were put in place to control their population. This in turn greatly affected the ferrets.

In the 1950s, black footed ferrets were believed to be extinct, until a small colony was discovered in South Dakota in 1964.

When researchers observed their numbers declining, they decided to capture some of them in order to start a captive breeding program. Unfortunately, the program was not successful and all of the ferrets eventually died. In 1979, the black footed ferret was again declared extinct.

In 1981, however, another small population of black footed ferrets was discovered in a ranch in Meeteetse, Wyoming. Just like in the past, researchers noticed their numbers declining, and decided to capture some. Their aim was to breed the ferrets in captivity and reintroduce them to the wild.

Twenty four ferrets were captured between 1985 and 1987. Although 6 of them died shortly afterwards, the breeding program was successful. Reintroduction efforts began in 1991, and continue to this day.

According to a population count in 2015, there are 295 wild-born black footed ferrets. However, only four locations of the 17-22 in which the ferrets were reintroduced are considered to be self-sustaining.

These four locations are in South Dakota, Wyoming and Arizona.

The main threats for black footed ferret survival are: loss of habitat due to prairies being converted for agricultural use, disease, and declining prairie dog populations.

Ferrets are particularly susceptible both to sylvatic plague, a non-native disease passed on by fleas, and to canine distemper virus.

We hope that you have enjoyed reading about the black footed ferret. The relationship between this species and the prairie dog demonstrates that when making any agricultural and / or conservation decisions, the entire ecosystem has to be considered, rather than just a single species.