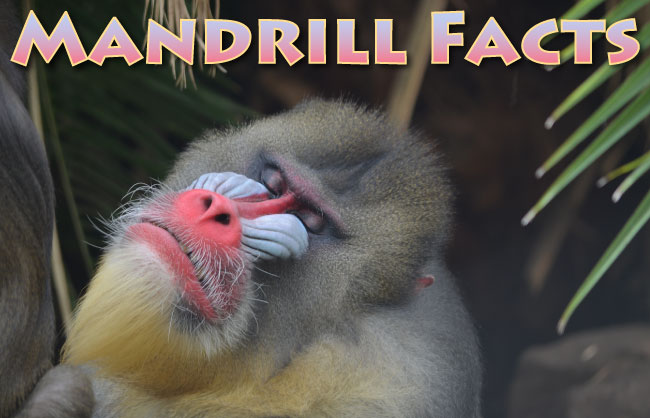 Mandrill Facts At A Glance

The mandrill is the world’s largest monkey. It is instantly recognizable due to its strikingly colored face and hindquarters.

The mandrill is similar in appearance to a baboon (although much more colorful), and was once classified in the same genus. Today the mandrill is placed in a separate genus, Mandrillus. The only other species in this genus is the drill, a closely related monkey.

The mandrill is a member of the Cercopithecidae family of primates, otherwise known as the ‘old world monkeys’.

Confused by terms such as genus and family? Check out our Animal Classification article and you’ll soon be talking like a zoologist!

The mandrill is a heavily-built monkey with olive-brown body fur. It has a large head, dog-like snout, long limbs, a stumpy tail, and hairless patches on its face and buttocks.

The male mandrill is nearly twice as big as the female and much more brightly colored. The size difference between males and females is one of the biggest of all animals.

The nose and lips of the male are scarlet with blue or purple ridges on either side. The beard and neck are yellow-white. The buttock pads are red, pink, purple and lilac, which anywhere else would be a rather pleasing combination of colors!

The male mandrill has long canine teeth, which average 4.5 cm (1.8 in) in length. These can be exposed as a threat to rivals.

Watch mandrills in the wild in the video below:

Where Do Mandrills Live?

The mandrill is found in the western equatorial African countries of Cameroon, Gabon, Equatorial Guinea and the Republic of the Congo. The Ogooué and Sanaga Rivers act as natural boundaries to its range to the east and north respectively.

Studies have suggested that the populations to the north and south of the Ogooué River are genetically different and might be a separate subspecies.

The largest recorded gathering of mandrills was seen in the Lopé National Park, Gabon. You can see this area in the map below. Zoom out to see where the region is in relation to the rest of Africa.

Mandrills usually live in tropical rainforests, but are also found in montane forests, thick secondary forests and grasslands with tree cover. Occasionally they venture into plantations.

The mandrill is semi-terrestrial, preferring to travel on all fours and forage close to the ground, but climbing into the trees to sleep. A mandrill’s home range is estimated to be about 30 to 50 km2.

When a mandrill bares its teeth and shakes its head with its head crest erect it is being friendly. Staring and beating the ground shows aggression, and presenting the rump is a sign of submission.

Both males and females have scent glands on the chest, which are rubbed against objects such as trees and rocks in order to leave scent marks.

Vocalizations are used to communicate over both short and long distances. These range from loud roaring and high-pitched screams to guttural grunts. 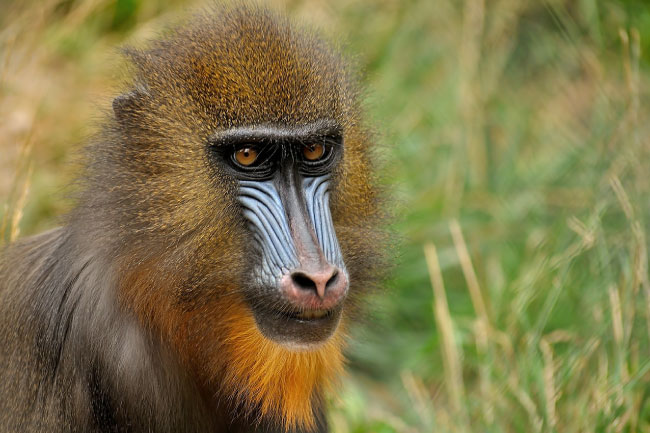 The mandrill is a social animal and lives in troops of 15 to 50 individuals. These typically consist of a single dominant male, females who are related to each other, and their young.

The bond between mothers and daughters is strong and is maintained via play and grooming. Adult males with no troop to lead are usually solitary, approaching hordes only when the females are ready to mate.

Mandrill troops often join up with others, forming large hordes that can contain hundreds of individuals.

The largest horde ever recorded contained over 1,300 mandrills. This huge group was seen in the Lopé National Park in Gabon. It is the largest non-human primate aggregation ever observed.

Mating can take place throughout the year, although it most typically occurs sometime between June and October.

The females prefer the brightly-colored dominant males over the paler subordinate males. A vivid coloration is a sign of high testosterone levels and will deepen or fade according to male status – you can recognize an alpha male by its bright coloration.

The gestation period (i.e. how long a pregnancy lasts) of a mandrill is around 175 days, with most births taking place between January and April. Females usually give birth to one baby, but will occasionally have twins.

The infant mandrills are born with black fur, with the adult coat beginning to appear after around two months. The infant clings to its mother and stays with her until she gives birth to another baby. Females usually become pregnant once every two years.

Female relatives in a troop help take care of each other’s young. This is known as alloparenting. The males will leave their natal group when they’re about six years old.

What Do Mandrills Eat?

The mandrill is an omnivore with a varied diet that includes plants and small animals. It has a preference for fruit but it will also feed on other plant material such as leaves, buds, roots, bark, seeds and nuts, as well as some fungi.

Animals eaten by the mandrill include invertebrates such as ants, termites, beetles, spiders and snails, and various small vertebrates including reptiles, amphibians, rodents, and birds (and their eggs). During the dry season when food is scarce the mandrill will often enter farms in order to feed on crops.

The mandrill has large cheek pouches in which food can be stored for consumption in a more secure or convenient location. Groups of mandrills tend to forage intensively over one area before moving on to another site.

Due to its large size, the mandrill has few natural predators, with only the leopard posing a common threat to adults.

The mandrill may occasionally be attacked by large snakes such as the African rock python and Gaboon viper, or birds of prey such as the crowned eagle. These predators are most likely to target infants.

Is The Mandrill Endangered?

The mandrill is currently rated ‘Vulnerable‘ by the IUCN.

The number of mandrills in the wild is not known, but it’s estimated that the species has declined by over 30% since 1978. The largest remaining population is thought to live in Gabon, where the mandrill is protected in the Lopé National Park.

The main threats faced by the mandrill include:

Now you know all about the largest monkey in the world, why not discover more amazing animals in these related articles …