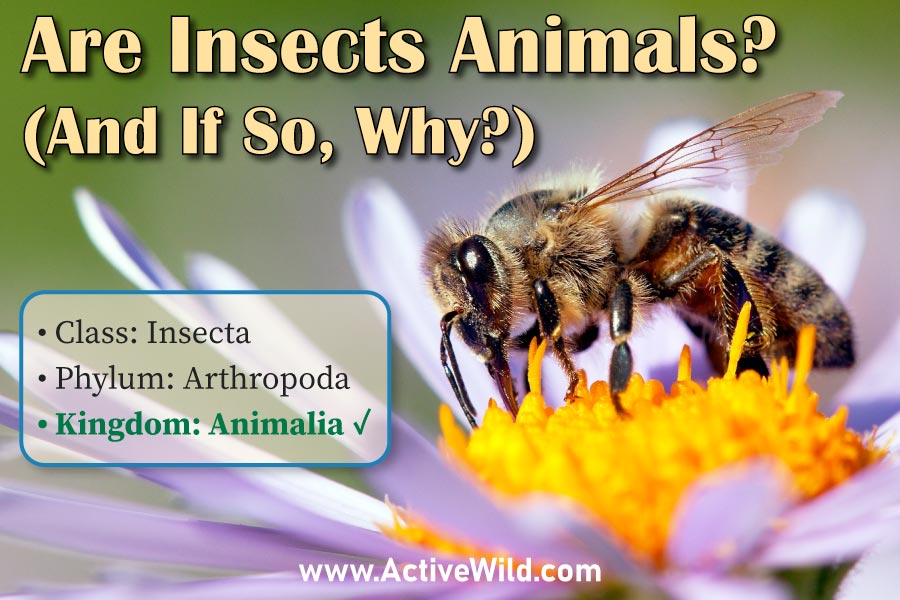 Insects are animals. Like all animals, insects are multicellular organisms that respire using oxygen, reproduce sexually, eat and move. Insects belong to the animal class Insecta, which, with around one million living species, is by far the biggest class within the animal kingdom. Insects make up at least two-thirds–and likely a much larger proportion–of all known living animal species.

On this page you’ll find a simple, fact-filled guide to insects and why they are considered to be animals…

What Is An Animal?

Why Is An Insect An Animal?

A Brief Guide To Insects

What Is An Animal?

All animals share a certain set of characteristics. If an organism has these characteristics, it’s an animal; if not, it belongs in another kingdom, such as the plant kingdom, fungi kingdom or bacteria kingdom.

Insects have all the characteristics of animals, and therefore are animals!

Further down the page you’ll find exactly why an insect is an animal, plus a list of all the other kingdoms of living things into which an organism can be placed.

Is An Insect An Animal? Why The Confusion?

Most people, when asked to think of an animal, will come up with either a mammal, reptile, bird, amphibian or fish.

Insects are invertebrates – they don’t have a backbone, and, rather than being held together by an internal skeleton, their bodies are surrounded by hard, external skeletons, known as exoskeletons.

But an insect is still an animal! (You’ll find out why below.)

Because we’re vertebrates, we tend to view other vertebrates as “typical” animals.

But here’s a surprising fact…

There are well over ten times as many insect species as there are all vertebrate species combined!

Currently, the Catalogue of Life – an online database of species – contains 950,680 insect species and 73,340 chordate species – that’s a ratio of almost 13:1 insects to chordates! (Source)

Chordates are animals in the phylum Chordata.

A phylum is a large group of related animals.

Chordata contains all vertebrate animals, including mammals, reptiles, birds, amphibians and fish, as well as other animals with basic spinal cord-like structures.

Seeing as insects make up such a large proportion of the animal kingdom, perhaps they should be considered to be “typical” animals, rather than vertebrates such as mammals and reptiles!

An animal (such as an insect) is an organism (a living thing) that belongs to the animal kingdom, Animalia.

Animalia isn’t the only kingdom. Depending on which system is being used, there are either five or six kingdoms of living things (including Animalia) into which an organism can be placed.

These kingdoms are listed below:

(In some classification systems, bacteria and archaea are replaced by a single kingdom, Monera.)

The animal kingdom contains around 1.5 million living species, of which an amazing 1 million are insects.

However, these figures contain just the number of “described” species.

A species is said to be described when it is named and accepted as being a new, unique, species.

A large number of animals, many of which are insects, are currently undescribed.

Scientists estimate that at least 4 million, and probably many more living insect species are undescribed, and that insects make up at least 90% of all living animal species.

What about sponges? Corals? Oysters? Venus fly traps? (The first three are animals, the Venus fly trap is an insect-eating plant).

As we’ve found, not all animals are “typical” animals, such as mammals and reptiles. In fact, as many as 97% of all animals are invertebrates, such as insects, arachnids, crustaceans, mites, centipedes and millipedes, etc.

You can find out more about the animal kingdom on this page: Animals: The Ultimate Guide To The Animal Kingdom

Why Is An Insect An Animal?

An insect is considered to be an animal because it has all the characteristics of an animal. Characteristics of animals include being multicellular, being able to move, respiring using oxygen, and (usually) reproducing sexually. If an organism doesn’t have all of these characteristics, it belongs to another kingdom, such as the plant kingdom or fungi kingdom.

The bodies of all animals, including insects, are comprised of many different cells. This distinguishes animals from unicellular (single-celled) organisms such as bacteria, some plants, and some fungi.

The cells of all animals – including insects – are different to those of plants and Fungi in that they lack a cell wall.

You can find out more about animal cells (and the differences between animal and plant cells) on this page: Animal Cells

A heterotroph is an organism that cannot produce its own food. Animals are heterotrophs; unlike plants, which produce their own food via photosynthesis, animals (including insects) have to eat organic material to stay alive.

Photosynthesis is the process by which plants convert energy from the sun into chemical energy (food). You can find out more about photosynthesis on this page: Photosynthesis Facts

Virtually all animals respire aerobically. Aerobic respiration is the process by which animal cells release energy from glucose using oxygen.

Simply put, aerobic respiration allows an animal’s body to obtain the energy it needs to keep itself alive from its food, and this process requires oxygen.

A by-product of aerobic respiration is carbon dioxide. The intake of oxygen, and the expulsion of carbon dioxide, is known as gas exchange. This takes place when an animal breathes.

Although insects don’t have lungs, they perform gas exchange by taking air in via openings called spiracles and transporting it around the body via a system of tubes called “tracheal tubes”.

Most (but not all) animals reproduce sexually, with two individuals each contributing half of their genes to their offspring.

Some animals are able to reproduce asexually. Asexual reproduction does not require a partner, and involves the parent passing all of their genes to their offspring.

Insects reproduce in many different ways. Most reproduce sexually, but some (including some stick insects, some bees and some wasps) reproduce asexually.

A Brief Guide To Insects

Below is a brief guide to insects. You’ll find a more thorough guide on this page: Insects: The Ultimate Guide

As we’ve found, insects are members of the class Insecta, a highly diverse group of animals that contains around 1,000,000 species.

Some of the largest insect orders (in terms of numbers of species) are listed below:

(Figures show the number of species in each order as listed in the Catalogue of life, January 2022 – Source)

Although individual insects can look very different to one another, all one million insect species share certain characteristics that identify them as being insects, rather than other animals.

Insects are invertebrates (i.e., they lack a backbone), and have a hardened exoskeleton that supports and protects the various body parts.

The bodies of all insects are segmented, and the various segments are divided into three main body parts: the head, thorax and abdomen.

Insects have six legs. These three pairs of legs are all attached to the thorax (the middle section of an insect’s body).

On an insect’s head are found two large compound eyes, each of which may contain several thousand individual lenses; up to three simple eyes; and a single pair of antennae.

The class Insecta is itself part of a larger group of invertebrate animals, the phylum Arthropoda.

Using the information on this page, we can safely say that insects most definitely are animals! Insects are multicellular, they move, they eat and they breathe, making them fully-fledged members of the animal kingdom!

In addition, insects outnumber vertebrates by over ten to one! Perhaps, therefore, insects should be considered to be the “typical” animals, rather than mammals, reptiles, birds, etc.!

You can find out more about insects and other animals on the following pages:

Is A Spider An Insect? What Are The Similarities & Differences Between Spiders & Insects?

Is A Beetle An Insect – And Why? Beetle Characteristics

Rainforest Insects: A List Of Insects That Live In Rainforests, With Pictures & Facts

Animal Classification: How Scientists Make Sense Of The Animal Kingdom By Naming And Grouping Species.