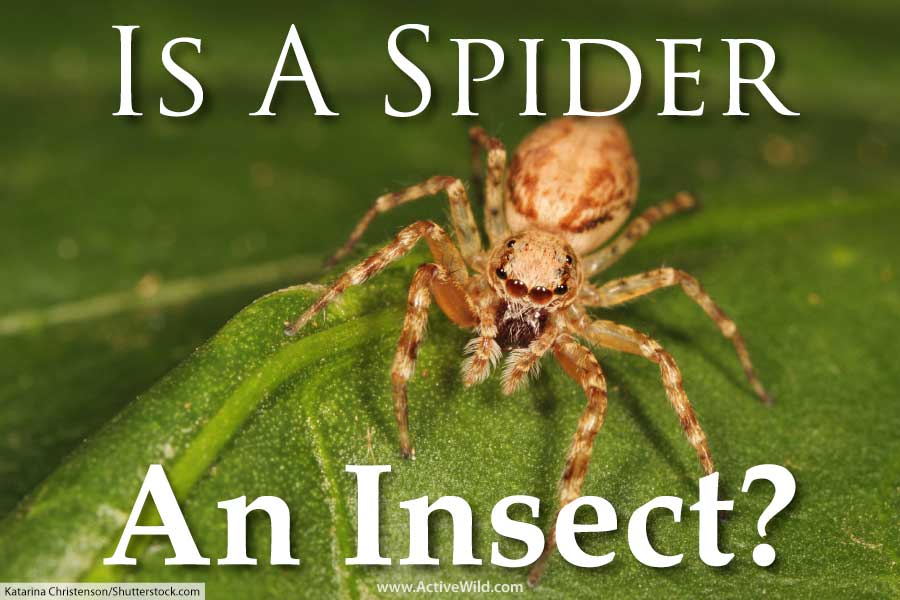 Is a spider an insect? On this page we ask ‘Are spiders insects?’ and explain the differences between insects and spiders. We’ll also travel back hundreds of millions of years to the Cambrian Period, when the earliest ancestors of both spiders and insects first appeared…

Is A Spider An Insect? (And If Not, What’s The Difference?)

A spider is not an insect; a spider is an arachnid. Arachnids are a separate group of animals to insects.

A ‘class’ is a group of related animals. You can find out more about animal groups such class, family and kingdom on this page: Animal Classification.

Spiders are more closely-related to other arachnids, such as scorpions and solifuges (camel spiders), than they are to insects.

Although both groups – arachnids and insects – are descended from the same animals, these animals lived hundreds of millions of years ago.

Because the split between arachnids and insects took place such a long time ago, there are many differences between today’s spiders and today’s insects.

Similarities Between Spiders And Insects

It’s not surprising that people often ask ‘Is a spider an insect?’; both types of animal are small, have thin, jointed legs, and tend to dart about somewhat unpredictably. The similarities between arachnids such as spiders and insects are due to their shared ancestry.

Arachnids and insects both belong to a larger group of animals, Arthropoda. The ancient ancestor of both spiders and insects was an arthropod.

Other arthropods include crustaceans (animals such as crabs and lobsters), myriapods (millipedes and centipedes), and various other related groups of invertebrate animals.

Arachnids, insects, and all other arthropods have certain characteristics in common:

The bodies of arthropods are divided into distinct sections. This is likely a result of their having originally evolved from worm-like animals with segmented bodies.

All arthropods have an even number of jointed legs. The word ‘arthropod’ itself means ‘jointed foot’.

Most arthropods have additional pairs of jointed appendages (see the ‘Additional Appendages’ section, further down the page). These have evolved to perform different tasks depending on the arthropod group.

All arthropods are invertebrates. Invertebrates are animals that don’t have backbones.

Instead of an internal skeleton, arthropods have a hard, protective exoskeleton. This is multi-layered and waxy in order to prevent water loss.

Having a hard outer skeleton is restrictive to growth. For this reason, as an arthropod grows, it periodically sheds its exoskeleton. This process is known as molting (moulting in British English). After each molt, the arthropod’s body expands and a new exoskeleton hardens around it.

Arthropods are at their most vulnerable just after a molt when their new exoskeleton is still soft.

The Differences Between Spiders And Insects

As we’ve found, there are many similarities between spiders and insects. So what are the differences between the two groups of animals: arachnids and insects? What makes a spider a spider and an insect an insect?

Spiders (and other arachnids) have eight legs, whereas insects have six.

Spiders have two extra pairs of appendages positioned in front of their legs. The pair nearest the mouth are known as chelicerae. The lower parts of a spider’s chelicerae take the form of fangs, which, in most species, are venomous.

The next pair of appendages are the spider’s pedipalps. These help to break up food, and in male spiders are used to transfer reproductive material to the female.

(A scorpion’s pedipalps take the form of large claws.)

Unlike insects, spiders do not have antennae. Antennae are jointed appendages that are mounted to an insect’s head. These are used not just to feel, but also to taste and smell.

Spiders also lack wings, and therefore cannot fly. (Although most insects have wings, some do not.)

A spider’s body has two main sections, whereas that of an insect has three sections.

Each of the main sections of either an arachnid or an insect’s body is known as a ‘tagma’ (plural ‘tagmata’).

An insect’s body has three main sections: the head, thorax and abdomen.

In spiders, the head and thorax sections are fused together, forming a section known as the prosoma. The hind section of a spider is called the abdomen, or opisthosoma.

A spider’s abdomen is equipped with spinnerets – the organs that produce the silk out of which a spider’s web is made.

Number And Type Of Eyes

Spiders lack the compound eyes that are found on insects. Compound eyes consist of many (potentially thousands) of lenses grouped in one larger organ. In addition to a pair of compound eyes, insects have up to three simple eyes, which are better at detecting light than shape.

Most spiders have eight eyes, although there are species with six or fewer eyes. Although a spider’s eyes are more like an insect’s simple eyes, some species have very good vision.

Is A Spider An Insect? Conclusion

Are spiders insects? No, they are not. Spiders belong to a class of animal known as arachnids, whereas insects form a class of their own, known as Insecta.

Both arachnids and insects belong to a larger group of animals: the phylum Arthropoda. Animals belonging to this group are known as arthropods.

Because of their shared ancestry, both spiders and insects have certain characteristics in common.

However, because the two groups of animals branched off many millions of years ago, they have developed many characteristics of their own. These characteristics can be used to tell them apart.