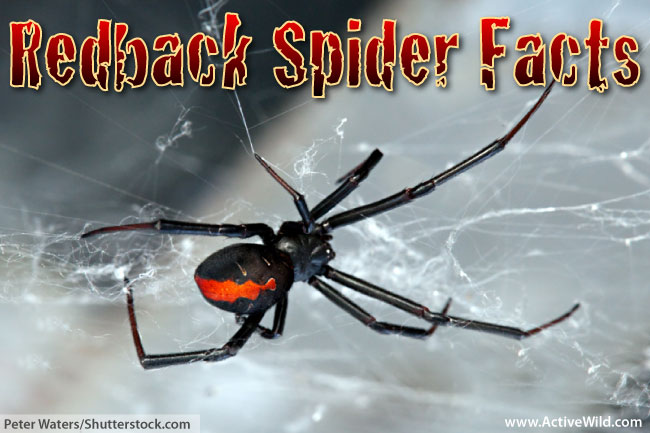 Redback Spider facts for kids (and adults). This animal is part of the Active Wild Online Zoo: information, pictures and videos of all your favorite animals!

Redback Spider Facts At A Glance

Watch the video below to see Redback Spiders in the wild:

The redback spider is a venomous spider that is mainly found in Australia. Although small, the redback can deliver a painful – and potentially deadly – bite.

The redback spider is attracted to the warmth and shelter provided by human buildings. This means that they’re often found lurking in sheds, letterboxes … and outdoor toilets! Don’t forget to check under the seat!

The female redback is significantly larger than the male (females can weigh up to 100 times more than males).

The female’s body is around 10mm (0.4 in.) in length. Its eight long, slender legs are around 2 to 3 times the length of its body.

The female redback’s body and legs are dark brown or black. On its abdomen (the large, rounded ‘rear’ half of its body) is a red stripe which may be broken into red dots. On the underside of the abdomen is a red ‘hourglass’ shape.

The female’s red markings give the species its name.

The male redback is substantially smaller than the female. Its body and legs are pale brown, and it has black and white markings on the top of its abdomen and a pale hourglass on the underside.

The redback is a member of the Latrodectus genus. This group of closely-related spiders are known as ‘widow spiders’. The name comes from the females’ habit of eating the male after mating!

The redback spider is found throughout Australia. Cities in which it is particularly common include Alice Springs, Perth and Brisbane. Urban areas such as these provide the spider with heat and shelter. The redback will often seek out the warmth of buildings. Unfortunately this brings it into regular contact with humans.

Small colonies of redback are also found in New Zealand. They’ve also spread to other parts of the world after having been unintentionally transported with goods from Australia. There is an established colony in Osaka, Japan.

Redback bites are the most common serious spider bite in Australia. The redback spider’s venom is a neurotoxin (a poisonous substance that affects nerve cells) called latroxin. The venom is injected into the victim via the redback’s hollow fangs.

Initially, a bite from a redback may feel like nothing more than a pinprick. In some cases the spider will give a ‘dry bite’, in which no venom is injected. However, if the spider is successful in injecting venom then the victim will soon begin to experience intense local pain.

In more serious cases the victim will begin to sweat and to experience muscular weakness, spasms, nausea and vomiting.

A bite from a redback is rarely fatal, especially now that antivenom is readily available for those who have been bitten. A 2004 study reported only one fatality since 1955.

It is commonly thought that only female redbacks will bite humans. However, studies have shown that males too will bite, although the affect is milder. Only the female redback is capable of delivering a potentially life-threatening bite.

The redback spins an untidy, tangled, funnel-like web. The spider’s usual prey includes insects and other spiders. However, larger animals such as lizards and even snakes are occasionally trapped in the web and killed.

Warning – Not For The Fainthearted!

The redback waits for prey to become entangled in its web. When the spider feels the vibrations given off by the struggling prey, it approaches and further immobilizes the victim by spraying it with a strong, sticky silk.

The redback then bites the victim, paralyzing it and also liquefying its insides. The victim is then wrapped in silk and pulled deeper into the web. The spider then sucks out the victim’s now liquid insides!

For a male redback, mating is a risky business that more often than not ends in his being eaten!

After tentatively approaching the female, and if his advances are accepted, he probes her with his palps (special organs located near its mouthparts).

During mating, the male often maneuvers himself towards the female’s mouthparts. It is likely that this suicidal act increases the likelihood of a successful mating. Unfortunately for the male, it also means that he is usually either eaten or fatally wounded.

After mating, the female can produce several batches of eggs over the next two years. The female typically produces 5 egg sacs, each of which holds around 250 eggs. The eggs take between 2 and 4 weeks to hatch. Soon after hatching, the tiny spiderlings are dispersed by the wind, carried by thin strands of silk.

The Redback Spider is not top of the food chain, and its predators include other spiders such as the daddy log-legs spider and the black house spider. The spider wasp Agenioideus nigricornis preys on the redback, and other insects eat its eggs.

What do you think of the redback spider? Have you ever seen one – either in a zoo or in the wild?

Let us know in the comments below!