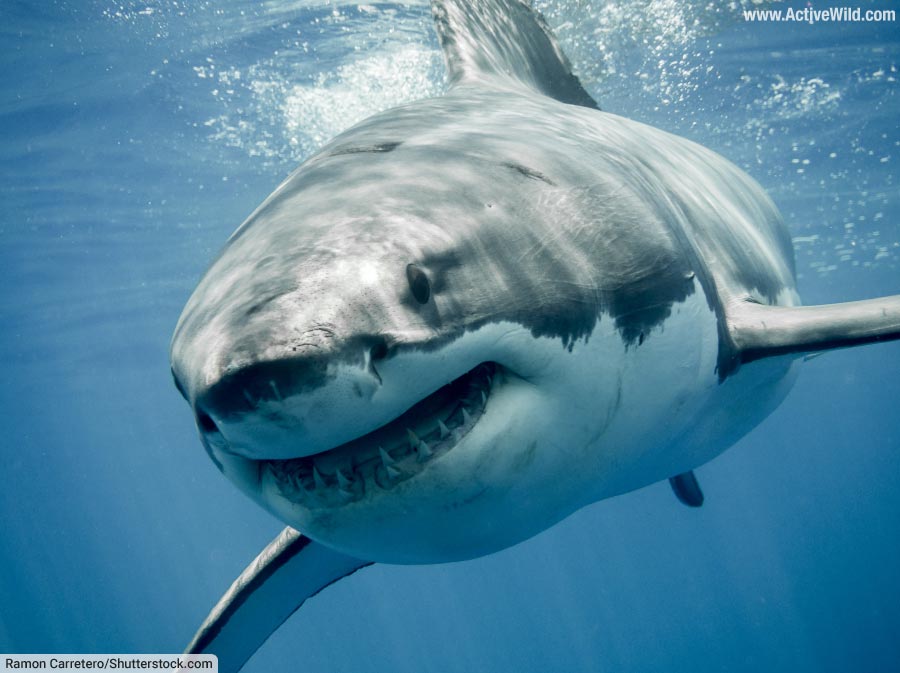 Great white shark facts, pictures and in-depth information: get the low down on one of the world’s most feared ocean predators!

What does the great white shark eat? What habitat does it prefer? Does it ever sleep? Does it have any predators of its own? Read on to find out…

The great white shark, scientific name Carcharodon carcharias, is a fish in the white shark family, Lamnidae. This family is part of a larger group of sharks, the order Lamniformes, whose members are known as “mackerel sharks“.

Unlike those of requiem sharks (such as the tiger shark), the eyes of mackerel sharks lack a protective clear, third eyelid known as a nictitating membrane.

How Dangerous Is The Great White Shark?

The great white shark is greatly feared throughout the world, and to some extent the shark’s bad reputation is deserved; the species is, after all, an apex predator equipped with a range of adaptations to locate and overcome its prey.

The great white shark is responsible for a greater number of fatal attacks on humans than any other shark species. In fact, according to the International Shark Attack File, the species is responsible for almost three times as many fatalities as its nearest “competitor”, the Tiger Shark. (Source)

However, it is important to remember that the majority of great white attacks on humans are not fatal, and the the great white does not specifically target humans. In fact, scientists suggest that the fish are often “sample biting” before releasing their “catch”.

The great white shark is the world’s third-largest fish, behind the whale shark and basking shark.

Watch the video below to see one of the biggest great white sharks ever to be filmed!

Great white sharks are characteristically slate-grey on the upper body with the distinctive white underbelly from which they get their name.

The “dark uppersides / pale undersides” color scheme in known as countershading, and provides camouflage from both above and below. Countershading is seen in a wide range of ocean animals, from sharks to penguins.

Great white sharks are found in temperate coastal waters all around the world, and will occasionally travel into the open ocean.

The species is migratory, and is known to cross oceans. Individuals have been recorded traveling between South Africa and Australasia.

There is no reliable data on the great white’s population size.

On average, female great white sharks are thought to become sexually mature between 17 and 30 years of age. Gestation is thought to last over a year, and a litter typically consists of 2 to 10 infants.

As is the case with all sharks, the great white shark’s young are known as “pups”.

The lifespan of the great white shark is estimated to be 70 years.

What Does A Great White Shark Eat?

Great white sharks are opportunistic hunters, with sharks of all ages eating a wide variety of animals, including fish, marine mammals, birds and reptiles (in the shape of sea turtles).

Great whites like to have the element of surprise when stalking their prey and will often swim below their victims before rapidly swimming upward to attack.

After eating a large meal, a great white shark might not feed again for up to 2 months.

The great white shark has numerous adaptations for a predatory lifestyle. Its streamlined shape and powerful tail allow it to reach high speeds, allowing it to capture other fast-swimming ocean animals.

How Fast Can A Great White Shark Swim?

How Many Teeth Does A Great White Shark Have?

The shark’s mouth contains around 300 serrated, triangular teeth, ideal for cutting through flesh.

The shark’s teeth are arranged in rows, with new rows continuously moving forwards to replace the older teeth at the front.

In the course of its lifetime, a great white shark can get through 20,000 teeth!

Like all sharks, great white sharks are equipped with sense organs known as ampullae of Lorenzini, which can detect electromagnetic fields produced by the muscles the shark’s prey.

It’s unlikely that great whites sleep in the same way as we do. They exhibit periods of inactivity, but whether they are “sleeping” or just “resting” is hard to say.

Great whites have to swim constantly or they will sink. Like all cartilaginous fish (fish whose skeletons are made of cartilage, rather than bone), the great white lacks a swim bladder to keep it afloat. (This internal, gas-filled organ is common among bony fish.) Instead, the great white shark has an oily liver, which provides some floatation.

The great white shark is rated “Vulnerable” by the IUCN. The species population is declining, and this threatened shark could potentially become an endangered species.

The main threat to the great white shark is accidental capture (bycatch) by fisheries employing techniques such as longlines, gillnets and trawling whilst targeting other species.

We hope that you have enjoyed our great white shark facts for kids page.