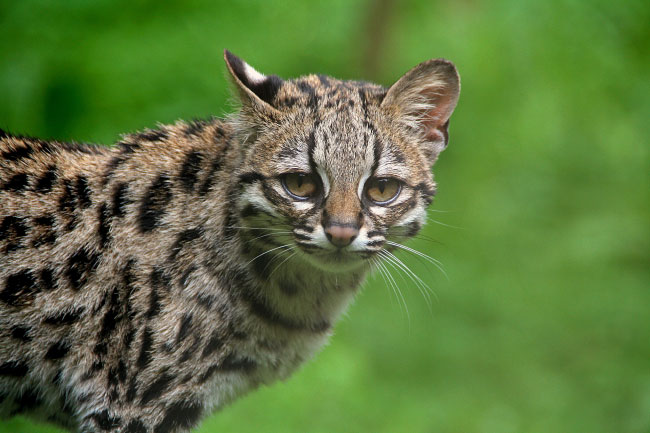 Margay facts, pictures, video and information. Meet the margay, a wild cat found in the rainforests of South America. This small predator has the amazing ability to climb head-first down trees – a feat accomplished with the aid of specially-adapted flexible ankles.

Let’s find out more about this awesome felid …

Margay Facts at a Glance

The margay is a small, spotted wild cat native to the rainforests of Central and South America. Ten subspecies of margay are currently recognized. Each of these has slight physical variations to distinguish it from margays found in other areas within its total range. 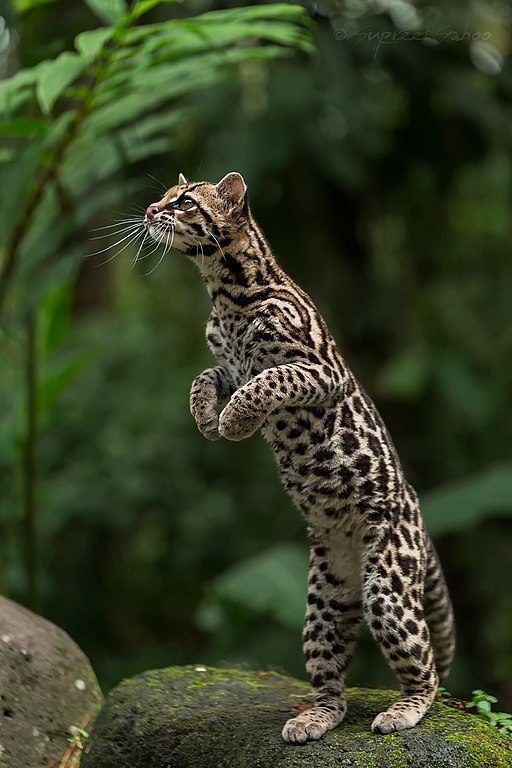 The margay is similar in appearance to two other spotted rainforest cats: the ocelot (Leopardus pardalis) and the oncilla (Leopardus tigrinus). It is mid-way in size between these species, being smaller, and having a more slender build and longer limbs than the ocelot, but being slightly bigger than the oncilla.

The margay’s soft, thick fur ranges from greyish brown to tawny yellow in color. It is marked with numerous rows of dark spots and rosettes. Each margay’s coat has a unique pattern.

The margay’s tail can reach up to 51 cm (20 in) in length, and is marked with 10 to 12 dark rings. The tip of the tail is black. The backs of the ears are black, and have white central markings.

Other distinguishing features of the margay include: fur on the back of the neck that points forwards rather than backwards; and very large eyes in proportion to its head size. 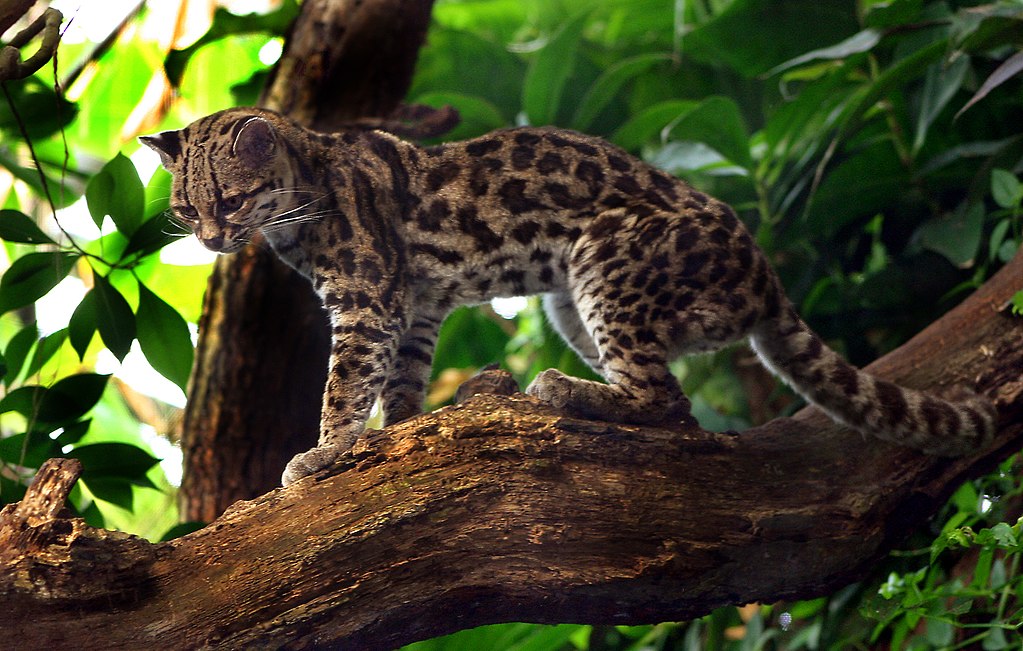 The margay has a broad distribution range, although it occupies only a fairly small portion of it. The species is found in parts of Mexico, throughout Central America, and in northern South America.

Is The Margay Found In The USA?

There has been one record of the species being seen in Texas, but it is unlikely that there is a resident population in the United States.

The margay tends to stick to areas with an extensive tree cover. These include: evergreen forest, tropical dry forest and high cloud forest.

Occasionally the species can also be found in savanna habitats with small forest fragments and even cocoa and coffee plantations, although in general the margay will avoid human settlements and other habitats altered by humans.

The margay is rarely found at elevations (heights) above 1,200m (3,937ft). However, there are some reports of the species occurring at elevations above 3,000m (9,843ft) in the Andes mountain range.

The margay is mainly nocturnal. It hunts at night and tends to spend the day in the trees, resting high up in the branches and in tangles of lianas (vines).

Like most other cat species, the margay is solitary and spends most of its life alone.

Margays establish relatively large territories considering their small physical size. A typical margay home range varies in size from 11 to 16km2 (4.2 to 6.2mi2). Individuals mark their home range by scratching the ground and branches, as well as by urinating. 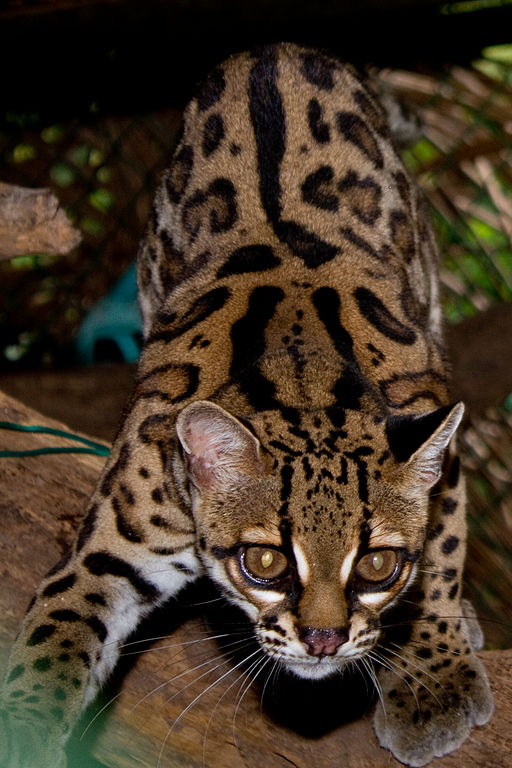 With a long tail to help with balance and wide feet with large claws to help achieve a secure grip, the margay is an excellent climber. Because its ankle joints are flexible (rotating up to 180 degrees), the animal is able to climb head first down a tree trunk.

The margay can also dangle from a branch holding on with just one hind foot, while manipulating an object with its front paws.

Despite its agility as a climber, the margay is more likely to hunt and travel on the ground.

The margay may breed any time of the year. Mature females usually become pregnant only once every two years. The female may be in oestrus (ready to mate) for 4 to 10 days every 32 to 36 days. Both females and males vocalize (make vocal sounds) to attract the attention of potential mates.

The gestation period (pregnancy) lasts from 76 to 84 days, after which a single kitten (or very rarely two) is born in a burrow or in a hollow log.

The kittens’ eyes are closed for the first two weeks of their lives. They start exploring their environment at around 5 weeks of age, and by 2 months of age have started to eat solid food.

It’s thought that only around half of all margay kittens survive to maturity.

Although the margay mainly hunts on the forest floor, it will occasionally find prey in the trees. Small rodents make up the largest proportion of the margay’s diet, but it will also prey on other small and medium-sized mammals, including: squirrels, rabbits, agoutis and monkeys.

Lizards, birds, eggs, tree frogs and insects feature less prominently in the margay’s diet, and the species will also consume small quantities of fruit, grass and other plant matter (which are thought to help with digestion).

The margay has been observed mimicking the vocalization of a prey species when hunting: it can imitate the call of the infant pied tamarin (Saguinus bicolor) in order to lure adult tamarins closer.

Is The Margay Endangered?

The margay is rated ‘Near Threatened‘ by the IUCN.

Since the margay naturally occurs at very low population densities, produces very few young (which themselves have a low survival rate), and has a population which is severely fragmented, it is expected that the species will keep declining.

The main threats to the margay include: