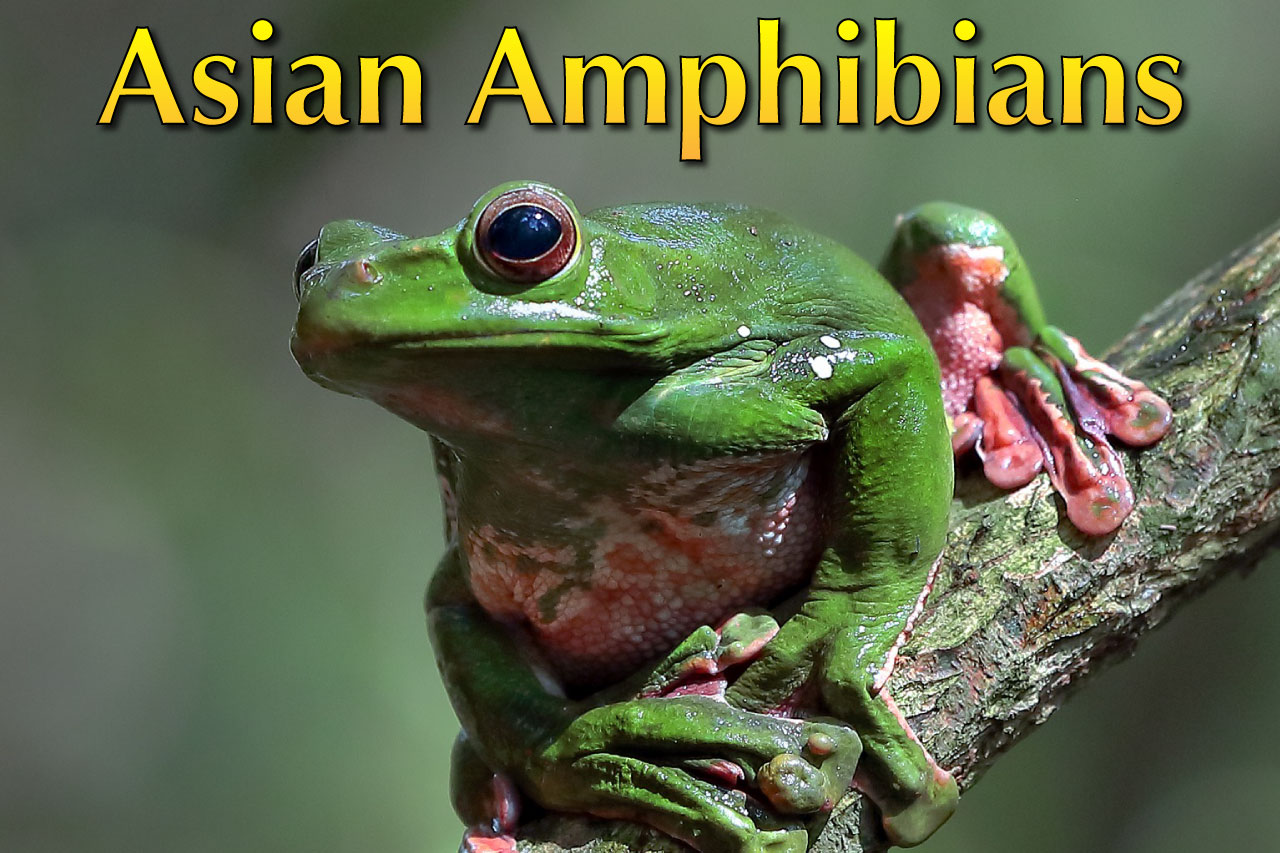 List of amazing Asian amphibians with pictures and facts.

Asia’s star animals include tigers, elephants, orangutans and pandas. However, there’s much more to Asian wildlife than mammals: the continent is also home to many amazing amphibians.

All three of the main amphibian groups – frogs, salamanders and caecilians – are present in Asia.

On this page you’ll discover: frogs that can glide from tree to tree; weird-looking balloon-like frogs that live underground for nearly all of the year; and the world’s largest amphibian!

The Asian common toad is found in South and Southeast Asia. It is common throughout much of its range and is found in a variety of non-forest habitats.

The Asian common toad is a member of the ‘true toad’ family bufonidae. This large species grows to around 20 cm (8 in) in body length.

The banded bullfrog is also known as the chubby frog. It has a round, dark body with a pale stripe running along each side. The species grows to around 8cm / 3in. in body length.

The banded bullfrog is native to Southeast Asia. It is able to live in a variety of habitats, including forests, grasslands and urban areas.

When threatened, the banded bullfrog will expand its body and secrete a noxious substance from glands in its skin.

Beddome’s caecilian is a snake-like amphibian present in the rainforests of India’s Western Ghats mountain range. Its back and sides are dark brown. A yellow strip runs along each side of the body. The species reaches a maximum length of around 27 cm (10.6 n.).

Beddome’s caecilian burrows in earth and leaf-litter. It lays eggs and its larvae are aquatic.

Chalazodes Bubble-Nest Frog is also known as the white-spotted bush frog, or Günther’s bush frog. It is a small green frog found in the rainforests of the Western Ghats mountain range in India. The species is nocturnal and arboreal (tree-dwelling).

This rare Indian frog was first discovered by English military officer and naturalist Colonel Richard Henry Beddome and named in 1876 by Albert Günther. The species was subsequently believed to be lost until it was rediscovered in 2011.

The Chinese giant salamander is the world’s biggest amphibian. It grows to lengths of up to 1.8 m (5.9 ft.) and weighs up to 30 kg (66 lb.). Its body is dark brown with mottled markings. It has a flat head and body, and a long, paddle-like tail.

The Chinese giant salamander is fully aquatic, retaining its gills even in adulthood. It is found in hill streams in forested areas in central, south-western and southern China.

The species is critically endangered. It has been heavily hunted for food and for use in traditional Chinese medicine. It has also suffered from habitat loss.

The common tree frog goes by a number of other names, including Four-lined Tree Frog and White-lipped Tree Frog (but it is not the same species as the white-lipped tree frog found in Australia).

The common tree frog is found throughout much of Southeast Asia. Its range also extends to china and several other regions. It lives in a variety of habitats, including tropical forests and grasslands. The species is often kept as a pet.

The Japanese fire-bellied newt is endemic to (i.e. only found in) Japan, where it lives in slow-moving streams and rivers in forests and grasslands. This small black-brown salamander reaches lengths of around 14 cm (5.5 in). Its skin is often patterned with red spots.

This strange-looking amphibian lives in the rainforests of southern Thailand, Malaysia, Singapore and the islands of Sumatra and Borneo. The ‘horns’ in its name are triangular projections over its eyes. The species also has an extended, triangular nose. Its body is patterned with various shades of brown. This provides excellent camouflage against the leafy forest floor habitat in which it lives.

Although the species’ global conservation rating is ‘Least Concern’, in Singapore it is considered to be an endangered species as habitat loss has cause its local population to decline.

The luristan newt is a distinctively-marked salamander found in the southern Zagros Mountains in Iran. It is found in only four mountain streams and its population is severely fragmented. The main threat to this species – whose conservation status is ‘Vulnerable’ – is harvesting for the pet trade.

Looking like a shiny-skinned, inflated balloon, the purple frog is one of Asia’s strangest looking amphibians. Reaching around 9 cm in body length, the purple frog, as its name suggest, has purplish-grey skin.

The species is only found in the Western Ghats Mountains of southern India. This burrowing amphibian spends most of its life underground, only emerging for a few weeks each year to breed. 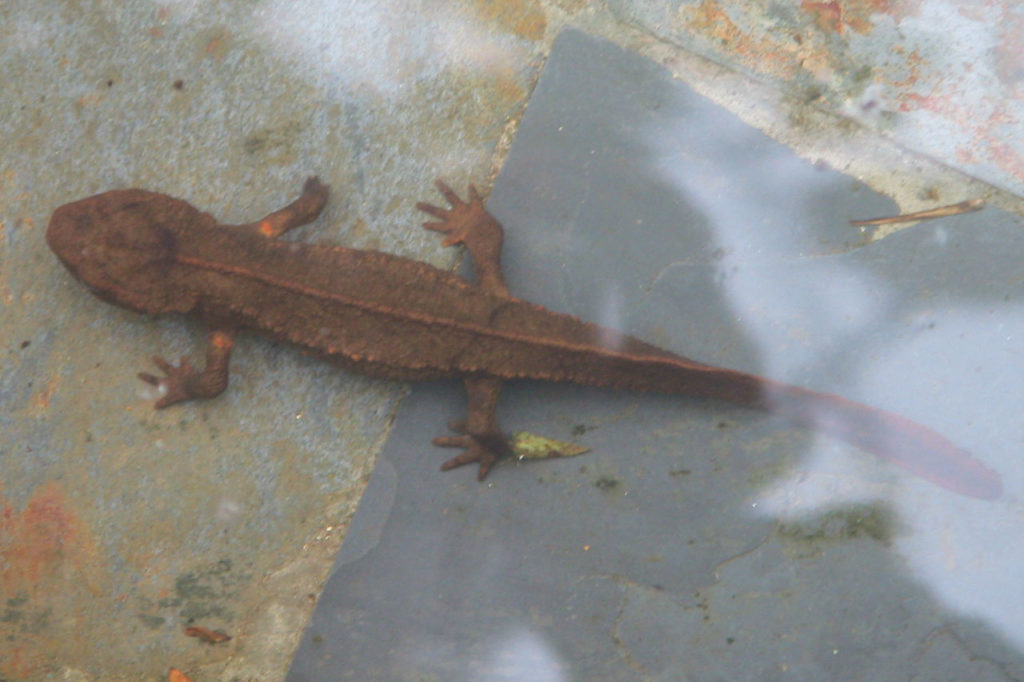 The Vietnamese salamander is only found in Vietnam. It lives in forest habitats, where it breeds in freshwater pools and streams. The species is collected for use in traditional medicine, and is also threatened by habitat loss.

Wallace’s flying frog is a member of the ‘moss frog’ family, Rhacophoridae. It is found in the rainforests of the Malay Peninsula and Indonesia, and is present on both Sumatra and Borneo.

Using its webbed feet as parachutes, Wallace’s flying frog can glide from tree to tree. Its large toe pads cushion its landing and allow it to hold onto branches. The amphibian’s gliding abilities are used both to forage for food and to evade predators.