Caecilian facts for kids and adults, with pictures, information and video. Everyone knows what frogs and toads look like, and most people could identify a salamander, but did you know that there’s a third type of amphibian? 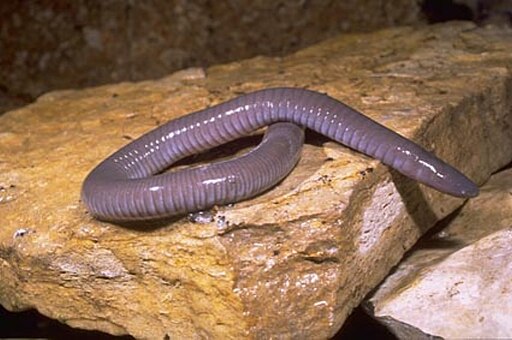 On this page we’ll meet the caecilians: a mysterious group of worm-like amphibians.

What Are Caecilians? Introduction

(The other amphibian orders are the Anura (frogs and toads) and the Urodela (salamanders)).

Little is known about caecilians due to their secretive nature; these mysterious animals spend a lot of their time hidden, burrowing in loose soil and leaf litter. One caecilian family, Typhlonectidae, is aquatic.

Scientist began to study caecilians in the 18th century. Caecilians were first believed to be snakes due to their elongated, limbless bodies.

Don’t know the difference between an order and a family? Check out our Animal Classification page.

Most caecilians are highly adapted to burrowing; their bodies are long and streamlined, and their pointed snouts and strong skulls help them to force their way into the ground. Their eyes are small and protected by a layer of skin. Their mouths are usually positioned under the head.

The skin of caecilians is made of numerous ring-like folds known as annuli. These give the animals a segmented appearance. Some caecilian species have tiny dermal scales embedded in their skin – a feature unique among amphibians.

Most caecilians are dark in color. Some species are more brightly-colored, appearing in shades of yellow, orange, green, purple or blue. The bright coloration is likely to be a warning for predators: some caecilians have glands in their skin that secrete a toxin.

Another peculiar feature of caecilians is the pair of short sensory tentacles positioned between the nostrils and the eyes, believed to aid in finding prey.

Nearly 200 species of caecilians have been identified. They are currently divided into 10 families, including the most recent addition, Chikilidae, which was discovered in 2012. 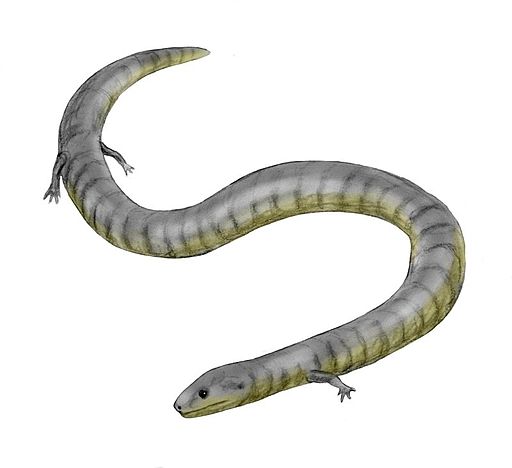 Relatively little is known about the evolutionary history of caecilians. The sparse fossil record includes only 3 isolated backbones. One, found in Africa, is from the Cretaceous period. The other two are from the Palaeocene period, and were found in Brazil and Bolivia.

It is thought that caecilians evolved from a small four-legged animal. This species would have searched for food in piles of leaves before eventually specializing and evolving into a true burrower.

The caecilians are estimated to have diverged from other amphibians around 370 million years ago, during the Devonian period.

Where Are Caecilians Found?

Caecilians are found in humid, tropical regions of the world. They have been discovered in East and West Africa, Southeast Asia, Bangladesh, India, Sri Lanka, Nepal, the Seychelles, northern and eastern South America and Central America.

About 75% of caecilian species are viviparous (give birth to live young), while the other 25% are oviparous (lay eggs). The eggs of the oviparous species are guarded by the female, and depending on the species, the hatchlings emerge either as larvae or as already metamorphosed* young.

* All amphibians undergo a change known as metamorphosis, in which their bodies change from their infant to their adult forms.

What Do Caecilians Eat?

It’s assumed that caecilians mostly prey on soil-dwelling insects and other invertebrates such as earthworms, termites and ants. Larger caecilian species may also feed on small frogs, lizards, snakes and even other caecilians.

Caecilians use their sharp, needle-like teeth for grasping their prey but always swallow their food whole.

Not enough is known about the elusive caecilians to determine how large the global population is and whether some or all of the species are in decline or not.

Caecilians are generally assumed to be rare, although some species appear to be at least locally abundant when searched for.