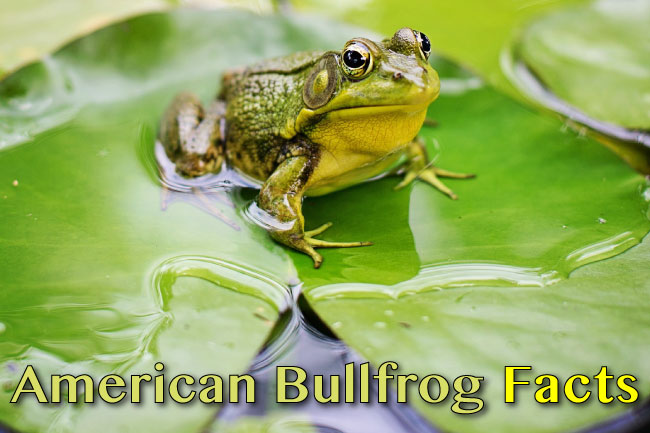 American bullfrog facts for kids, students and adults. The American bullfrog is a large frog found throughout North America. It is also present in many other parts of the world, having been transported by humans as a source of food and as a means of controlling agricultural pests.

In fact, the American bullfrog is considered an invasive species in many areas because its presence can be harmful to local wildlife.

The American bullfrog plays an important part in its native aquatic ecosystems. Let’s find out more about this awesome amphibian carnivore …

American Bullfrog Facts At A Glance

The American bullfrog is the largest frog native to North America. It has spread far and wide from its original range and is now considered an invasive species in many countries.

In fact, due to its success, American bullfrogs are sometimes hunted by conservationists in order to protect local wildlife.

The American bullfrog gets its English name from the male’s booming call, which is said to resemble the bellowing of a bull.

You can see (and hear) an American bullfrog performing its booming call in the video below:

The American bullfrog is a robust animal with short, sturdy front legs, long, powerful back legs, and webbed toes. The strong hind legs allow the frog to jump distances up to ten times its body length. 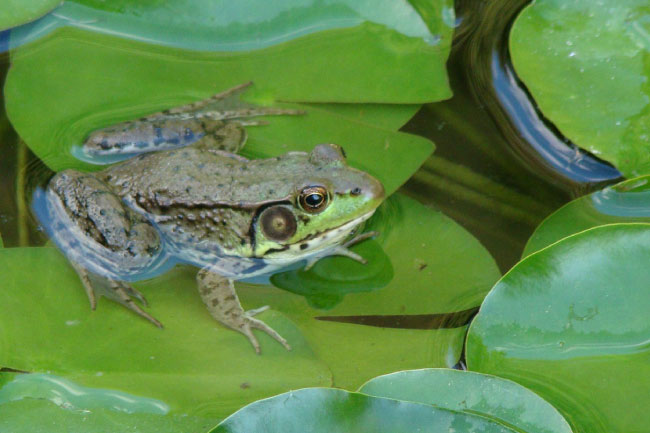 The frog’s large eyes protrude from the head, and its pupils are horizontal and almond-shaped. The frog’s large, circular eardrums (known as tympani) can clearly be seen behind its eyes.

The bullfrog’s skin is rough and covered with numerous tiny bumps. The color of individual frogs varies greatly from one location to another; bullfrogs may be bright green, olive green or brownish green.

The American bullfrog’s undersides are typically whitish and spotted with yellow or gray. The sides and limbs are marked with brown or gray bands and blotches. The upper lip is often bright green, in marked contrast to the pale lower lip. 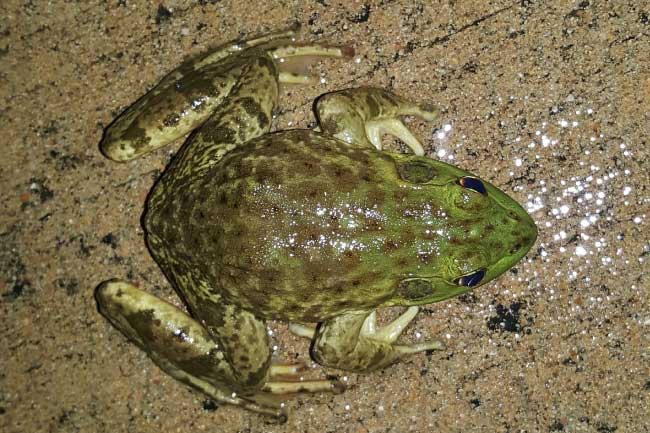 The American bullfrog is sexually dimorphic (i.e. males and females have substantially different physical characteristics). Males are smaller in size than females and have yellow throats. The males’ eardrums exceed the size of their eyes, whereas in females the eardrums and eyes are roughly the same size.

Males have pigmented ‘nuptial pads‘ on their thumbs. These are used to grasp and hold onto the female during mating.

American bullfrog tadpoles are large and yellow-green in color, and have dark spots.

The American bullfrog is a widespread species. It is native to the east of the United States and Canada, but has also been introduced into western North America as well as parts of South America, the Caribbean, Europe and eastern Asia.

American bullfrogs were originally transported outside of their native range as a source of food (frog legs), as pets, and also as a means of controlling insect pests. 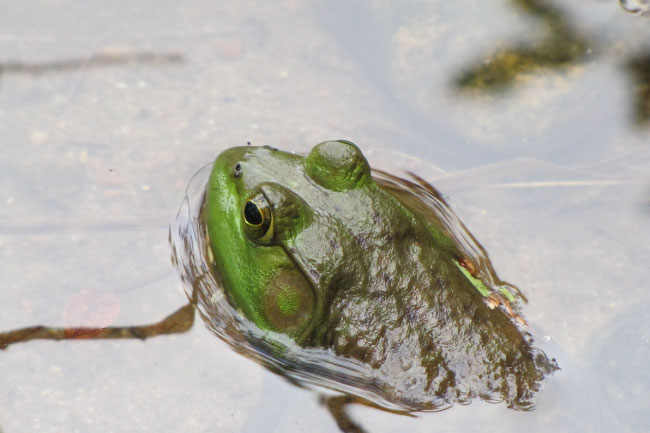 The American bullfrog is a highly aquatic species, only venturing away from permanent bodies of water in exceptionally wet weather. It can be found in a variety of water habitats, including lakes, ponds, swamps, reservoirs, stream margins and irrigation ditches.

The bullfrog requires relatively warm water for breeding and prefers still waters with abundant vegetation, although it can also be found in slow-moving streams.

During the winter months, the American bullfrog hibernates in the mud at the bottom of ponds and lakes.

The breeding season of the American bullfrog lasts for 2 to 3 months. This typically occurs in spring and early summer, although the exact timing varies depending on the climate.

Male American bullfrogs produce a distinctive loud call to attract mates. During the breeding season males form large groups known as choruses. The members of a chorus are in constant competition with their neighbors over the best positions within the group. Dominance is attained by visual displays and wrestling.

You can hear the distinctive call of the male bullfrog in the video below:

Older males tend to be the most dominant and have the greatest reproductive success.

Females are only receptive for a short time; perhaps as little as one night. Attracted by the male’s calls, they will approach him and enter the water. A male will grasp a receptive female and cling onto her back while she lays 10,000 to 25,000 eggs into the water. As she does so the male will fertilize them externally. The clutch size depends on the size of the female and is roughly equal to a quarter of her body weight.

The jelly-like eggs float on the surface of the water until they are ready to hatch. Hatching occurs within 3 to 5 days. The metamorphosis from tadpole to young frog can take anything from a few months to 3 years, depending on the temperature of the water.

What Do American Bullfrogs Eat?

The American bullfrog is an opportunistic predator, devouring almost any animal that it can fit into its mouth. Its diet includes other amphibians, small rodents, reptiles, fish, birds, earthworms, snails, spiders and insects. Cannibalism among bullfrogs is also common.

The American bullfrog is an ambush predator. It typically waits quietly for its prey to come close before launching forward with its mouth wide open and its sticky tongue extended. Any animal too large to fit into the mouth easily is helped in with the front feet.

Although mature American bullfrogs are carnivores, the tadpoles mainly eat algae and other plant matter and only occasionally feed on small aquatic invertebrates.

Although the skin of the American bullfrog secretes unpalatable toxic chemicals, the species is prey to many animals. Its predators include herons and other birds, otters, large fish, snakes and other amphibians.

When alarmed, bullfrogs retreat into deep water. If trapped or captured, the frog may make a sudden, loud sound. This can be enough to startle the predator into releasing the frog, allowing it to escape.

Is The American Bullfrog Endangered?

The American Bullfrog is rated ‘Least Concern‘ by the IUCN. A specialist IUCN group has also included the species among the 100 worst invasive species in the world.

The species is widespread and its global population size is increasing. There are no known threats to American bullfrogs, and outside of their native range, the animal is often considered a pest.

In some areas it has become a threat to native amphibian species, either as a competitor for resources, a potential predator or a transmitter of pathogens. In these areas, eradication programs have been established as a conservation priority.