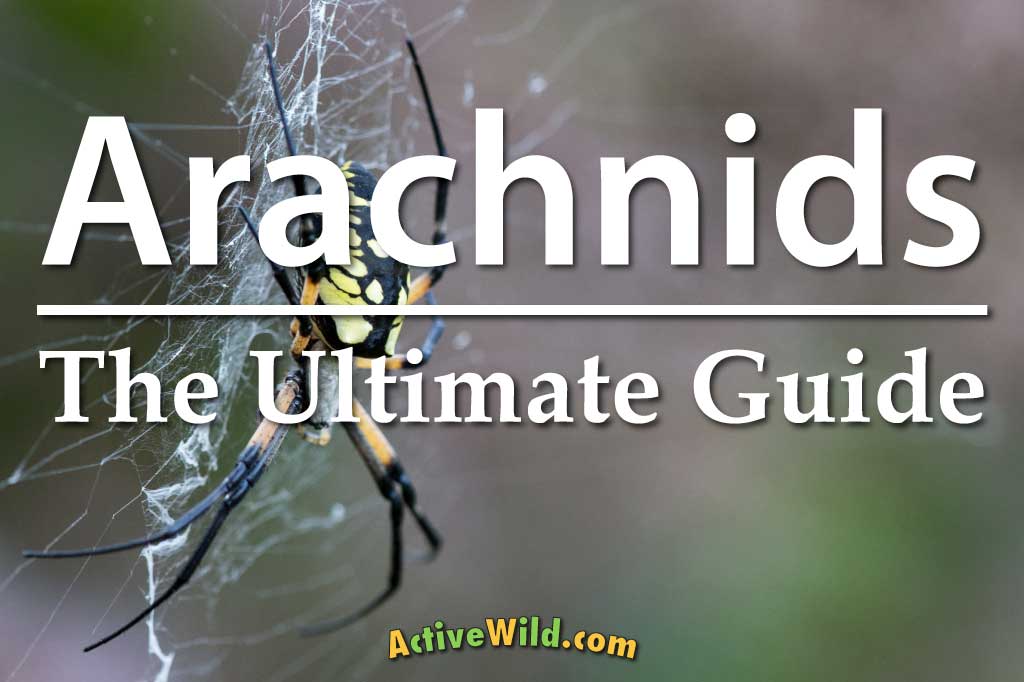 What is an arachnid? Spiders are the best-known arachnids, but this group of invertebrates also includes animals such as scorpions, mites and ticks.

On this page we’ll take a look at arachnid characteristics and lifestyles, and we’ll also meet the different types of arachnid.

What Is An Arachnid? Page Index

What is an Arachnid? The Ultimate Guide To Arachnids

An arachnid is an invertebrate animal in the class Arachnida. Arachnida itself is part of a larger group of animals known as arthropods.

A number of other characteristics distinguishes arachnids from other arthropods – we’ll take a look these in the ‘characteristics of arachnids’ section further down the page.

You can find out more about the different types of arachnids in the ‘Types of Arachnids’ section.

An Arachnid is an Arthropod

We’ve already found that arachnids are arthropods, but what exactly is an arthropod?

Today’s arthropods are extremely varied, not just in appearance, but also in lifestyle and the habitats in which they live.

However, if you go far enough back in the family tree of any living arthropod–be it insect, arachnid or crustacean–you’ll eventually arrive at the same animal. This common ancestor of all arthropods lived hundreds of millions of years ago.

There are over one million known species of arthropod. By far the largest group of animals within Arthropoda are the insects.

The arachnids are the second-largest class within Arthropoda, with over 110,000 known species.

Arachnids and related animals form a group called Chelicerata within Arthropoda. The animals in this group have specialized mouthparts known as chelicerae, from which the group gets its name.

(You’ll find out more about an arachnid’s chelicerae further down the page.)

Arachnids first appeared around 430 million years ago, during the Silesian Period of the Paleozoic Era.

Some of the characteristics of arachnids are shared with all other arthropods. These include segmented bodies, jointed legs (the name Arthropod means ‘jointed feet’) and an external skeleton (an exoskeleton).

Nearly all arachnids have eight legs, a characteristic that separates them from most other arthropods. Some myriapods have over 700 legs, and the arthropods in the subphylum Hexapoda (which includes insects) have six legs.

In addition to its eight legs, an arachnid has two further pairs of appendages: the chelicerae and the pedipalps. Both are attached to the arachnid’s head region and serve different functions depending on the type of arachnid.

Positioned near to the arachnid’s mouth are the chelicerae. These jaw-like structures are used for feeding and also serve as weapons. A spider’s chelicerae house its venomous fangs. The chelicerae of solifuges and scorpions are used to cut up prey prior to digestion.

An arachnid’s pedipalps are positioned outside of the chelicerae.

A spider’s pedipalps resemble small ‘arms’ positioned either side of the mouth. They provide sensory information and are also used by male spiders to transfer sperm to the female.

The pedipalps of a scorpion have evolved into pincers. These are used to grasp and manipulate prey and also serve as weapons.

An arachnid’s body is divided into two main parts, or ‘tagmata’. The front tagma is known as the prosoma, or cephalothorax. It houses the arachnid’s mouthparts, many of its sensory organs including the eyes, and is also the segment to which the limbs are attached.

The hind part is known as the abdomen. It contains the arachnid’s digestive, reproductive and respiratory (gas exchange, or ‘breathing’) organs.

A spider’s abdomen houses silk-producing organs known as spinnerets. These are used to produce the spider’s web.

The hind-part of the abdomen of a scorpion is its ‘tail’. It has five segments. A scorpion’s venomous stinger – known as a telson – is attached to the hind-most segment of its abdomen.

The prosoma and abdomen of a tick are fused together and are protected by a single carapace.

Unlike other arthropods, arachnids do not have antennae.

Most arachnids have multiple pairs of eyes, with a central pair and multiple secondary pairs. All of an arachnid’s eyes are ‘simple eyes’. A simple eye only has one lens (just like our own); arachnids don’t have the multi-lensed ‘compound eyes’ found in insects.

Some arachnids – in particular the jumping spiders – have very good eyesight. Most spiders have eight eyes.

How Do Arachnids Breathe?

Scorpions and some spiders possess organs known as ‘book lungs’, named after their resemblance to the pages of a closed book. Gases are exchanged between the air passing through the ‘pages’ and the arachnid’s blood.

Other arachnids possess a system of tubes known as tracheae within their bodies. These deliver air directly to body tissues.

Air enters an arachnid’s body via openings known as spiracles.

How Do Arachnids Eat?

Most arachnids are carnivores. They feed mainly on other arthropods, but some species may also target small vertebrates. The Goliath birdeater – the world’s largest spider by weight – is notorious for preying on birds (in reality this fearsome species feeds on a variety of invertebrates and small vertebrates).

Arachnids are unable to eat large pieces of solid food. While eating, they pre-digest their food by pouring digestive juices over the prey while it is being held in the chelicerae. The arachnid then sucks the liquid remains into its mouth.

Arachnids use pheromones, scent, and various mating rituals to locate and identify the suitability of potential mates.

The mating procedure itself is usually indirect, with the male depositing a package of reproductive material known as a spermatophore which is then transferred to the female. This process is slightly different in male spiders, who transfer sperm to the female using their specially-modified pedipalps.

In the case of scorpions, the female is maneuvered over the spermatophore by the male during a courtship ritual.

Most arachnids hatch from eggs laid by the female. Scorpions hatch from eggs which are not laid, but which instead develop inside the female’s body. A female scorpion then gives birth to live young, who are then carried around on the mother’s back until their first molt.

Because an arachnid’s exoskeleton is relatively inflexible, it has to be shed and replaced for the arthropod to be able to grow. The stages between molts are known as ‘instars’. 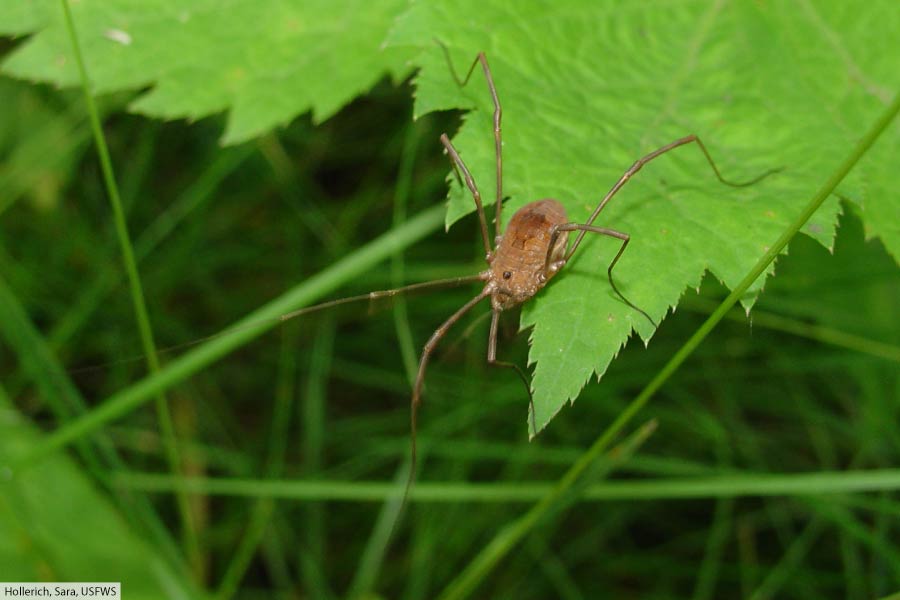 Despite their name, horseshoe crabs are more closely related to arachnids than they are to crustaceans. In fact, some biologists now regard horseshoe crabs as being true arachnids. The traditional view is that they are members of a closely-related group, Xiphosura.

The bodies of these large marine arthropods are protected by an armored shell known as a carapace. A long, hard spine projecting from the rear of the body is known as a telson. 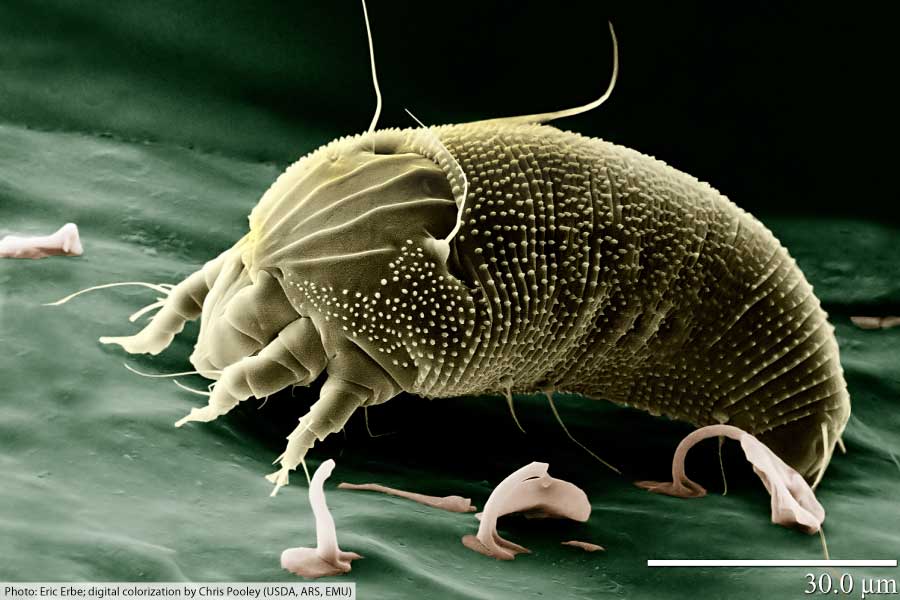 Along with the ticks, mites made up a group of arachnids known as Acari, or Acarina. Mites are 1 mm (0.04 in) or under in length. The segments of their bodies are fused and protected by a single carapace (shell).

Mites may either be herbivores, scavengers, or parasites. Mites are among the most frequently-occurring animals in soil and leaf litter, forming up to 10% of all invertebrates found there.

Some mites are known to damage crops and other plants. The best-known crop-damaging mite is the red spider mite Tetranychus urticae, which feeds on a wide range of commercial crops.

Mites of genus Trombicula are known as ‘chiggers’ in their larval stage. A chigger will crawl onto a variety of host animals (including humans) in order to feed on the animal’s skin. The mite injects digestive juices into the host’s skin and sucks up the resulting liquid. This causes inflammation and intense itching.

It’s highly likely that a microscopic mite, Demodex folliculorum, otherwise known as either the follicle mite or the eyelash mite, is present in your own hair right now!

Scorpions are distinctive arachnids with large pincers and a segmented tail, at the tip of which is a venomous stinger. They are mainly found in tropical and warm climates, but are present on all continents except Antarctica. They are also absent from New Zealand.

Although scorpions are much-feared due to their venomous sting, very few species are capable of inflicting serious harm. Even the stings of the most dangerous species (such as the Arizona bark scorpion of North American and the deathstalker scorpion of North Africa and the Middle East) are unlikely to be fatal to a healthy human. 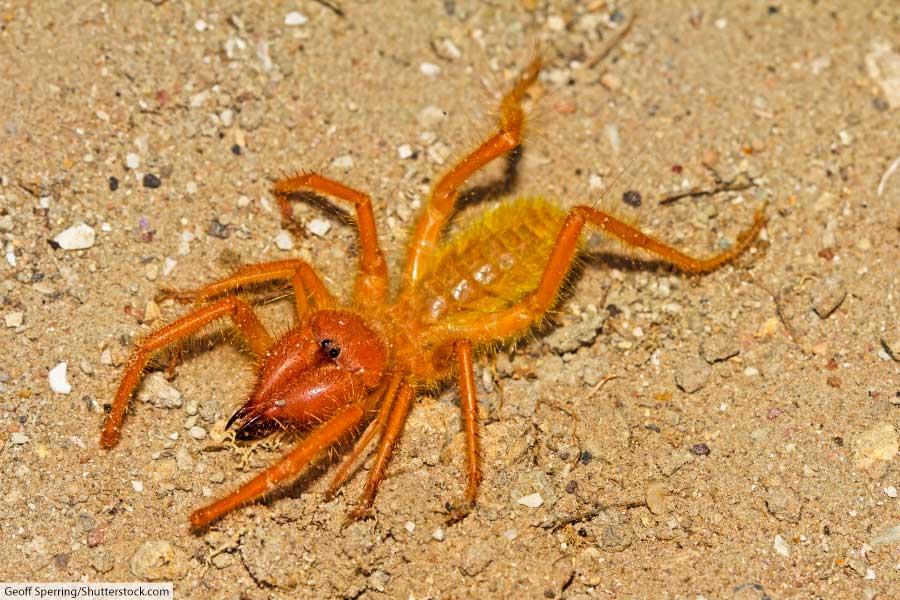 Solifuges go by a variety of different names, including camel spiders, whip scorpions and sun spiders. There are around 1,100 known species of solifuge, most of which inhabit dry habitats such as deserts. Solifuges are carnivorous, mainly preying on other arthropods.

Solifuges have long, leg-like pedipalps, which give them the appearance of having ten legs.

The largest solifuges reach lengths of around 15 cm (6 in), including the legs.

Large chelicerae give solifuges a fearsome appearance. Although they are capable of inflicting a painful bite, solifuges are otherwise harmless to humans. 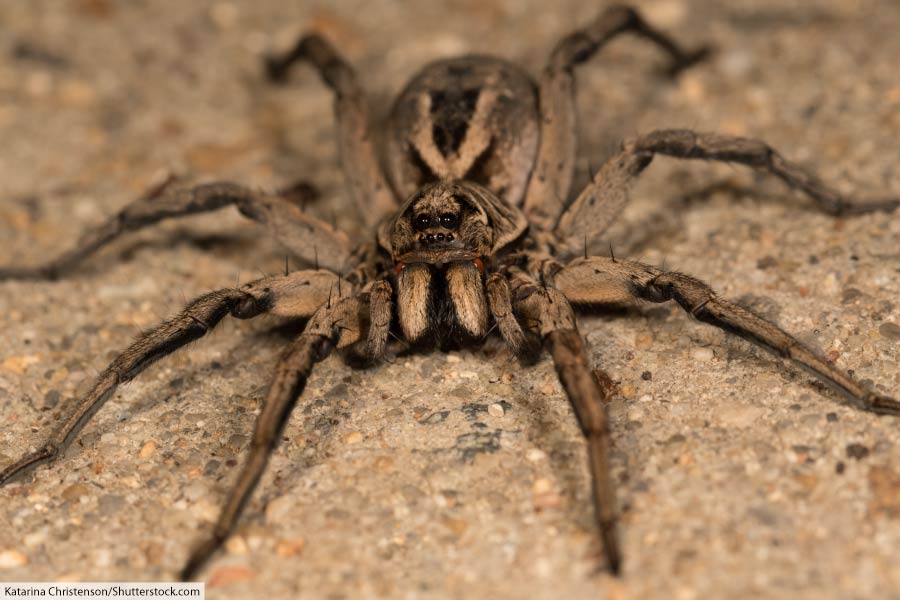 Spiders are arachnids in the order Aranae. With around 48,000 different species, spiders account for around half of all arachnids. Spiders are found on every continent except for Antarctica, and have adapted to live in many different habitats.

In most spiders the two-part arachnid body system is clearly defined. The front section (cephalothorax) is joined to the abdomen by a narrow structure called a pedicel.

The abdomen of all spiders is equipped with silk-producing organs known as spinnerets. Although not all spiders build webs to capture their prey, spiders use silk for a variety of other purposes, including building egg cases and ‘parachute lines’ that allow the spider to be carried over large distances by the wind.

Ticks, along with mites, make up the order Acari, or Acarina. These small arachnids are ectoparasites – parasites that live on the exterior of the host’s body. They feed on the host animal’s blood, their bodies often visibly swelling as they feed.

The largest ticks grow to lengths of up to 3 cm (1.18 in.), but most are no longer than 5 mm (0.19 in.). In their larval stage, ticks have six legs. The fourth pair of legs grows before the tick reaches maturity (this is also the case in mites).

Some people suffer from an irrational fear of arachnids (especially spiders); a condition known as ‘arachnophobia’. This fear is generally unfounded, as very few arachnids are dangerous to man.

Human fatalities resulting from bites or stings from even the most venomous spiders or scorpions are extremely rare, especially if prompt medical attention is received.

Treat arachnids with the respect they deserve, but don’t let their fearsome reputation put you off taking an interest in these amazing animals!

What Is An Arachnid? Conclusion

We hope that by now you’ve conquered any arachnophobia you may have felt at the beginning of the page! Arachnids are incredible, ancient animals that have been around a lot longer than mammals. They deserve to be respected rather than feared!