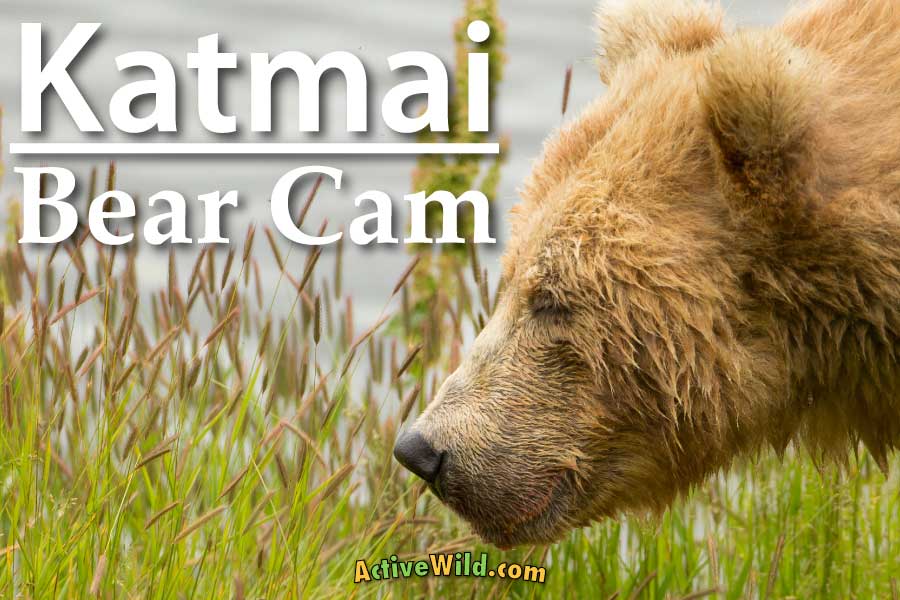 Click on the links below to go the section your require:

The Katmai bear cam is one of the world’s best-loved live animal cams. Broadcasting live from Katmai National Park in Alaska, the live bear cam allows millions of people all around the world to experience action from the park in real time.

For many people, the Katmai bear cam is the closest they’ll ever get (or want to get) to one of nature’s most impressive spectacles: the gathering of the park’s brown bears to feast on migrating salmon.

What Is The Best Time To Watch The Katmai Bear Cam?

The best time to watch the Katmai bear cam is in July, when activity at Brooks Fall (the best-known of several live cams in Katmai) is at its peak. At this time of the year, up to 25 bears may be seen fishing the falls at the same time.

Tuning in at any time between mid-spring and mid-fall will give you a good chance of seeing a bear.

Katmai’s brown bears are most active during the day, which may mean late-night or early-morning viewing is necessary for wildlife fans in other time zones.

If it’s night time, or if nothing much is happening on the live cam when you visit, you can go to an earlier point by clicking on the video and using the seek-bar.

The Brooks Falls bear cam is the best-known of several live cams broadcasting from Katmai National Park. Brooks Falls is a waterfall in the Brooks River.

At around 6 foot (1.8 m) high, the waterfall provides a natural obstacle for migrating salmon, who have to leap through the seething water in order to continue their journey upstream.

Waiting for the fish are Katmai’s brown bears, who make their way from far and wide in the park in order to take part in the annual feast.

The fish form an extremely important part of the bears’ diet and competition for the best fishing spots can be intense. Fights between rival bears can break out at any time. These encounters range from minor scuffles to full-on fights, and are all part of the Katmai live cam experience.

A secondary live cam gives viewers a slightly different view of Brooks Falls. On this cam you get the chance of a close encounter with a bear as it strolls past on its way to the fishing spot.

Brooks Falls is often the preserve of powerful adult male bears, which can be up to twice the size of adult females.

Around 100 yards downstream from Brooks Falls is an area of river known as Riffles. Here, immature and mother bears with cubs get a chance to take part in the salmon feast.

The park was established in 1918, and takes its name from Mount Katmai, a volcano located within the park. Much of the park’s unique landscape is the result of volcanic activity, in particular the 1912 eruption of the volcano Novarupta – the 20th century’s largest volcanic eruption.

* The ‘Preserve’ part of the title indicates that, unlike in a true National Park, some natural products may still be extracted from the area.

About The Brown Bears At Katmai

Katmai National Park is home to around 2,200 brown bears. Brown bears are the only bears commonly seen in the park. There has only ever been one documented sighting of an American black bear (Ursus americanus) in Katmai.

About The Salmon At Katmai

The salmon species found in Katmai National Park is the sockeye salmon (Oncorhynchus nerka). The species is also known as red salmon due to the color of its skin while spawning.

The sockeye salmon has a migratory lifestyle. After hatching, it spends one or two years in freshwater before making its way to the Pacific Ocean. Here it will spend another 2 to 3 years before heading back into freshwater – usually to the very river in which it hatched.

Once the salmon has reached its spawning grounds it will mate, then die, its life-cycle having been completed.

We hope that you have enjoyed finding out about the Katmai bear cams. Follow the links below for more information on the park, its animals, and other live animal cams.