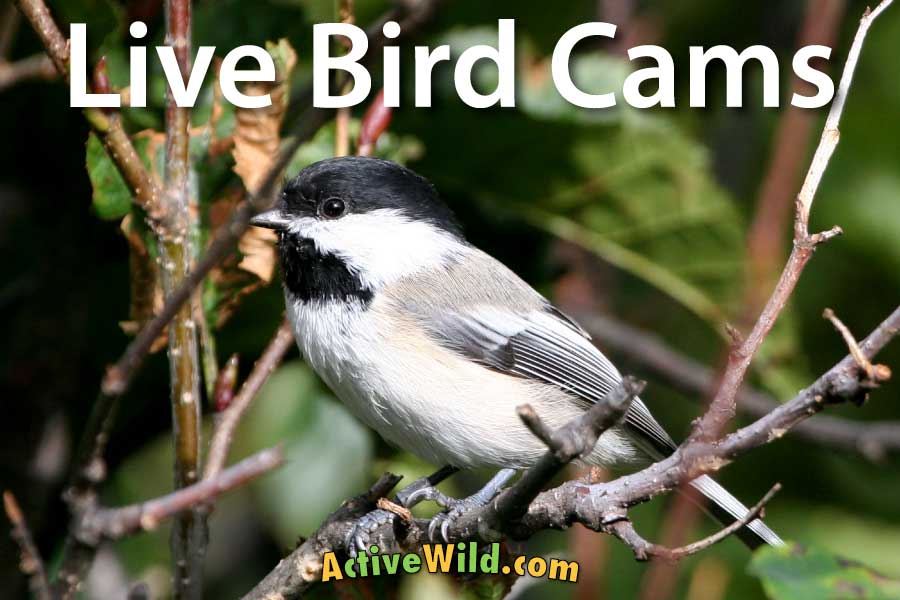 Cornell bird cams allow you to go birding without leaving your home! Watch live bird cams from all over the United States and beyond…

Choose which Cornell bird cam you want to view from the list below, or scroll down to see all of the cams:

You can see more bird and animal cams on this page:

The Cornell Lab of Ornithology is part of Cornell University, an Ivy League university based in Ithaca, New York (website). The Cornell Lab is dedicated to the study and conservation of birds and other wildlife.

As part of its mission, the Cornell Lab has set up a number of live bird cams enabling people from all over the world to enjoy and learn about bird life.

Cornell Lab bird cams are located not just at the lab’s site in Ithaca, New York state, but also in several other locations in the United States, as well as further afield.

On this page you can watch live streams from every Cornell live bird cam currently broadcasting.

In the comments section at the bottom of the page let us know which Cornell bird cam is your favorite, and how many species you were able to see!

If you enjoy these bird cams, please consider supporting the Cornell Lab’s work. You can find out more at their website: Cornell Lab of Ornithology

This live bird cam watches over a well-stocked bird table and various feeders located in Sapsucker Woods, a 226 acre conservation area and home of the Cornell Lab.

Sapsucker Woods is named after the yellow-bellied sapsucker, a species which also features on the Cornell Lab’s logo.

A breeding pair of yellow-bellied sapsuckers was first seen in the area in 1909 by the Cornell Lab’s founder, Arthur Allen.

Although not the most common visitor to the bird table, the yellow-bellied sapsucker is present in Sapsucker Woods.

The table overlooks a 10 acre pond and is positioned at the edge of woodland. The convergence of habitats ensures a varied selection of bird species.

The most common species seen on the Sapsucker Woods FeederWatch cam while we’ve been watching are red-winged blackbirds, blue jays, mourning doves and black-capped chickadees.

Gray squirrels are also frequent visitors to the bird table!

For several years, a pair of red-tailed hawks has been making their home in one of Cornell University’s athletic field’s lighting towers.

Naturally, the Cornell Lab positioned a live cam to watch over the nest in order to glean important information on the species’ behavior.

The live cam continues to operate outside of the nesting season, and birds may not be present all year round.

The West Texas Hummingbird Cam watches over hummingbird feeders located in Fort Davis, West Texas, almost the other side of the country from the Cornell Lab’s New York state home.

On this live bird feed you’ll see members of up to twelve different hummingbird species as they stop to refuel mid-migration.

This live bird cam is located atop a nesting platform at the Hellgate Canyon in Missoula, Montana. A female osprey named Iris has been nesting in this spot for many years.

This live cam operates outside of the nesting season, and birds may not be present all year round.

This live cam gives you the chance to see a variety of Central American species, including rufous motmots, bananaquits, collared aracaris, bay wrens, several tanager and hummingbird species and many more.

The Bermuda petrel – also known as the ‘cahow’ after its characteristic call, is an endangered species of seabird that forages in the western North Atlantic Ocean.

The species was once abundant on the British-owned island group of Bermuda. Due to over-hunting and the introduction of non-native species such as rats, the species’ population rapidly dropped.

The cahow was believed to have become extinct early in the 17th century.

The identification of a number of surviving individuals and the discovery of a small colony of cahows in the mid-twentieth century brought the species ‘back from the dead’. Since then the species has been the subject of several conservation efforts.

The Cornell Lab’s Cahows cam is located on Nonsuch Island (Wikipedia). The cam is focused on the nest of a cahow pair that have been nesting in the same spot since 2009.

Several different views of the nest are available.

We hope that you have enjoyed watching the birds and other animals on these bird cams. Remember, you can support the work of the Cornell Lab of Ornithology by becoming a member. More information can be found at their website.