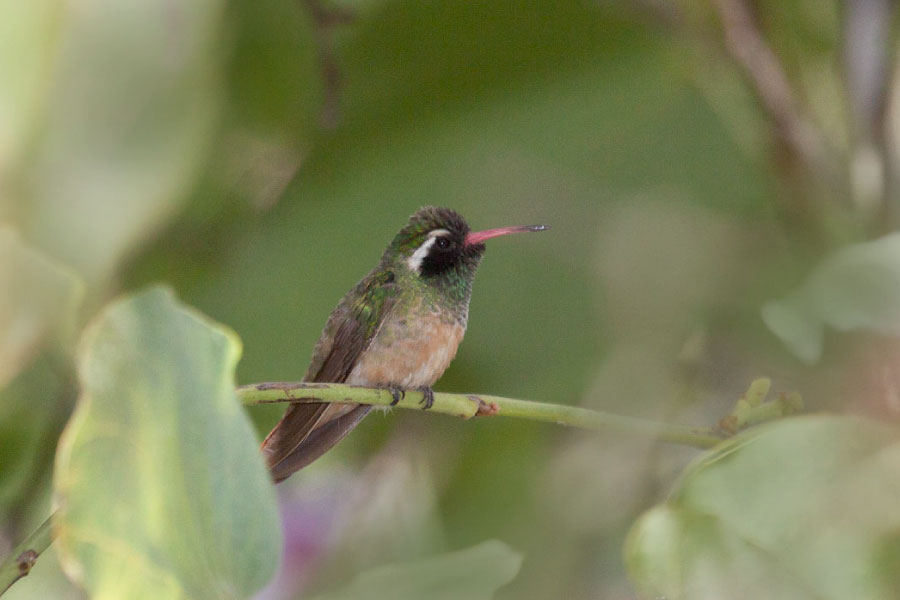 Xantus’s hummingbird facts, pictures and information. Read on to find out about this species, which is only found in Baja California, Mexico…

Xantus’s Hummingbird Facts At A Glance

Xantus’s hummingbird is named after the Hungarian zoologist John Xantus de Vesey (see Wikipedia). Like all hummingbirds it is a small nectarivore (nectar-eating animal) capable of hovering and flying in all directions, including backwards.

This Mexican species is rarely seen in the United States.

How To Recognize Xantus’s Hummingbird

Xantus’s hummingbird is a mid-sized hummingbird. Its back is predominantly emerald green, its undersides buff and its tail rufous.

The face is dark and has a white stripe running over the top of the eye to the back of the head. The forehead of the male is darker than that of the female. The bill is red with a black tip.

The buff underparts, rufous tail and slightly curved bill of the Xantus’s hummingbird can be used to tell the species apart.

Where Is Xantus’s Hummingbird Found?

Xantus’s hummingbird is endemic to (only found in) Baja California, a state in northeast Mexico which borders the U.S. state of California to the north.

Very occasionally Xantus’s hummingbird is seen in the United States, with sightings being reported around once every two years, usually in California.

Xantus’s hummingbird lives in a variety of habitats, including mountain forests, forest clearings, and woodlands. The species is also seen in gardens and will come to feeders.

The species is little-studied and as a result not much is known about its life-cycle and behavior.

Hummingbirds make up the family Trochilidae. There are currently 359 recognized species of hummingbird (source).

Hummingbirds are only found in the Americas. They are nectarivores (nectar-eating animals) who co-evolved with flowers.

The relationship between hummingbirds and flowers is beneficial for both parties. Hummingbirds help flowers to reproduce by spreading their pollen. In return, flowers provide hummingbirds with nectar, a sugar-rich liquid.

Hummingbirds get their name from the humming sound produced by their wings as they fly. Hummingbirds have a unique anatomy and flying style. Their wings make a figure of eight movement, and beat remarkably quickly (usually between 10 to 80 beats per second, with some species having been recorded at 200 beats per second).

The hummingbirds’ unique flying style means that as well as being able to fly forwards, they can also hover and fly backwards and sideways.