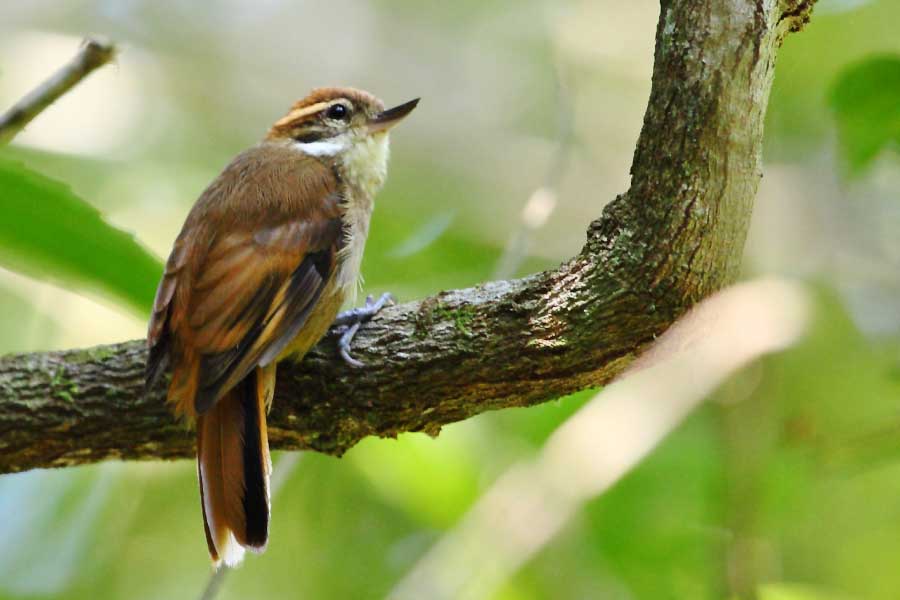 This page contains xenops facts, pictures and information; read on to find out more about these interesting rainforest birds…

Xenops is a group of small birds found in Central and South America. Rather than being a single species, Xenops is a genus – a group of closely-related species.

Two other birds in the same family have the word ‘xenops’ in their names: the rufous-tailed xenops and the great xenops.

All of the above birds are in the family Furnariidae. Members of this family are known as ‘ovenbirds’. This is because some members of the family – known as ‘horneros’ – build rounded, clay nests that resemble ovens.

Xenops are characterized by their small size, relatively long tails, thin but deep bills and brown / rufous-brown coloration. They move in all directions over the surface of trees while foraging for insects. Unlike woodpeckers, they don’t use their tails as props as they probe the bark.

Due to their small size and inconspicuous plumage birds of genus Xenops are often overlooked and can be difficult to see.

Birds in the genus Xenops are found in the tropical and subtropical rainforests and swamps of South and Central America.

The slender-billed xenops is a small bird found in the tropical rainforests and tropical swamps of South America. The species is present in the Amazon rainforest and in the foothills of the Andes. It is rare within its range, and most often seen as part of small, mixed-species flocks.

The tail and back of the slender-billed xenops are mainly red-brown in color. There is some streaking on its back and chest. Its undersides are pale and its face is marked with two white stripes; one above and one below the eye.

Unlike other Xenops, the plain xenops lacks streaking on its back and chest. Its back and tail are chocolate-brown, its underparts a uniform pale brown. It has white stripes above and below its eyes on either side of its face and an upward-curving bill. Its total length is around 11 to 12 cm.

The plain xenops is found in tropical forests in Southern Mexico, Ecuador, northeast Argentina and Brazil. It is usually solitary but relatively common within its range.

The back and tail of the streaked xenops are brown / rufous-brown. Both the chest and forehead are brown with pale streaks – hence the species’ name. The beak is short and wedge-shaped.

The streaked xenops is found from Costa Rica southwards into South America. It is found in forests in hilly and mountainous regions. It is less-likely to be seen in tropical lowland forests than the similar slender-billed xenops.

The rufous-tailed xenops was once included in the genus Xenops, but genetic research led to its being placed in its own genus: Microxenops. Its bill is wider than that of ‘true’ xenops, and it lacks a distinct pale ‘malar stripe’ (the stripe that projects back and downwards from the base of a bird’s bill, ‘separating’ the cheek and throat.

As its name suggests, the rufous-tailed xenops has a reddish-brown tail. Its chest is pale with darker streaks. Its back is chestnut-brown and its forehead has dark streaks.

The species is found throughout most of Amazonia, and is fairly common in some parts of its range.

The great xenops, despite its name, is not a ‘true’ xenops. With a length of around 16 cm (6 in.) it is larger than the species in the genus Xenops. Its back, chest, head and tail are orange-brown and it has a white throat. Its bill has a slight upwards curve.

The great xenops is endemic to (i.e. only found in) the Caatinga (an arid region with thorny vegetation) of northeastern Brazil.

You can continue your exploration of the animal kingdom on the following pages: