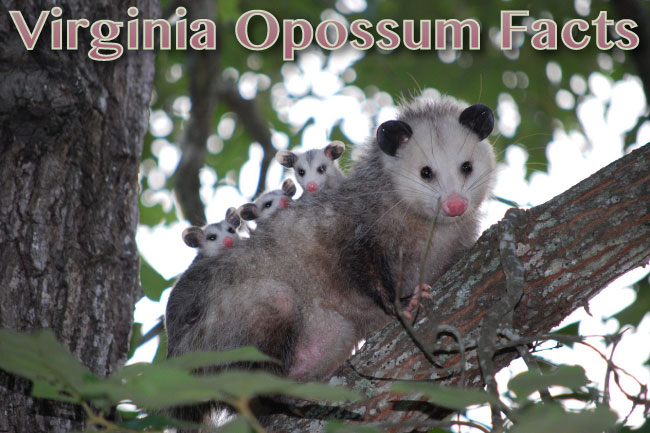 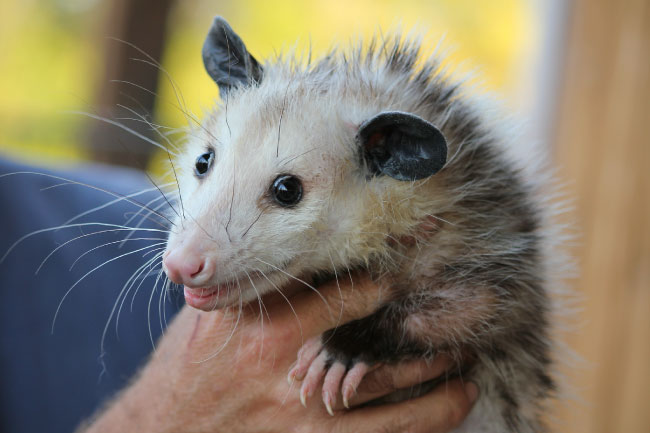 The Virginia opossum is the only marsupial that occurs naturally in the United States and Canada. It was the first animal to be called ‘opossum’ – the possums of Australia derive their name from their likeness to the Virginia opossum.

The Virginia opossum has a thick body, short legs and a long prehensile tail that it uses to grasp and carry small objects – it can even briefly hang by its tail. Its muzzle is long and pointed, and in its mouth are 50 teeth; more than any other land animal in North America.

The Virginia opossum is unusual in that it has a clawless, opposable ‘thumb’ on each of its rear feet. If you find animal tracks which have four clawed toes pointing forwards and a fifth, clawless inside toe pointing inwards or even slightly backwards, then you’ll know a Virginia opossum has been past! Its front feet have five clawed toes.

The face of the Virginia opossum is white, while the rest of its fur varies in color from grayish to shades of brown, red and black. The tail, ears and toes are hairless.

An adult Virginia opossum reaches roughly the size of a domestic cat. However, adult size varies greatly: males tend to be larger than females, northern specimens outgrow those in the tropics and the Virginia opossums living near urban areas tend to be heavier than their rural counterparts.

You can see what the Virginia opossum looks like in the video below:

In the United States the Virginia opossum is found east of the Rocky Mountains and in Canada in southwestern Ontario. There are also introduced populations along the West Coast of the United States and in British Colombia, Canada. The species appears to be spreading further north.

The Virginia opossum is a solitary, nocturnal animal that is active between dusk and dawn. It uses abandoned burrows, hollow logs, tree cavities, woodpiles and buildings for shelter during the day, moving from one denning site to another frequently.

The Virginia opossum doesn’t hibernate in winter, but will seek shelter during extremely cold weather to avoid frostbite to the hairless parts of its body.

The Virginia opossum is a competent climber and swimmer and can reach a running speed of 4.6 mph (7.4 km/h).

The Virginia possum is well-known for playing dead when it is threatened. The species’ behavior gave rise to the phrase ‘playing possum’.

A threatened Virginia opossum typically reacts to danger by baring its teeth and growling, but under extreme stress it may fall into an involuntary coma-like state.

Virginia opossums use both vocal and scent signals to communicate with each other.

Females communicate with their young by producing various sounds from lip smacking to bird-like noises, while a series of ‘clicks’ is used by mothers as well as individuals communicating with a mate. During an aggressive encounter, opossums may hiss, growl or screech.

Males have scent glands that produce a musky odor just before the mating season, while female scent glands guide newborn young towards the pouch.

The breeding season of the Virginia opossum falls between December and October, and the majority of young are born between February and June.

At birth, the young are comparable in size to a navy bean: they’re about 14mm long and weigh between 0.13 and 0.2g. Many of the newborn fail to find their mother’s pouch or to latch on to one of her 13 nipples. The nipple expands when the baby opossum begins to feed, effectively attaching the newborn to its mother.

The females have from 1 to 3 litters per year, each consisting of up to 30 young. On average, 8 to 9 young survive in the pouch, where they stay attached for about 2 months.

After they leave the pouch, the young will either climb onto their mother’s back or stay behind in a den while she forages. At 4 or 5 months of age, the young opossums are ready to strike out on their own.

What Do Virginia Opossums Eat?

The Virginia opossum is an omnivore (i.e. it eats both plants and meat) that eats a wide variety of foods. Its diet includes grasses, leaves, grains, seeds and fruits, together with animals such as insects, earthworms, snails and other small mammals, birds, reptiles and amphibians. In suburban environments Virginia opossums will also eat pet food and garbage.

Is The Virginia Opossum Endangered?

The Virginia opossum is rated as ‘Least Concern’ by the IUCN.

Despite a fairly short lifespan of 1.5 to 2 years and a high mortality rate, the species is common and widespread throughout its range.

Human impact on their numbers seems to be small, and the species generally thrives near human settlements. Most deaths related to human activity are caused by collisions with vehicles on roads.

We hope that you have enjoyed finding out about the Virginia opossum. Check out the related articles and discover more about the animal kingdom!

1 thought on “Virginia Opossum Facts, Pictures, Video & Information. Learn About The Only Marsupial Found In The USA.”