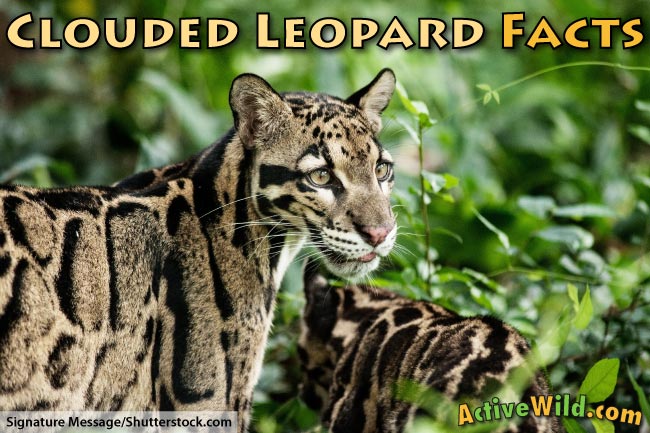 This page contains clouded leopard facts for kids and students. This animal is part of the Active Wild Online Zoo, which features animal information, pictures and videos. Visit today!

Clouded Leopard Facts At A Glance

Watch the video below to see clouded leopards in action:

The clouded leopard is found in forests in Southeast Asia and China. It has several adaptations for forest living, including an extra-long tail and flexible paws that enable it to climb head first down trees.

Neofelis nebulosa brachyuran, which was found in Taiwan, is now thought to be extinct.

The clouded leopard gets its name from the large, cloud-like patterns on its pale yellow coat. It also has dark spots and lines on its face, legs and tail.

The clouded leopard is a medium-sized wild cat. It is significantly smaller than all of the other members of the cat subfamily Pantherinae except for the closely-related and similarly-sized Sunda clouded leopard.

The clouded leopard has the largest canines in proportion to body size of any cat. The upper canines can grow up to 2 inches (5.08 cm) long.

The clouded leopard can open its jaws at a 100% angle!

Is The Clouded Leopard A Leopard?

It is thought that the clouded leopard ‘branched off’ from the other members of the Pantherinae subfamily over 6 million years ago.

Is The Clouded Leopard A Big Cat?

By most definitions, the clouded leopard is not a ‘big cat’. The term is usually used to refer to the four members of the Panthera genus that are able to roar, namely the lion, tiger, leopard and jaguar.

(The snow leopard is the only member of the Panthera genus that is unable to roar, and is therefore not a ‘big cat’.)

However, the term ‘big cats’ is not scientific. It is occasionally expanded to include all the members of Pantherinae, and also non-Pantherine cats such as cheetahs and cougars.

Where Do Clouded Leopards Live?

Clouded leopards are found in the foothills of the Himalayas in northern India and Nepal eastwards to China, where they are found south of the Yangtze River.

The clouded leopard is usually found in tropical forests. It is also occasionally found in grasslands and mangrove swamps.

The clouded leopard is able to bring down animals bigger than itself using a combination of stealth, strength, and those extra-long canine teeth!

The clouded leopard is primarily nocturnal or crepuscular (active at dawn and dusk). It is an excellent climber, and spends much of the day resting in the trees. However, it comes down to the ground at night in order to hunt.

If there are tigers or leopards in the same area, the clouded leopard is thought to spend more time in the trees, and to only come down at night.

The clouded leopard is solitary, and only seeks out other clouded leopards in order to mate. Although not much is known about the lifestyle of a clouded leopard, it is thought that, like other cats, it is territorial and uses scent marks to mark out its territory.

The clouded leopard communicates using a number of sounds, including mewing, growling and hissing. It also makes a low, breathy snorting sound called prusten. This sound, which is also made by snow leopards and tigers, is a non-threatening greeting. It is used by courting pairs and by mothers comforting their cubs. It is also known as ‘chuffing’.

Captive cats and their keepers have been known to chuff at one another as a greeting!

Clouded leopards reach sexual maturity at 2 years of age. Males and females come together for a number of days. Females are pregnant for around 90 days, and usually give birth to litters of 2 or 3 cubs. Males play no part in the rearing of the young.

At first, the cubs are helpless. Born blind and toothless, they are totally reliant on their mother’s care. After 10 days their eyes open, and in around 3-4 months they are fully weaned (no longer drinking their mother’s milk). They will stay with their mother for 18 – 24 months.

Although the clouded leopard is found across a wide area, its population is extremely scattered and scarce. It is rated by the IUCN as ‘vulnerable’.

The clouded leopard is threatened by habitat loss; the area in which it lives has one of the world’s fastest deforestation rates.

Hunting is also responsible for the animal’s Vulnerable status. The clouded leopard is hunted not just for its fur, but also for its bones, which are used in medicines, and its meat. Some clouded leopards are also taken for the pet trade.

If you want to help endangered cats, get in touch with a local charity, such as the Big Cat Sanctuary, to see what you can do!