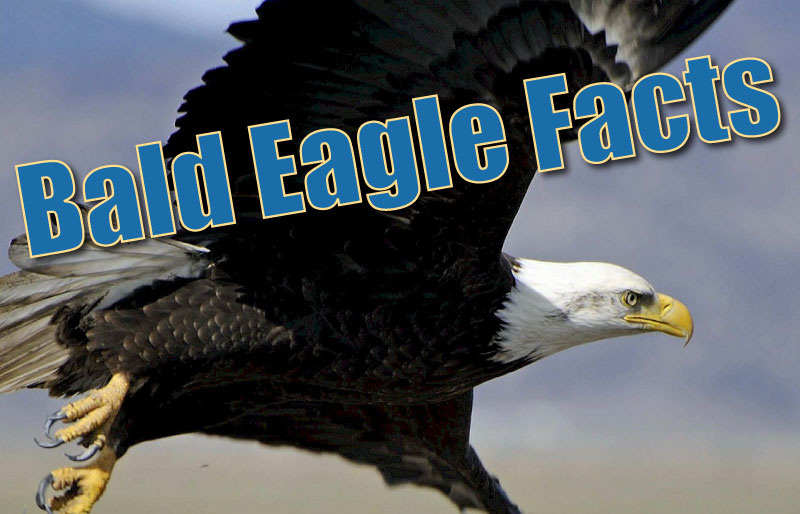 Anyone who has ever seen a bald eagle soaring through the sky will tell you what an awesome experience this is. These large, majestic birds are a symbol of freedom all around the world.

Bald eagles are the national bird of the United States of America. On this page we’ll find out where they live, what they eat and much more, including 10 amazing bald eagle facts for kids…

It is winter in Alaska. A fisherman stands alone in the middle of a vast frozen lake.

He has cut a hole in the ice, and is dangling his lure into the cold water below.

Suddenly he gets a bite! His rod bends double and he starts to reel in a good fish.

He doesn’t know it, but something is watching him. Another hunter, a creature with eyesight eight times better than his own. A bald eagle.

He pulls out the fish, unhooks it, and puts it onto the ice next to him.

Happy with his catch, he begins to pack up his gear.

The bald eagle swoops out of a tree and glides low over the frozen lake. Its powerful talons grasp the fish in one graceful motion. The powerful bird then flies back to its perch.

The fisherman looks round. Had he heard something? And where has his fish gone?

Where do bald eagles live?

Bald eagles are the only eagles unique to North America. Eagles are most often found near rivers, lakes, and sea coasts. While migrating (the movement of animals from one region to another according to the seasons), eagles pass over plains and mountains.

What is the bald eagle’s scientific name?

There are so many different kinds of eagles, how can I identify a bald eagle?

Bald eagles are dark brownish black. Males have a white head, females are simply dark all over. Their feet and legs are a bright yellow. Young eagles are brown with white spots, and do not get their adult feathers until they are between three and five years old.

Bald eagles’ bodies are two to three feet long. Bald eagles weigh six to eight pounds. The female is larger than the male, and has a longer wingspan.

How long do bald eagles live?

Bald eagles in captivity have lived to 50 years old, but in the wild they live much shorter lives. The average lifespan of a bald eagle in the wild is around 20 years.

What do bald eagles eat?

With a strong, hooked beak and excellent eyesight a bald eagle is a predator fish and small animals don’t want to mess with. The hooked beak helps to spear the prey and rip into the meat.

Eagles love fish, and literally snatch them right out of the water. Small animals, and waterfowl are also a part of the bald eagle’s diet. They are known to steal an osprey’s dinner. The bald eagle swoops down and grabs the osprey, forcing it to release it’s prey. This makes an easy dinner for the bald eagle. Other “fast food” for these majestic creatures might include road kill. In captivity, bald eagles eat rats, or chicks sprinkled with vitamin powder.

How fast do bald eagles fly?

When gliding, bald eagles can reach speeds of 40 kilometers an hour, roughly 65 miles an hour. When diving after prey, they can reach speeds of up to 160 kilometers an hour, or 100 miles per hour. Bald eagles use thermal convention currents to soar to 3000 feet high, there they glide for hours, using the current to take them where they need to go with minimal effort. Bald eagles often use these currents to help them migrate.

Are bald eagles an endangered species?

Bald eagles were on the endangered species list until 2007. Pesticides were a main cause of the decreasing numbers among bald eagles. With the help of conservationationists, government leaders, and people just like you, the bald eagle is no longer an endangered species. People all over North America are able to enjoy this beautiful raptor (bird of prey).

Learn about more amazing animals on our Artic Animals page.

Learn more about birds at the Cornell Lab Of Ornithology.