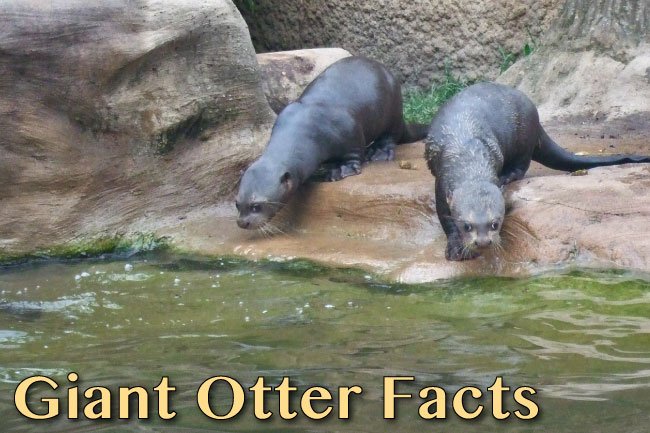 Giant otter facts, pictures, video and in-depth information. This carnivorous mammal inhabits the rainforests of South America. Habitat loss and over-hunting have caused it to become endangered, and it is now found in only one-fifth of its original range. Let’s find out more about the giant otter …

Giant Otter Facts At A Glance

Two subspecies of giant otter are currently recognized: P. b. brasilensis and P. b. paraguensis. 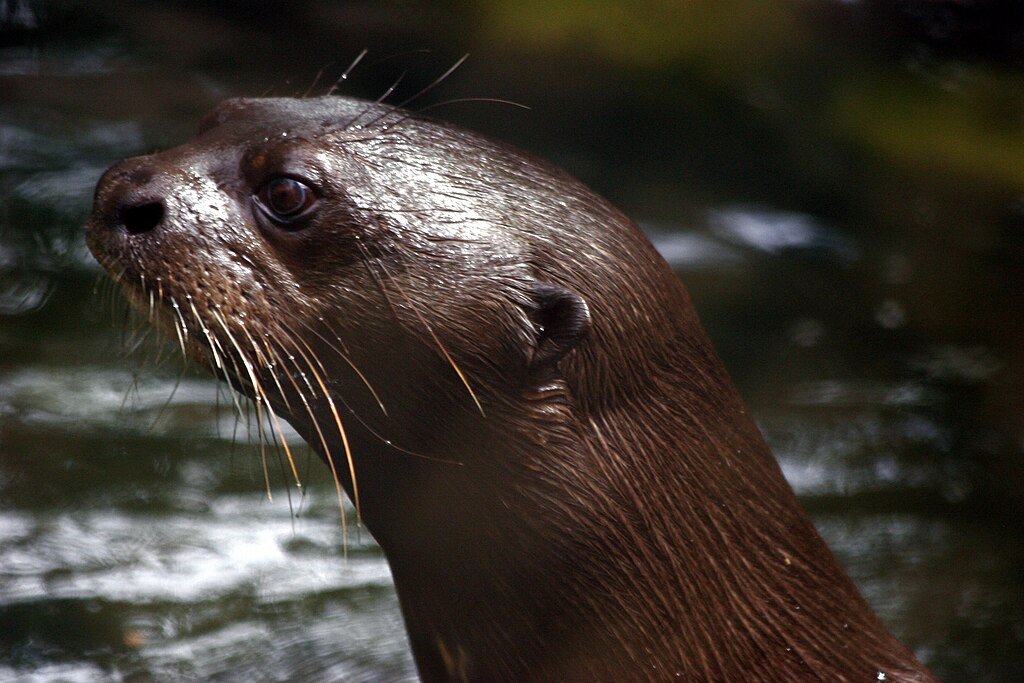 The giant otter is typically weasel-like in appearance and has many adaptations to living in water.

It has a slender, muscular body, a long, lance-shaped tail and short legs with webbing and strong claws. The head is flattened, and has a short muzzle, large eyes, small ears and sensitive whiskers.

The giant otter can close its ears and nostrils when underwater.

Although the sea otter’s fur is the shortest of all otters, it is extremely dense. The quality of the giant otter’s coat has led to the species being targeted by fur hunters. This has in turn contributed to the animal’s endangered status.

The throat and chin of a sea otter are marked with white or cream blotches in a pattern that is unique to each individual.

The range of the giant otter covers most of north-central South America, and includes the Amazon, Orinoco and La Plata river systems.

Although its range is large, the giant otter’s population is sparsely distributed and the species is today only found in a fifth of its original range.

The giant otter is found in a variety of lowland freshwater environments, including slow-moving freshwater rivers and streams, flooded forests, lakes and swamps. It is occasionally even spotted in agricultural canals, reservoirs of dams and roadside drainage channels.

It prefers areas with a high density of fish and gently-sloped riverbanks with dense vegetation.

The giant otter is unusually sociable for a mustelid (member of the weasel family). It lives in family groups of 2 to 20 individuals (typically 3 to 8). These consist of a dominant breeding pair, their offspring from several litters, and sometimes unrelated non-breeding adults.

Family groups are highly cooperative and members will travel, sleep, play and hunt together.

The giant otter is generally a peaceful species and will usually avoid conflict. However, giant otters are known to get aggressive when defending a territory.

Territories are marked with urine and secretions from scent glands and are typically defended by adult males.

Each family group produces one litter per year, occasionally two. Most young are born during the dry season, though giant otters can mate any time of year.

The gestation period lasts roughly 64 to 77 days, after which the female gives birth in an underground den. Each litter consists of 1 to 6 cubs, although litters larger than 4 are rare in the wild.

Cubs are looked after by both parents as well as older siblings. The young begin to hunt at 3 or 4 months of age and are weaned at 6 months.

By the time they are 10 months old the young giant otters are efficient hunters. Sexual maturity is reached at around 2.5 years of age.

The giant otter is a noisy animal with a diverse range of vocalizations (vocal sounds). A total of 22 distinct sounds used by adults and 11 by the young have been reported.

The sounds range from fast ‘hah’ barks and explosive snorts to low growls and whistles. The various vocalizations are thought to communicate danger, aggression, reassurance and curiosity.

What do giant otters eat?

The diet of the giant otter consists almost entirely of fish, including cichlids, characins (such as piranha) as well as catfish.

When there isn’t enough fish, the giant otter will also feed on small caimans, crabs and turtles as well as anacondas and other snakes. A giant otter will consume roughly 3kg (7lb) – about 10% – of its body weight per day.

The giant otter is known to hunt alone, in pairs and in groups. It prefers to hunt in shallow water, using its keen vision to locate the prey which can be attacked either from above or below. The prey is held in the otter’s forepaws and eaten immediately.

Other species competing for food resources with the giant otter include the neotropical otter (Lontra longicaudis) and various caimans.

Apart from humans, few predators threaten the giant otter. There are reports of caimans preying on giant otters, and historical reports indicate that solitary individuals may be attacked by the jaguar, cougar and anaconda.

Is The Giant Otter Endangered?

The giant otter is rated ‘Endangered’ by the IUCN.

Excessive hunting for its pelts until the late 1970s caused the numbers to plummet. The species is now legally protected, but the remaining population is highly fragmented across the range and most subpopulations are small.

The behavioral patterns of the giant otter make it an easy target for humans, and its late breeding age and low cub survival make it particularly vulnerable to local extinctions.

The main threats to the giant otter include:

If you have enjoyed reading about this ferocious rainforest predator, you may find the following articles interesting …