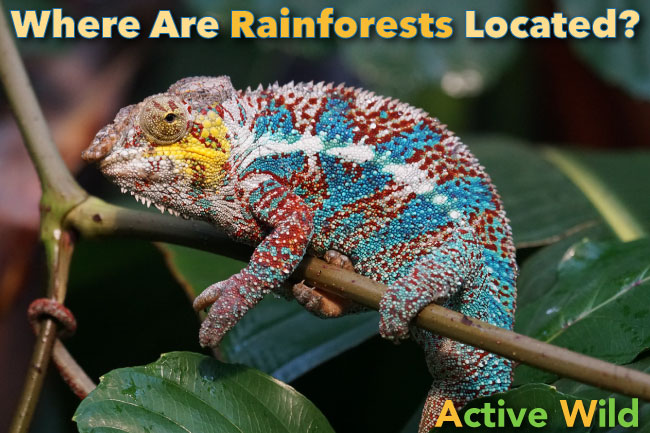 Where are rainforests located? In this article you’ll find a list of the world’s rain forests. You’ll also find maps and information about notable animals found in each region.

What Is A Rainforest?

A rainforest is simply a forest located in a region that has a lot of rain.

Some definitions go further, specifying that a rainforest should have at least 180 centimetres (71 in) of rainfall in a year. This is the minimum amount: some rainforests have much more rain, with yearly averages of over 250 cm (100 in).

As we found in our main rainforest facts page, there are two main types of rainforest: tropical and temperate.

Tropical rainforests are located in tropical regions. These are the regions on or near the Earth’s equator, between the tropics of Cancer and Capricorn.

Typical rainforests, such as those found in the Amazon and Congo regions, are ‘lowland broadleaf forests’.

There are several other types of tropical forest:

Temperate rainforests are located further away from the equator than tropical rainforests, but where rainfall is just as high.

Most of the rainforests in this list are tropical rainforests. We’ll have a look at some famous temperate rainforests further down the page.

Where Are Rainforests Located in Africa?

The continent of Africa is famous for its savannah, where animals such as lions, zebras and rhinos roam. However, there are also many rainforests located in Africa, including the Congo Rainforest.

The map below shows where African rain forests are located.

Over 3 ½ million square kilometres of Africa is tropical forest.

Africa’s rainforests are under continual threat. Up to 90% has already been lost to deforestation, and more is disappearing every year.

In West Africa, rainforests grow in a band that stretches south east from Senegal down to Gabon. Here they meet the mighty Central African rainforests.

A Biodiversity Hotspot is an area that has a high amount of biodiversity (lots of different species) which is also under threat from human activity.

The Upper Guinean Forests cover parts of Guinea and Sierra Leone in the west and Liberia, Côte d’Ivoire, Ghana and Togo in the east.

The Lower Guinean Forests start in the east of Benin, and cover parts of Nigeria and Cameroon. They join the Central African forests south of the Sanaga River in Cameroon.

Animals that live in the West African Rainforests include the Pygmy Hippopotamus, African Elephant and Jentink’s Duiker (a species of antelope). All of these animals are classified as ‘Endangered’ on the IUCN Red List.

Central Africa’s Congo rainforest is located in the region that forms the basin of the river Congo. (The ‘basin’ of a river is the area that drains into the river).

The Congo rainforest is the world’s second largest rainforest.

The Congo rainforest is home to endangered animals such as Gorillas, Bonobos, and the mysterious Okapi. African elephants are also found here.

In 2007, the Ugandan government announced plans to convert one third of the country’s Mabira rainforest into sugar cane plantations. People demonstrated against this and forced the government to change its mind.

East African rainforests are home to many primate species, including Chimpanzees and Mountain Gorillas. Birds found in the region include Hornbills and Turacos.

Madagascar is an island country that lies in the Indian Ocean off the east coast of Africa. It is the world’s 4th largest island, and is about the size of France.

On this incredible island, around 90% of plant and animal species are ‘endemic’ – which means that they aren’t found anywhere else!

Madagascar’s tropical rainforests are found on the east side of the island, stretching from the coast to the mountainous central regions. Most of Madagascar’s endemic species can be found in this region.

Madagascar is famous for its Lemurs; small monkey-like primates which are found nowhere else on Earth. Nearly all of the lemur species are now rated as either Vulnerable, Endangered, or Critically Endangered.

Other endemic Madagascan species include the cat-like Fossa, and birds such as the Couas.

Where Are Rainforests Located in Asia?

The map below shows the location of rainforests in Asia.

India has several rainforest regions, but, like many other countries, used to have a much larger forested area.

The Western Ghats are mountains that run parallel to the west coast of India. They are a World Heritage Site, and among the eight ‘Hottest Hotspots’ for biodiversity.

The rainforests on their slopes are home to an incredible number of species, including Asian elephants, sambar, sloth bears, and leopards.

10% of India’s critically endangered tiger population are found in the region.

India’s Andaman and Nicobar Islands lie between the Bay of Bengal and the Andaman Sea. The islands’ rainforests are home to endemic species of Boar, as well as Saltwater Crocodiles and Dugongs.

Where Are Rainforests Located in South East Asia?

Vietnam has lost much of its rainforest due to war and logging. Less than 20% of the country is now forest.

Cúc Phương National Park, in the north of the country, is Vietnam’s largest forested area. Animals that live in this beautiful and diverse rainforest include Macaques, Gibbons, Slow Loris, Pangolins and Civits.

In 2005, a study found that Cambodia had the third highest rate of deforestation in the world, after Nigeria and Vietnam.

The rainforests on the western slopes of the Cardamom Mountains are an important ecoregion. They are home to more than 60 internationally threatened animal species. Surveys have found them to be among Asia’s most important biodiverse regions. Animals found here include Indochinese Tigers, Clouded Leopards, Dholes, and Malayan Sun Bears.

Laos is a landlocked country (i.e. it has no coast) located between China, Cambodia, Vietnam and Thailand. Rainforests and monsoon forests (which have long dry periods) in Laos are home to Indochinese Tigers and the critically endangered Saola (a forest-dwelling bovine)

Thailand lost a huge amount of its forested area in the 20th century, mainly due to logging. The country’s teak industry was a major part of its economy.

In the 1980’s a flood, caused by deforestation, led the Thai government to impose a complete ban on logging.

Malaysia is one of 17 ‘Megadiverse’ countries. These countries are home to the majority of the Earth’s species. Around two thirds of Malaysia is covered in rainforest. A huge amount of animal and plant species are found in these regions, including Tigers, Leopards, and Sun Bears.

Borneo is the third largest island in the world. The island is divided between three countries: Indonesia, Malaysia and Brunei.

The rainforest in Borneo is 140 million years old: some of the world’s oldest. It is home to many endangered animals, such as the Bornean Orangutan, Bornean Pygmy Elephant, Bornean Clouded Leopard, Bornean Rhinoceros and Proboscis Monkey.

Indonesia is a country that covers over 14,000 islands, including Java, Sumatra, and parts of Borneo and New Guinea. 10% of the world’s rainforest is found in Indonesia, and almost 40% of Indonesian bird and mammal species are endemic. Indonesian animals include the Sumatran Orangutan and the Indonesian Dragon (the world’s largest lizard).

The Philippines is a Megadiverse country, despite losing much of its forested area in the 20th century (In 1900 80% of the land was forest; by 1999 this had fallen to under 20%.)

Animals that live in The Philippines’ rainforests include Civits, Pythons, Cobras and Saltwater Crocodiles.

The Philippines’ Luzon rainforest has lowland and montane regions, and is the best known of The Philippine’s forests.

Where Are Rainforests Located in Australia?

Australia’s Daintree Rainforest is a tropical rainforest located in the north of Queensland. This beautiful area is unusual in that the rainforest comes right down to the sea. Many of Australia’s famous animals live here, including platypuses, echidnas, bandicoots, and kangaroos.

You can find out more about this area – and see where it is on a map of Australia – here: Daintree Rainforest.

Where Are Rainforests Located in Central America?

Central America is made up of seven countries: Belize, Costa Rica, El Salvador, Guatemala, Honduras, Nicaragua, and Panama. Deforestation has meant that the rainforests of Central America are now fragmented.

The Monteverde Cloud Forest is located in Costa Rica. It covers over 26,000 acres and contains over 2,500 plant species.

The Lacandon jungle in Mexico, is North America’s largest montane rainforest, and is home to Jaguars, Red Macaws and Swamp Crocodiles.

Although most of the rainforest that once covered much of the Caribbean islands has been lost, some patches do remain. Various schemes are in place to preserve and expand the tropical forests of the region.

On the islands of Cuba and Isla de la Juventud, the Cuban Moist Forests is a tropical moist broadleaf forest ecoregion. Endemic to the region is the Cuban Solenodon, a small mammal with poisonous saliva.

Where Are Rainforests Located in South America?

You can find out more about this amazing region here: Amazon Rainforest.

Over 85% of Brazil’s Atlantic forest has been lost to deforestation. Despite this, it is still an important region, with biomes including tropical rainforests and mangrove forests. Animals that live here include Golden Lion Tamarins and Maned Sloths.

The Australian island state of Tasmania is famous for its temperate rainforests, which are home to many of the country’s most famous animal species.

Australia’s largest temperate rainforest is found in the north west of the island in an area called The Tarkine. Tasmanian Devils, Echidnas, Quolls and Platypuses are all found here.

North America’s Pacific temperate rainforests ecoregion is the largest area of temperate forest in the world. It stretches from Northern California to Kodiak Island in Alaska, lying on the western side of the mountains of the Pacific Coast Ranges.

Growing in the Californian forests is the Coast Redwood (Sequoia sempervirens), the world’s tallest tree. The Marbled Murrelet, a small bird that feeds at sea during the day, returns to the trees of the Pacific forest in the night. Black bears live in the forest, and north of the Canadian border grizzly bears are also found.

Where Are Rainforests Located? Conclusion

We hope that you have enjoyed finding out where the world’s most famous rainforests are located. Although there are rainforests found in many parts of the world, many are a fraction of the size they once were. Because rainforests provide such an important habitat, we should do all that we can to protect those that are left.