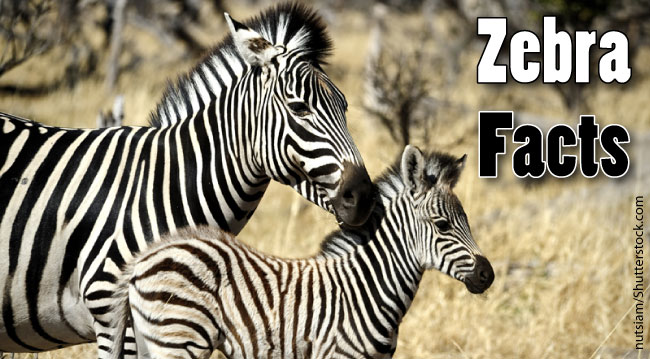 Zebras are some of the most recognisable animals in the world. Most children will be able to identify this distinctive member of the horse family by its black and white stripes. This page contains zebra facts for kids and adults, and is part of our African Animals series.

Zebras are a group of several species of African equids (members of Equidae, the horse family).

Zebras are highly distinctive due to their black and white striped coats. They are generally social animals that live in a wide range of organisations from small harems to large herds.

The Plains zebra is the commonest and most widespread zebra species.

Where Do Zebras Live?

Grevy’s zebras live in semi-arid grasslands and sub-deserts in Ethiopia, Somalia and Kenya.

The Plains zebra’s range stretches from the grasslands of East Africa to the scrubby woodlands of southern Africa.

Zebras are 4.2 to 5 ft (1.3 to 1.5 m) tall and weigh 550 to 990 lb (250 to 450 kg). Grevy’s zebra is the largest and the plains zebra the smallest. Their distinctive stripes differ between the 3 species. The Grevy’s zebra has the thinnest stripes which extend all the way down to their white belly; on the hindquarters, the stripes are vertical until above the hind legs. The mountain zebra has vertical stripes on their neck and torso, but horizontal stripes on their haunches. Scientists argue that zebra have white coats with black stripes. This is because the stripes end on their belly and toward the inside of the legs, and the remainder is all white.

There are several possible functions of the stripes. One of these is protection from predators; when they are in a group, their combined stripes make it difficult for predators to single out just one zebra to chase.

You can see just how large a zebra herd can be in the video below. Listen out for the strange sounds that zebras make.

Like horses, zebras have four gaits, i.e. walk, trot, canter and gallop. Zebras are generally slower than horses but can still run at speeds of up to 35 mph (56 kph). Often, the lead stallion sounds an alarm when danger is spotted and then stays at the rear of the herd or group to defend against predators and allows the mares and foals to escape. When chased, zebras often zig-zag from side to side, making it much more difficult for predators to catch them. Zebras usually rely on their great stamina to outrun predators, but if they are cornered, they will rear up and kick or bite the attacker.

Zebras feed almost entirely by grazing on grasses, but sometimes browse on leaves, herb, shrubs, twigs and bark. They have a highly adapted digestive system which allows them to live on diets of very low nutritional quality.

Zebra females (mares) can usually have their first foal when they are 3-years-old. Males mature much more slowly and are not able to breed until the age of 5 or 6. Females are pregnant for 12 to 14 months and can give birth to 1 foal every 12 months. Newly-born foals are precocious, i.e. they are able to stand, walk and suck milk soon after birth, and weigh 55 to 88 lb (25 to 40 kg) at birth. Foals are weaned after about a year.

The mountain zebra and Grévy’s zebra are endangered. The plains zebra is much more plentiful, although one subspecies, the quagga, became extinct in the late 19th century.

We hope that you have enjoyed these zebra facts. You can find out about many other incredible African animals here: African Animals.