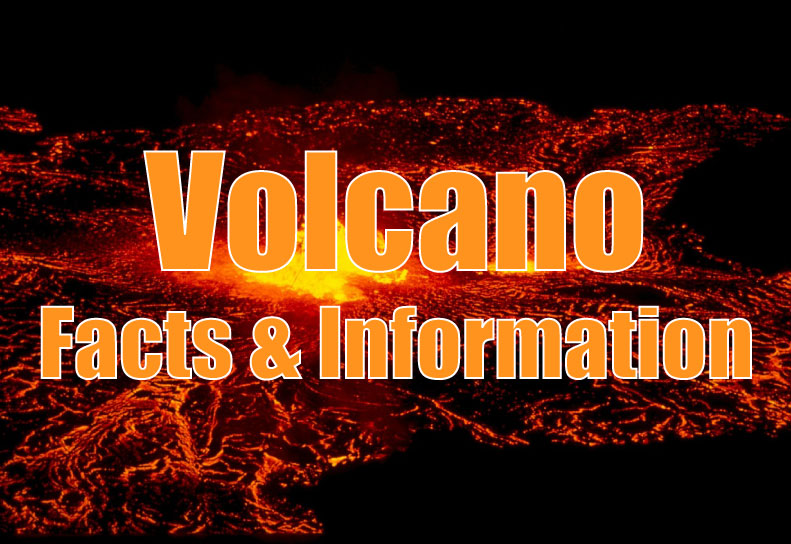 This page contains volcano facts for kids young and old. You’ll learn what volcanoes are, where they are found and how dangerous they can be!

You’ll also learn about some famous volcanoes, some of which are still active!

Introduction To Volcanoes For Kids

If you go outside and touch the ground it will probably be quite cool. If it’s a hot day then the ground may be a little warm from the sun, but it will quickly cool down again in the night.

If you dig down far enough, you will break through the hard, cool, surface of the Earth and reach a much hotter and softer layer.

Imagine a place so hot that rock turns into liquid! That’s what it’s like down there.

A volcano is formed when liquid rock from deep underground bursts out through the hard outer surface of the Earth.

This is called an eruption.

Volcanic eruptions can be extremely powerful, creating huge explosions and rivers of red hot liquid rock that burn everything in their path.

Sounds pretty exciting to me! Let’s learn a bit more about volcanoes…

The surface of the Earth is known as the crust. Just like the crust of an apple pie.

Er, anyway, the crust is broken into seventeen huge parts. These parts are called ‘tectonic plates‘. The tectonic plates float on top of a hot layer of softer rock.

It’s a bit like sheets of broken ice floating on top of a lake. But much, much hotter!

Volcanoes are usually found where these tectonic plates meet, or where they are very thin. Basically, the liquid rock from deep under the ground is forced out of the cracks between the plates, or it bursts out where the plates are at their thinnest.

Underneath the Earth’s crust, liquid rock can form into large underground pools, called magma chambers. A bit like the apple in an apple pie.

Mmmm, apple pie, there it is again.

Where was I? Ah yes.

Volcanoes are formed when liquid rock from these magma chambers is pushed through the Earth’s crust.

The liquid rock is called magma when it is below the surface. Once it has emerged it is called lava.

When the lava is escaping from the volcano, the volcano is said to be ‘erupting’. Eruptions can be started by explosions caused by water or gas coming into contact with the liquid rock under the ground.

Eruptions can be very powerful, with lava exploding out of the volcano in tall fountains that reach hundreds of metres into the air.

Rivers of lava can flow downhill, spreading out to cover a wide area. Molten lava will devastate anything that lies in its path.

When it erupts from a volcano, the temperature of molten lava is around 700 to 1200°C. That’s very, very hot! It’s difficult to imagine the kind of heat needed to melt rock!

There are actually several kinds of lava. A common form of runny lava is molten basalt, which cools into a hard, black rock.

The Giant’s Causeway in Northern Ireland is formed from basalt from an ancient volcanic eruption. It is a very strange landscape!

Some lava is less runny and oozes, rather than pours, out. An example of this kind of lava is rhyolite. This oozing lava can be even more dangerous, as pressure can build up underneath it, causing bigger explosions.

Before a volcano erupts there is often an explosion that throws volcanic ash into the air. Volcanic ash is made of small fragments of rock, glass and minerals. Sometimes it can be even more dangerous than the lava, as it is very hot and heavy.

The ash settles around the volcano, and the lava then flows over it and solidifies.

Every time a volcano erupts, new layers of ash and lava are added to the pile. These layers build up to form a cone-shaped mountain with a hole at the top. This hole is called the crater.

Volcanoes can either be active, dormant or extinct. However, because volcanoes can be around for millions of years, these definitions aren’t awfully scientific.

Active volcanoes are ones which are still likely to erupt, or have done so recently. By recently I mean in the last 10,000 years!

That can be quite a short time when you’re talking about rocks!

Dormant volcanoes haven’t erupted for even longer than this. But they still might, one day.

Extinct volcanoes are unlikely to erupt ever again. But sometimes they do, just to prove us scientists wrong.

Between eruptions volcanoes can still smoke, and lava can still bubble away in the crater.

Sometimes the lava solidifies, but this doesn’t mean that the volcano is necessarily extinct. When this happens the eventual eruption can be even more explosive. Boom!

Why Are Volcanoes Dangerous?

Volcanoes can be dangerous in several different ways.

The most obvious danger is the lava. It is so hot that it will burn anything it touches.

In 1950, Lava from an erupting volcano was flowing towards the Hawaiian city of Hilo. The US Air Force had to drop bombs on the lava to divert the flow away from the city.

The explosions from a volcano are also very dangerous.

In 1883, a volcano on the island of Krakatoa began to erupt. After some minor eruptions, the volcano exploded violently. Very violently, in fact. The explosions were heard over 5,000 miles away!

The cloud of ash from the volcano darkened the sky all around the world, and made the whole north part of the world slightly colder for a year, perhaps longer.

The explosion completely blew away two thirds of the island.

That’s right, much of the island completely disappeared into the sea.

However, that wasn’t all. The explosions were so big that they produced huge waves that swept across the ocean destroying everything in their path. These waves proved to be even deadlier than the explosion.

So there are the explosions. And the lava. But often the worst part of all is the ash. It’s a bit like the ash from a bonfire in the garden. But there’s much, much more of it, and it’s much, much hotter. And it’s made of rock, not wood.

One of the most famous of all volcanoes is Vesuvius, in Italy. A long time ago, in AD79, it suddenly erupted. The explosion sent out a deadly cloud of thick, hot ash. This ash was so thick and fell so fast that it completely buried the cities of Pompeii and Herculaneum.

Mont Pelée is a volcano on Martinique, an island in the Caribbean. In 1902 it erupted and sent an ash cloud over the city of Saint-Pierre. Only two people in the city, and a young girl who escaped on a boat, survived.

I hope that these facts about volcanoes for kids have inspired the next generation of volcanologists.

P.S. Want to learn about some of the world’s most famous volcanoes? Here’s a great article… Famous Volcanoes Throughout History.