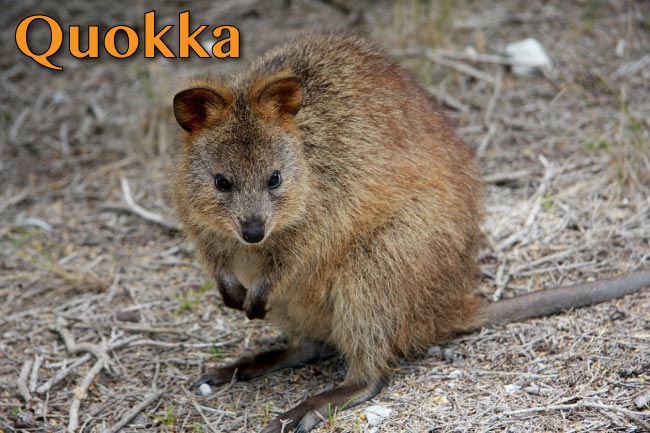 Quokka facts, pictures and information. The quokka is a cat-sized marsupial that is only found in a small region of Western Australia.

This page is part of the Active Wild Australian Animals series.

Quokka Facts At A Glance

How To Recognize A Quokka

The quokka is a small macropod with wiry brown-grey fur, rounded ears, and small, dark eyes.

A macropod is a member of the family Macropididae, otherwise known as the ‘kangaroo family’.

The quokka resembles a small kangaroo, having large hind legs and feet, and relatively small front limbs and hands.

Like the kangaroos and wallabies to which it is related, the quokka moves around by hopping on its rear legs.

Where Do Quokkas Live?

Quokkas are endemic to Australia, and are only found in the state of Western Australia.

If an animal is ‘endemic’ to an area, it means that it is only found in that area, and nowhere else.

One island that is particularly famous for quokkas is Rottness Island. This island was discovered in 1696 by a Dutch explorer named Willem de Vlamingh, while on a mission to locate a missing ship.

De Vlamingh saw quokkas on the island and, thinking they were giant rats, named the island “Rottenest” which is Dutch for “rat’s nest”.

Another island with a significant quokka population is Bald Island near Albany, a port in Western Australia.

The video below was taken at Rottness Island.

The quokka is usually found in areas with tall grass and water close by. The grass provides shade and protection from predators. The quokka is also known to climb trees and shrubs.

Quokkas are nocturnal (active at night), and spend the day either sleeping or resting in the shade (males will occasionally fight over spots that offer the best shelter).

Quokkas live in family groups that are led by dominant males. Large gatherings of up to 150 individuals can form by water holes at night.

What Does A Quokka Eat?

A quokka’s diet consists of leaves, bark and grass. It can survive for long periods without food and water.

The quokka doesn’t seem to mind the presence of humans, and will often approach observers. Due to its friendly, inquisitive nature – and its permanently cheerful facial expression – the quokka has become known as the ‘Happiest Animal In The World’!

Quokkas are classified ‘vulnerable’ on the IUCN Red List. Once widespread on the Australian mainland, quokkas were preyed on by non-native species such as foxes, dogs and cats, which led to their numbers being drastically reduced.

For this reason, quokkas are now more abundant on islands that have remained out of the reach of non-native species.

Thanks to conservation efforts, it is believed that the number of quokkas on the mainland is stabilising. They are also well-protected on the islands: visitors to Rottness Island can be fined if they handle a quokka.

We hope that you have enjoyed learning about the quokka. Discover many more amazing Australian animals here: Australian Animals List.